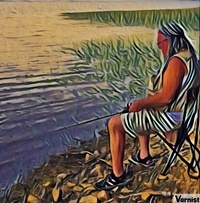 It is the kind of day best taken n

inside a truck — heat on, wipers

and the rain and leaves falling

in unison but not of equal parts –

maybe a hundred raindrops for

every leaf all day long so a lot fell,

a conclusion of the day

there inside the truck:

a kind of moveable meditation

thoughts giving them the opportunity

The rain was cold and the air

The heart was warming the way it will

when given a chance.

I pulled into the driveway,

glad I had turned the furnace

on a couple days before.

Stopped.  The wind and rain

had stopped.  Walked to the porch,

opened the door, stepped in.

There are moments I would

The changing nature of time says,

“I give what is not what

I lament this fact,

cast the net for a memory

of gaps so between then

and now I create details

I know how a story longs

I admit I’m chasing an echo,

the ghost of a touch,

a moment whose jagged

I know what time says

is true; I know what my heart

wants to do – as always

I am caught between the two.

The echo of the whirlwind confused

the timing of when God’s voice

was heard. Get real.  Those 33 questions

Job never heard out of that whirlwind

nor their response hearing in fear

since it carried the whispered,

measured voice of God, the metaphors of eternal

life accessible as only desperate

hearing can receive in the afterglow

of such a storm.

The majesty and multiplicity

of life leaves no stone unturned,

no depth nor height not explored,

refusing no story — no beginning, middle,

Some writer who could not bear what was

being written confused the sequence to

distract the divine metaphor of facts.

We all know after a storm truth comes

in a whispered form of longing.

The seventh dream eluded me

and in so doing the other six

were lost as I pursued what left

My hearing isn’t what it once

was and so what I thought

I had gained from the first six

was lost in pursuit of what

my grasp could not touch.

It felt so real that fantasy

was the only word I had for what

had been before it called me by name.

Now, I am in the wilderness,

two suns one in each quadrant

my feet above the ground, I leave

no track for my return; all  water is a bridge

to the other side – I am not returning.

And I do not know if I am remembering

the echo or hearing it again

only that I’m lost with the promise

Byron Hoot was born and raised in Morgantown, West Virginia, lived there until he went to college – a twelve-year excursion.  Now he lives in northwestern Pennsylvania. . .  still in Appalachia. He has recently had poems in The Watershed Journal, Tobeco Literary Arts Journal, on www.northsouthappal.com./appalachian-literature.html. and in Pennessence.  He is a co-founder of The Tamarack Writers (1974) and The Fernwood Writers Retreat (2019).  Proprietor of Hootnhowlpoetry.com.