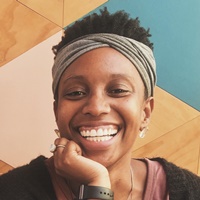 Leonard was always the expressive one, not Will. Leonard was an artist, so expression was his thing. Everyone kept telling Will that it was strange he hadn’t cried yet, but crying wasn’t his thing. That, too, was Leonard’s. Will was sick of everyone saying that, and he was sick of thinking of how he told Leonard to get a “real job” before they hung up the phone that last time.

“Hi Will. I’m Amy, the instructor. The rest of the class is already in there, so we can head back. Is there anyone else joining you? The sheet said one, but—”

“Okay, great.” She motioned for him to follow her down a dark, cramped hallway and into the aggressively lit studio. Paint splatters covered every surface. Mediocre pieces scattered around the room taunted him. The prized depictions of the world’s most breathtaking images depicted as mundane scenes. Or worse, the abstract visualizations of emotions he would never understand. She showed him to his painting station at the end of the communal table. With squinted eyes, he studied his surroundings: the creaky wooden stool, the powder-white canvas held up by a cheap and splintery wooden easel, and the paint-crusted brushes next to the mason jar of water and temporarily pristine primary colors. There were five other stations set up the same way—two on each side of the table, and one more at the far end, across from Amy’s set up. Amy gave him a close-mouthed smile as she handed him a stiff apron and walked the length of the room to her station. He placed it on the stool and sat down.

Will couldn’t believe his life. The blinding lights made his incessant headache worse. The fumes didn’t help either. It made him sick, not because it was strong, but because it tricked him into thinking his brother would come shuffling out of the bathroom, buoyant and mosaic from another day of work.

Instead, out of the bathroom tumbled a gaggle of pink, white, and giggles. He had failed to pay attention to the “sip” part of the “Paint and Sip” class he signed up for, as well as the “no refunds” in the fine print.

“You’re getting married!” four of the five women yelled in unison.

A pop sounded from behind his easel at the other end of the table, followed by boisterous, high-pitched cheers. Cheap, alcohol-scented effervescence permeated the air and mixed with the pungent acrylic that he smelled even in his dreams—nightmares—he didn’t know what to call them.

It made his stomach lurch.

“Miss, uh, Amy? How long is the class again?” He knew, but he hoped he was late enough to hurry time along the way it seemed to always want to do for him.

“An hour,” Amy said. “We’re a little behind, but don’t worry. This painting won’t be too complex.”

“Oh, okay.” Clearly, he thought, eyes fixed on the pieces on the wall. Leonard would have loved this.

“Don’t be nervous! You look like you have an artist in there somewhere,” she said with a wink. “Okay, class. Let’s get started!”

The bachelorette party whooped and clinked their glasses.

They were meant to paint a house on a hill. Amy talked them through the basics of mixing colors, picking the right brush, and the amount of pressure to use, all while trying to lead by example. Will tuned her out. He’d heard this lecture from Leonard many times. Never asked for it, but Leonard couldn’t help but wax poetic about his one true love.

Will dipped and blended and let the coarse hairs of the brush kiss the canvas, and the sound of prosecco-powered giggles and seemingly endless toasts faded away. Leonard’s voice replaced Amy’s, and for the first time, he let his brother teach him how to paint. Shapes and colors began to fill Will’s canvas as Leonard’s voice whispered deep inside his inner ear.

The colors on the once-blank canvas began to form a watery blur as if Will had unknowingly switched from acrylic paint to watercolor. He tried to blink away the illusion and suddenly, he felt a drop of liquid hit his bare knee. He paused.

His brush fell to the floor as he placed his head in his hands and wept.

When Amy finally came to check on him, she gasped and placed a hand on his shoulder. “Oh, Will.”

Embarrassment flooded his body. He was afraid to look. The instructor’s reaction made it clear that not only did he openly cry in a Paint and Sip class, but he clearly didn’t have the artist gene that she believed. With a loud and heavy sniffle, he lifted his head, steady streams still emptying from his soul and falling from his eyes. The bachelorette party gathered around his station and made varying noises of surprise.

“Um… That’s definitely not a house on a hill,” one said.

“I’d love to know why this guy is even here,” said another.

Will wondered the same.

He finally looked up. On the easel, staring back at him was his version of his favorite pair of eyes. The crow’s feet crinkle at the corners. The coffee and caramel pupils that he always envied. Pure white irises that shone with wonder.

“Who is it?” Amy asked, eyes fixed on Will’s glistening easel.

“My brother,” Will said. Another tear fell.

Leryl Joseph  is a passionate storyteller and creative thinker. She published her debut novel, The Table, in 2017 through an independent press. Currently working as a Copywriter and Creative Director, she continues to write and create with one purpose in mind: to help others feel less alone. She hopes to inspire others to do the same. Learn more about Leryl and her work on her website leryl.com.