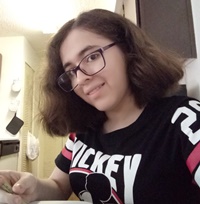 When the Clock Strikes

The small analog clock’s ticking fills the space. The man is wearing a fancy black vest while the woman is wearing a fancy bright red dress. Both of them are on opposite sides of the beds of a motel room, the lady on the right, the man on the left. One light bulb is failing to keep up. Despite the lights trying their best, the room remains dim and lifeless.

“So…” Harry says. “Anything else you like to add?”

“I don’t think there’s much to say anymore,” Abby says.

Harry makes his move. He stands up from his bed and moves to the front side of the room. He grabs the big, grey luggage from the room and moves back to the bed.

“Listen, I don’t want the worst case to happen. I mean, we’ve been through so much together, you know?” Abby says.

“That doesn’t change anything,” Harry says, removing the clothes from the luggage. “For the past few years, I had to deal with your nonsense. I don’t want to do this either, but I’m left with no choice.”

“You said that before. You said last time, yet you continue to be the same. I can’t take your word for it anymore.”

Harry throws the clothes onto the ground, making them no longer of importance.

Abby moves closer to Harry, preventing his actions from moving any further. She puts her hand on top of his, feeling the warmth and dryness of his skin onto her delicate fingers.

“I suppose I can’t blame you,” Harry says. “I just feel sorry for you.”

“I can’t see myself doing this. I’m not that kind of person and I know I’m not. Countless times, I’ve been doing these things for you, so we can be together.”

Abby shifts herself closer to Harry, embracing him from behind. The light that shines on both lovers, stops flickering. The clock ticking stops ticking. The two stands there, motionless.

“I try helping you, I try taking care of the kids, I even try to stay home to not make any trouble for you,” Abby says.

Harry shifts his body from Abby, removing her soft hands from him. He resumes to remove the remaining clothes from the luggage. A face of disappointment forms on Abby.

“It’s not enough. There’s still so much you have to learn if you want this—us—to work,” Harry says.

After throwing mountains of clothing on the ground, Harry reached the bottom of the pile. A black box lays on the luggage with a lock to seal the box. Abby fixes her brown, curly hair, moving the front to her right ear.

“Would you like me to help you with anything else?” Abby asks.

“Can you grab the keys?” Harry asks, motioning his hand to the drawer.

Abby open the drawer. She puts her hand inside to receive a small silver key. She walks back to her lover, handing him the key.

Using the key, he unlocks the black box. He opens it and grabs the item that lays inside of it. He raises a loaded pistol, closing the box. He puts the pistol onto the pocket of his vest.

“Are you sure you want to do this?” Abby asks.

“Who else is going to do it?” Harry says.

“I know that, but that’s the gist of the job. Is your mother still in town?”

“She is, but I don’t think she would like to see me again. Not after learning the truth about us.”

Harry returns to the luggage, unzipping a small pouch on the top cover. Inside of it was a stack of money. He divides the stack and hands one to Abby.

“I have a sister in Michigan. You can take the train in the morning,” Harry says. “She would likely take you in.”

Abby takes the money as Harry takes the other half. The silence returns back into the motel. Abby help Harry pick up the clothes, placing them back into the luggage. The lights of the left side of the bed resumes to flicker. The clock continues to tick, closer to the midnight mark. Abby zips the luggage as Harry puts on his shoes, fixes his tie, and turns to look at Abby one last time.

“I guess this is goodbye…” Abby says.

“Yes,” Harry says. “The years were good while they lasted. I’m sorry that it had to come to this.”

Harry leaves the room with the pistol still on his vest. Abby stands in an empty motel room with the scattered clothing on the ground. She sits back down on the left bed beside her. The lights resume flickering until it stops working, creating darkness on the opposite side of the room. She weeps, taking in the isolation as the clock strikes twelve.

Nicole Carpio left her hometown to study creative writing in Orlando, Florida at Full Sail University. When she’s not writing stories, she plays video games with her faithful dog Poncho, or voice act on web projects. Follow her on Twitter @NC_Write.