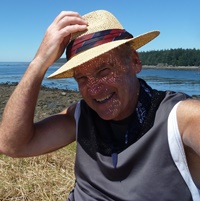 When my grandmother was hospitalized, I received a phone call from my dad. “Drop what you’re doing and drive home,” he instructed me. “Grandma’s in intensive care and not expected to live.”

A few hours later my wife and I were at Grandma Effie’s bedside. She was alert and reminiscing about her favorite mountain, Mount Rainier, the fourteen-thousand-foot peak she summited in 1919 and 1920. Effie usually referred to the mountain in its original Salish name, “Tahoma.” She spoke about her life—her marriage, her years as a teacher in a one-room schoolhouse at Panther Lake—but she kept coming back to “our beautiful mountain, our Tahoma.” Grandma Effie died less than twenty-four hours later.

That was years before our three kids were born, but Effie left me her treasured handwritten climbing journals, which helped me pass along her stories to our children. Effie’s adventures became part of our family folklore, stories our daughter Madeline grew up with.

Now in her mid-twenties and inspired by her great-grandmother, Madeline decided to climb Mount Rainier in Effie’s memory. “Great-Grandma loved that mountain, and her focus was on family and adventure. She made this climb with her husband and her dad; that’s want I to do.”

A climbing party was formed consisting of Madeline, her husband Andy, two friends, and me. The first thing Madeline did was outfit herself with climbing boots. “I went to a store that had seven different kinds of mountaineering boots, and six of them were for men. I tried on a pair in my size, and when the clerk asked me how I liked them, I told him I didn’t know, because there weren’t any others to compare to. It was a hundred years ago that my great-grandma summited Rainier. I see women on climbing walls and doing extreme sports, but mountain climbing itself hasn’t fully integrated over the years. I’m lucky I had a family who encouraged and celebrated women in outdoor adventure.”

We began training six months before the climb, exercising daily and hiking weekends, gradually working our way up steeper grades. Madeline hiked with liter-size plastic bottles in her backpack and built up her endurance by increasing the amount of water she carried each trip. Some weekends Madeline hiked by herself, which was something she’d never done before. “Hiking has always been a social, fun activity. Now it’s training,” she grinned, adding, “but it’s still fun.” Our preparation eventually culminated in ascents of Mount St. Helens, Glacier Peak, and Mount Adams.

During our months of training, I went back and reread Effie’s journals, beginning with, “to wish us the safe fulfillment of our anticipations.” To put her climb in historical perspective, Effie first summited when the Treaty of Versailles was signed, marking the end of World War One. Her second summit occurred when women gained the right to vote.

“To me,” Madeline reflected, “Great-Grandma was ahead of her time. She wasn’t the first woman to climb Rainier—that honor belongs to Fay Fuller, who summited in 1890—but when Great-Grandma made her climb, it was still noteworthy for a woman to accomplish that feat.” Madeline smiled. “Effie might be able to claim a first in that she scaled the peak wearing pants.” Early photographs of women climbing Mount Rainier show them in long, flowing woolen skirts. Effie, ever practical, borrowed her brother’s trousers.

By late summer we were fit, confident, and ready to take on Rainier. We chose the most commonly used route—the Disappointment Cleaver trail—and drove to the parking lot at Paradise Lodge.

From there we hiked up to Camp Muir, where we made our base camp. As our climbing party sat in a small circle on the snow, Madeline said, “I grew up knowing my great-grandma made this incredible climb, hearing stories that captured her love for this rugged, beautiful place. Great-Grandma could have walked right here. Now I’ll see what she saw.”

While Andy got the camp stove going for an early dinner, Madeline said, “I appreciate my great-grandmother’s efforts even more when I look around. I’ve got crampons and high-tech climbing boots; she had corks nailed into her shoes. I’m wearing layers of moisture-wicking, insulated fabric; she wore her brother’s wool pants and long-johns. We brought an ultra-light propane stove; she carried firewood.”

For dinner, I held open an aluminum foil pouch while Andy poured in boiling water. Stirring my freeze-dried meal, I told Madeline about Effie’s journal entry describing their first dinner, camping at Longmire. Effie wrote, “We built a fire and prepared our supper of boiled potatoes, steak, coffee, sandwiches and cream puffs.” Effie described eating by moonlight, and “after supper we rolled up in our blankets, and using Mother Earth as a bed, lay down to sleep.” Breakfast the next morning consisted of “eggs, meat and potatoes, coffee and bread.”

What hadn’t changed, I told Madeline, is how physically demanding it is to climb the most heavily glaciated peak in the lower forty-eight states. With a vertical elevation gain of more than nine thousand feet over a distance of eight miles, only half the climbers who attempt Mount Rainier reach the summit.

Madeline, Andy, and I laid out our ropes, harnesses, and crampons beside our tent and tried to get some sleep. At 11 p.m. we fixed a quick breakfast of instant oatmeal, put on our gear, and roped up. Straining through the darkness to see the mountain, Madeline pointed out tiny strings of lights—“like slowly moving glowworms”—climbing parties beginning their ascent.

Effie’s journal entry on the final approach reflected parallel sentiments. “It was some stretch . . . I had to stretch every muscle and nerve to make it, and felt so seasick that only the desire to make the top kept me going.”

Madeline confided to me, “There were times when I thought, I don’t want to keep going, but Andy was there to say, ‘You can do this!’ and, of course, I remembered Great-Grandma Effie.”

Contrasting with the physical exhaustion were moments of awe-inspiring beauty, like seeing the perfect mountain shadow on the snow as the sun rose over Disappointment Cleaver: stark white on one side, pitch darkness on the other. As we ascended, the direct rays of the rising sun struck our bodies, with a rejuvenating effect.

Effie recounted satisfying views in her journal, at one point writing, “The view from this hill was wonderful. On one side loomed the mountain, rugged, steep and white. On the other side was the Tatoosh, with a purple, hazy background, out of which rose Mount St. Helens.”

In another entry, Effie noted, “All the time we climbed, we were on a ridge and could look down upon the Tahoma Glacier, which was full of great crevasses.”

At the halfway point of our ascent, our party approached a crevasse too large to step or jump over. We came to an aluminum ladder laid over a narrow portion of the yawning space, and each of us gingerly crawled across it to the other side. “It was scary going over that,” Madeline told me, “but there was a sense of safety being on the rope with the people I trust, the guys who know me best, my husband and my dad.”

When I crossed, I couldn’t help glancing down into the crevasse, fifty or sixty feet deep, glowing with the neon-blue of compressed ice. It pulled at my attention like a magnet. Effie noted identical amazement. “It was a wonderful sight to look down into those great, cold and brilliant colored crevasses.”

By 8 a.m. Madeline and Andy and I were just below the summit. Climbing over the edge of the volcano, the weariness and exhaustion disappeared.

Effie related similar feelings in her journal. “The little unpleasantries and hardships are easily forgotten, but the memories of the wonderful old Tahoma will remain with us forever.”

Our party scaled the lip of the crater and stowed our gear in a heap, then walked to Columbia Crest, the high point of the summit, where we cheered our accomplishment. With arms outstretched, Madeline slowly turned in circles, surveying 360 degrees of breathtaking scenery. “I want to commit it all to memory and bring it home with me.”

We posed for pictures, congratulated one another, then began our descent. Hours later, we reached our car at the base of the mountain. We could finally proclaim, “We did it,” with Madeline adding, “and just like Great-Grandma, it was me, my husband, and my dad. We stood on top of the world, but we weren’t alone. Effie was there at the summit with us.”

“She was,” I answered, wrapping Madeline in a hug. “A hundred years later, and Great-Grandma was there. You pushed yourself to the limit, then pushed some more; you followed in her footsteps.”

“I see Rainier every day on my drive to work,” Madeline said. “It’s almost as though it’s in our backyard. Now I won’t just see a mountain . . . I’ll picture myself standing on top. In today’s culture, you go, you take the selfie, and you check it off the list. That’s where the experience ends. You did it and it’s over. But this will remain with me forever. Effie made the climb because she treasured her mountain. The experience made her feel alive. It was a defining moment that helped Great-Grandma know herself. I understand how connected this adventure made her feel.”

I unlocked the car and, reaching into the glovebox, grabbed Effie’s climbing journals and presented them to Madeline. “These are yours now . . . you’ve earned them.”

Madeline’s eyes filled with tears. Holding the journals overhead, she said, “We stood on the summit of the beautiful mountain, our Tahoma. You, me, Andy and Great-Grandma.”

Mike Nolan  lives in the small costal town of Port Angeles, USA, across the water from Vancouver Island, BC. Mike has a web presence at mikenolanstoryteller.com.