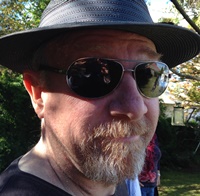 As a picture of modern urban poverty
it almost breaks your heart.
Old Mother Hubbard’s bare boned cupboard,
her dog drooling optimistically.
What happened to Mr. Hubbard?
Down the pub most likely, drinking away the family savings;
run off with Mary Lou from the office
that short sighted gold digger. Or perhaps
he’s dead from a coronary occlusion,
struck down by falling space junk.
Maybe it’s the old man’s bones
she’s been feeding the dog all this time?
And what sort of dog is it? A corgi? A rottweiler?
Where are her children? Merchant bankers all.
What ever happened that dog ain’t getting any fatter
what with the price of bones these days.
All these fruitless hypotheses.
It only remains to be said that in threadbare rags
Old Mother Hubbard doesn’t have two sticks to rub together,
the dog next on the menu.

What can I say to you that isn’t already a podcast?
Two-and-a-half hours on the road with lunch
in Wangaratta is hardly a life worth living.
All the cheese has melted like the ice caps.
Lava might be no worse. I swear to God this prayer
is no better than a yap flying by on the wind.
The rubbish bin is full of dead and injured magpies.
I saw the man who put them there running away.
My clothes are incongruous
with the general philosophy of the times.
The policeman did not find the drugs
you had stashed in your underpants
and from that moment your life was different.
Abstractions have too much influence.
My brothers once saw my identical twin
at the beach even though to my knowledge I have no twin.
I love your left profile more than your right,
your mug shot more than your happy family snap.
It’s got something to do with the ears.
I wanted to believe you but thought, why bother?
Is that me at the bottom of your suitcase
or someone else?
Where are you taking us?

The Virtue of Laziness

Why six feet instead of five?
Sure, things don’t get done
but everyone’s a whole lot happier.
War? Who could be bothered?
A burning cathedral? Ah, well…
better luck next time.
The pyramids would have been
more mysterious if they’d
been left on the drawing board.
As it is, who do we congratulate?
Who needs an empire, really?
Those ants are far too ambitious.
Why mow the lawn? It’ll all
just grow again tomorrow.
Ladder to success?
Nobody will appreciate that ulcer?
Aesthetics is a different proposition.
That hole you’re digging
just have to fill it in again.
Whatever’s down there
won’t thank you for it.
Everyone you ever knew.
The whole shebang
still trying too hard.

Nothing so nude as a bookshelf
without books, nor so empty
as those boxes full of leaving.
The ash in the fire place greyly conveys
its duty done as the carpet lifts
its footprints one last time. The easy
chairs shake off their indented ghosts.
Even dust has a memory,
and puts down roots. The rattling bones
of coat hangers in the echoing cupboards.
The windows never so clean. Soon
the removalists will arrive in their overalls
and heavy boots, reducing the longevity
of furniture to the science of cubic metreage.
Eventually we will close the gate
as the birds prepare to take possession
for the duration of settlement,
and the contract changes hands.

We’ll leave the ashes of my father
in a hole in the garden he grew
and extolled. It’s not quite the metre
deep my mother wanted me to dig
but it hasn’t rained, the ground is hard.
That’s my excuse.
It’s about as deep as the grave I dug
my sister-in-law’s cat beneath
the Acer tree, although memories
run deeper fertilised with time.
The garden’s sepia about to vanish
into the other half of dusk.
After the birds rise, the weeds in the guttering,
the new owners will come and disturb
the cosmic dust we have ourselves
agitated in the course of staying still.
Still as a boulder buried in the earth.
There’ll soon be no reason to come here
apart from nostalgia, when the course
of my current life opens on an empty
drawer. No disinterment. No exit line.
Not even a paperclip.

Mark O’Flynn is an Australian writer who has published four novels and six collections of poetry. His most recent book is a collection of short stories – “Dental Tourism.”