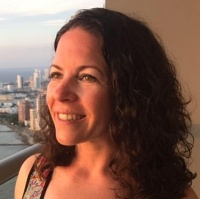 At 10:00 a.m., the tiny Alaskan village still sleeps in this unrelenting daylight. Not one walker crosses my path on my trek to the black-sanded beach; a hulking dog, wolf-like and menacing, watches me approach. Thankfully, likely weak from hunger, it can’t be bothered to lunge toward me.

It’s not supposed to be like this. I traveled here with my daughter, a recently hired elementary teacher in the village’s single school, to help her settle into her new rural life. Flying in the eight-seater airplane overlooking the lush greenery and wilderness below, I experienced a twinge of jealousy for her adventure. Imagine being a 21-year-old college graduate leaving everything behind to teach disadvantaged children in a village with only 400 people and one store! I expected my few nights here to be filled with unpacking her few possessions, playing card games, and likely spilling some tears as we thought about how far from home my only child would be.

Shortly after we arrived, though, we learned she was attending teacher training the next morning in the neighboring village a plane ride away, where she will remain until my departure. Not only was I ill-prepared for saying goodbye so soon, but I am now stuck here for the next three days without my daughter, the internet, television, music, or wine. Each of these would deliver comfort, but I have only her two cats to keep me company. Normally sweet pets, they are rattled from the long journey and unaccustomed to their new surroundings. Thank goodness I brought my Kindle—at least I can read.

I feel entirely cut off from civilization. Though I have traversed many foreign soils in the last two decades, nowhere has felt so strange or far from home, even though I remain in America. This might as well be another planet.

With nothing else to do, I keep walking. The utter quiet adds to the desolation of this land. A gentle yet chilling breeze whispers softly, competing only with the subtle groan of distant machinery, the swish of my blowing hair kissing my shoulders, and a lone bird’s cheerful trill.

Joyless, unlike this native songstress, I stare out at the craggy, porous rocks from which reedy green clumps sprout intermittently. The longer grass sways placidly, attempting to lull me with its heartless melody. A miniscule, unfamiliar insect tickles my hand; irritated, I squish it mercilessly.

Corpses of giant, rusted pipes litter the other side of the beach, carelessly thrust aside after becoming defunct, marring the pristine landscape. Yet, where else can they go? Like beached, dead whales, they are too immense to move and may rest for eternity, their metal flakes leeching into the dark, rippling water.

Crunching across the grainy terrain, my shoes kick away smashed shells and pieces of broken bottles, which the lapping strait has taken and reinvented into opaque, multi-hued sea glass. Though I’ve heard of the beauty of this trash-made-treasure, I remain uncaptivated by the sharp, jagged edges, picking up no souvenirs. The pearlescent sheen of a shell attracts my eye, but it’s merely a shard of its former glory.

Clouds hang low, skimming looming blue mountaintops. Shivering in my thin jacket although it is only August, I cannot fathom Alaska’s brutal winter, when the bitter, bone-chilling cold will permeate the air, seeping into and hardening the ground as well as the residents.

Despite the calm, despite nature’s majesty, I have never felt so alone, wanting to go home now, back to Pennsylvania’s warmth, trees, and people. Realizing only now that I haven’t seen any trees here, I miss the familiarity. Bring me back to my comfort zone and away from this savage, lonely environment.

There are more boulders on this small strip of beach than human beings in the entire village. Walking away, I trip and barely catch myself from falling, thwarting the land’s cruelty and escaping, for now, unscathed.

Cassandra O’Sullivan Sachar is an associate professor teaching first-year writing at Bloomsburg University of Pennsylvania. A former secondary English teacher in Delaware public schools, she received her Ed.D. in Educational Leadership with a Literacy Specialization from the University of Delaware. Her research studies and practitioner articles have appeared in diverse educational publications such as Inside Higher Ed, Edutopia, Faculty Focus, Modern English Teacher, and The Teaching Professor. After many years as a writing educator and researcher, she is searching to rediscover her voice as a fiction writer. She is beginning an MFA program in creative writing to work toward this dream.

THE SOWBELLY TRIO by James Hanna