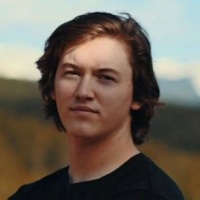 The Price for Green

In an empty colorless theatre, a man in a black plague doctor mask, who we will call The Doctor, enters the stage. There is a painter’s canvas and a stool, with an empty field of seats behind them. The Doctor sits in the stool with a newspaper in hand and reads.

The front doors of the theatre open, three individuals dressed in similar monochromatic suits as The Doctor enter. They take their seats.

The black masked painter notices and prepares his supplies. A single vile of black paint, another vile of white paint, a tray, and three different sized paintbrushes. With preparation completed, he paints. The stokes flow effortlessly. There are momentary pauses during his showcase looking at the crowd, seeing only three people remain throughout the duration.

The painting is completed. The Doctor stands and bows to his crowd of three, they applaud, then leave. The art is picked up by the painter and moved into a room with hundreds of pieces of art. Some paintings simpler, some more extravagant.

The Doctor takes the stage once more, looking at the seats. He moves about the stage, putting on a show in front of a larger, imaginary audience. Painting his new canvas with flair and energy, mixing his paint more ostentatiously. The show stops. He motions to remove his mask, until the front doors swing open.

A tall man in a green, human-like, mask walks in-between the seats to the stage. He extends a piece of paper to The Doctor.

He kneels on the stage to meet the tall man at his eye level, takes the paper and reads. Skimming the papers and signing it, he returns the paper.

The next day, The Doctor prepares for the next show. He grabs his newspaper and sits on the stool. On the front page there is an article advertising The Doctors’ show. As the newspaper hits the floor, half the seats in the theatre are being occupied. The theatre now with many different colors from each of the patrons’ different suits. Yellow, red, blue, and purple to name a few. The black masked man turns to begin.

Behind the canvas, on the stage, the green masked man from yesterday was sitting.

The Doctor paints with passion, never glancing back, pure focus. Line after line until the painting is finished. He spins around to see three individuals exit the theatre, the only three that showed up yesterday. Turning back to look at his painting, the canvas was decorated with yellow, red, blue, and purple. No longer black and white. This canvas was set aside, the audience still waiting for something to latch on to. The Doctor switches back to black and white paint he didn’t know was replaced and paints.

“Boo’s” echo in the theatre. Tomatoes are thrown at The Doctor and the audience leaves. His black suit is covered in red.

The green masked man shakes his head in dismay. He enters the room of paintings and locks the door behind him.

The next day, the tired artist takes his newspaper to his stool. The headline reads “The Doctor takes a new look, in this event of the ages.” The door to the painting room is open and the green masked man is nowhere to be seen.

The Doctor enters the painting room and is wrestled into a chair by two well-dressed masked men. His arms and legs strapped to the chair as the two men stand behind. Across the room, the green masked man stands with another person who is obscured by a curtain.

The curtain falls, and behind it, a man with a white plague doctor mask with a colorful suit of similar make to that of The Doctors’. The Doppelgangers’ movements resemble The Doctor’s, during his imaginary performance.

The Doctor fails to break his binds.

The Doppelganger takes the stage in front of a full audience. Painting and performing, the theatre filled with thunderous applause.

The hopeless painter watches in his chair, seeing the three patrons who left yesterday had returned wearing colorful suits. He felt a cold sensation run across his neck, followed by warmth. Looking down, his black suit now covered in red.

The white masked painter showered in confetti and praise, forgets The Doctor.

Lane Goble was born in Kentucky. He spends his time writing stories and writing for his Dungeons and Dragons campaign.