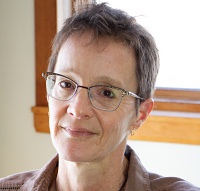 Ring the bells that still can ring

There is a crack, a crack in everything

That’s how the light gets in.

I bring the side of the pan down hard on the butcher block, shaking the loaf to its core. Force is needed or it may never leave the pan. Wait. A disclaimer. This is not a romantic story about baking bread. Nor is it a cozy tale of my family, hunkered down together during COVID. No, the year of quarantine, lock-downs, job loss, and isolation widened the cracks in the unreliable foundation of my home. I turned to dough—sticky, pliable, and a tiny bit forgiving—searching for what, I didn’t yet know.

One mittened hand catches the loaf as it slides out. Flipping it over, I lay it down gently on the cooling rack. My thumb and index finger grasp it right next to the heel, pressing. I run the risk of leaving a bruise so I try for gentle. The slight bounce gives me license to roll it into my left hand and I thump it, raising it to my ear, listening for the tell-tale echo. Done.

I rub the loaf’s warm, rounded top with a cold pat of butter, a ritual not unlike prayer. I’m not religious but oil is biblical, and the melted butter anoints the surface so it shines when cool. Sometimes, I take a knife point and slash a grain of wheat into the outermost surface of the dough just before I set it in the oven. I haven’t this time, but the loaf is still beautiful and the steam and earthy fragrance make me smile, success overriding the scent of failure that sometimes lays thick in the air of my home.

Over the years, I loosely followed The Laurel’s Kitchen Bread Book recipe for Whole Wheat Buttermilk Bread. Some of my deviations were productive and interesting—additions of eggs and oats and flax made for delicious experiments. I had plenty of setbacks and disappointments—a glass bowl holding proofing dough fell and shattered, salt forgotten, a too-hot oven dried the bread to toast.

I’ve learned to trust this recipe and always come back to this bread, conditioned with buttermilk and frozen chips of butter kneaded in at the end. My mother taught me to add vinegar to milk to make a homemade version of buttermilk. The tang moistens the bread and reminds me of my childhood home and now this one, the one I’ve made for my children.

Eleven years ago, Gill and I decided to buy a home together and move our respective two kids in with us. We assumed the “blending” would just happen— get ingredients in close proximity and a family would rise out of the fact that we loved each other.

Nothing of the sort happened.

We were clueless and the mistakes were plentiful. There were competing loyalties, differences in parenting styles, kids who acted out the stuff of adolescence and kids who withdrew. Dinners became times of torment, the tension seeping into every glance across the table, every “Can you pass me the water?” The kids began to dread when we’d call them—”I’m not hungry” or “I’m not feeling well” the expected response.

The two of us at the table, empty chairs scattered between us.

Here’s a metaphor. We wanted our two families to become one but didn’t own a vehicle large enough for all of us. So, by necessity, we split up each time we went somewhere by car, dividing along biological lines. The division became painfully evident over holidays when one car drove one way and the other went in the opposite direction. You can imagine the rest.

The early weeks of adjustment grew into months, then years. My children ate at their dad’s home more and more often. I’d hear their voices, happy banter accompanying their walk down the last block back towards our house, and I’d position myself in the silent kitchen, cleaning up, wanting to greet them with an approximation of contentment and normalcy. They disappeared quickly to their rooms. “Yeah, it was great—” in response to my at-the-ready questions about their evening.

Each one of us dreaded sitting down to eat together. Every shared meal led to tension and guardedness. We thought about giving up. All of us, traumatized by the reminders that we were not the family we had hoped to be.

Late spring 2020, I am at home with three kids—all three doing remote schooling in some form, two of the older kids unexpectedly with us. I hear on NPR that fifty percent of young adults in the US are back at home during COVID. I am convinced we will never have the house to ourselves again. Far less flexible and adaptable than my wife—a personality trait— the more tension I feel in our full house at this point in my life, the pricklier I act.

With the pandemic and the loss of my job, the days became excruciating negotiations with my mind. Almost overnight I had time to cook, take long walks, and watch “Schitt’s Creek” with my daughter. A TV episode now and then and two long walks a day were manageable. Cooking? Still not. Not with three of our four at home, the past haunting me.

I turned over meal prep to Gill and my stepson, the only kid who wanted to share in the cooking. Miraculous anyone wanted to spend more time in the kitchen, especially him. His love of meat in a semi-vegetarian household had spurred a number of heated discussions between Gill and me—he either didn’t hear us or chose not to. He had the desire to find new recipes and follow them with care. I began to notice that we gathered for his meals. The youngest, who had moved out to live with friends, came home to eat the nights his stepbrother cooked. I, too, began to eat his food, vegetarianism set aside. His meals, heavy on the reds, were delicious. The salty, garlicy broths a salve mending our disconnection and disappointment.

It’s a dreary, liquid sunshine day. It’s nine a.m. and I’m already edgy about the open floor plan of the next fourteen hours. I open the fridge door in the way that teenage boys do and stare at the contents. Without giving it much thought, I reach for the yeast that’s lived in the fridge door for the last few years.

It comes easily. Even after all these years of not wanting to cook and bake bread, I’ve got the buttermilk bread recipe memorized, my own adjustments still easily made. Push, flip, roll—the dough is moist but not too tacky. I can feel it coming alive as the minutes pass. There. Into the greased bowl and onto the counter in a bit of sunshine.

My stepson does a lap through the kitchen. I can tell he’s curious and I offer that I’ve decided to make some bread. While I’m mixing and kneading, we repeat a new pattern—a lap, a sentence: “Hey, how’s your day?” or “Shouldn’t be long till it’s in the oven,” that sort of thing. He doesn’t ask me anything about what I’m doing but he’s walking through the kitchen more often than usual.

I am nervous around him. We don’t talk much. He’s a foot taller and I feel dwarfed by his height and his characteristic silence around me. I decide to vacate the kitchen for my study and busy myself with writing, on bread no less.

After forty-five minutes, I pull the bread out of the oven and whack the pans, releasing the loaves. The kitchen is warm and smells of a home that is comforting and safe. “Smells good,” he says this time through.

“Give them a few minutes to cool, but have at it,” I say, pleased beyond measure.

A twenty-five pound bag of freshly milled whole wheat bread flour sits in my pantry, Farmer Ground Flour printed on its side. It takes me back to my first job after college graduation, arriving at the old-fashioned bakery in the still dark, early morning hours. My days began with the hefting of fifty-pound bags of Montana wheat into the mill for that day’s honey whole wheat bread and lemon poppyseed muffins.

I have an idea and google Farmer Ground Flour. Before much time has passed, I am talking with Greg Russo, one of the millers. I picture him in his mid-thirties—there’s a photo on his website—an amalgam of youth and optimism and dogged determination. His bio on the website had caught my eye. The mill was a labor of love, the process mattered. “Greg spent that first year transporting grain in his undersized truck, carrying sacks of grain up ladders, filling hoppers by hand and sleeping on pallets.”

Farmers Ground Flour is a “micro-mill.” What the largest corporations mill in a week takes Farmer Ground Flour a year. They mill six different grains—hard wheat, soft wheat, spelt, corn, rye, and einkorn. They source most of their grain at Oechsner Farms, a certified organic grain farm in Newfield, New York just a few miles south of Ithaca, where I live. Wheat is dried to a specific moisture, cleaned and stored, and is available year-round for milling. Roughly every two weeks, a truckload is delivered to the mill—Farmer Ground Flour has capacity for a month of grain storage. The millers get to know the farmers and together, they know our region and the qualities of the grains that are grown and harvested.

Milling at Farmer Ground Flour is both technical and harkens back to a time before mass production and consumption. Pink granite millstones grind wheat into the finest of flour. Three 12-inch thick millstones, each a step in the process, require precision—both in use and in upkeep. Millstones used to be sharpened with a pick—Farmer Ground Flour uses an air-powered chisel—to ensure that two stones, up to four feet in diameter, work together while separated by only 1/1000 of an inch. If the sharpening is accomplished with care and expertise, a piece of parchment paper can fit between the heavy stones, but only just.

The parallels between the micro-milling of grain at Farmer Ground Flour and the family Gill and I created by our marriage do not escape me: starting without the right tools, the importance of connection, recognizing that small things matter, keeping at it. The years of disappointment, angry outbursts, and regrets weighed heavily in my home but we stayed and allowed the years to refine us. I laid down the burden of regret, a millstone hanging from my neck.

The bread I make relies on gluten—binding and elastic, it takes shape over time and holds the bread together. Yeast expels carbon dioxide as it feeds off the honey I add and gluten keeps the gas from being lost, trapping bubbles as the dough gets stretchy. Kneading and proofing require attention and care so that the bread rises and has the texture that one expects from a well-baked loaf of bread. Over-kneading kills gluten and there’s no fix for this mistake. But gluten isn’t the only way to get bread to hold together and while sometimes crumbly, sometimes dense, those loaves can be just as good.

Like the slash of a knife’s tip, the cracks in our family revealed unexpected bonds of connection—tenacity. Dough, like families, can be forgiving but gluten or not, the process requires patience.

A loaf is on the counter and the kids are in their rooms.

I know it won’t last long.

Kris Haines-Sharp is an educator and writer living in the Finger Lakes Region of New York. She is a 2020-21 Craigardan writer-in-residence where she was selected to study with Kate Moses in the Bookgardan writing program. She has been published in Entropy Magazine. She is writing a memoir.