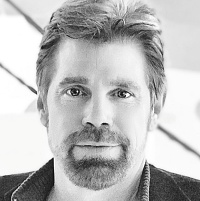 Screaming into the Well

He looked up.  A very small crowd had gathered around him.  Tourists.  Children.  People with backpacks and shopping bags were looking at him.  A few were smiling.  A few looked like they were getting ready to call the police.  A few were pointing and talking to each other.  Did someone take a picture?  What was he saying?  Yes what was he saying?  Had they heard all that?  Ooh, he felt his face on fire, and looking up he saw the wolves and the rattle snakes and the vipers all bending down from the tops of the buildings.  The sky was an open mouth.   A storm was brewing.  Had he started that?  The thoughts in his head were turning in the same direction as the spiral of clouds above.  Surely, this could be no coincidence.  He must have stirred up the heavenly gamelans and tapped into the great Macroprosopus.  There would be consequences, without a doubt.  He had better prepare himself.   What are you looking at? he said, and he spat and snarled at them.  Animal noises came from his mouth, it seemed, not the words he thought he said.  Grunts and squeaks.  He had brought that up from the depths.  He had not fully re-arrived, recombined, reconstituted, amalgamated back into his human form.  The fur on his hands stood up and he swiped at the air.  The people backed away.  What do you want from me?

We’re here for the tour, someone said.

We were told to meet here for the tour.

We’re supposed to meet in front of Doc’s and the guide would start the tour.  This is Doc’s.

Jones looked up.  The bulb lights were on, spelling out the name.  Why, it’s broad daylight, he said.  Someone laughed.

Are you here for the tour?

No! Jones said, then he took a deep breath.  What tour is this?

Oh! Jones shot right through the fuzzy roof and shook his head and cleared the clouds.  It all came back in bites.  And it was all beginning to blur as it formed.  But he knew, he remembered.  The underground city!  Yes!  No, I’m not here for that.

We thought this was part of the tour.

Funny, what you were saying.  It was funny.

This was not what Jones expected.  With both hands, he pressed against the top of his chest and pushed downward, smoothing the material of his coat.  Then he cupped his hands over his mouth and with his fingertips rubbed his closed yes, then pushed his hands back across the top of his head, smoothing out the hair and resting his hands at last at the back of his neck, turning his head from side to side.  Well, he said.  No, indeed, I’m not here for the tour, and I’m afraid the show is over for now.  This was after all simply a preamble to your journey.  Caron shall be here shortly, and your tour will be a most fantastical, historical lesson!  Invigorating.  Stimulating.  Truly, an eye-opener.  Chuckles and laugher rippled through the little crowd.

But I’m afraid, Jones said, that I must now take my leave of you, and he conjured up a smile.  He looked down and tapped the ground a few times with his toe.  This seems to be holding, he said.  A few more people laughed, and he bowed slightly, took a deep breath and went about his day.

Douglas Cole has published six collections of poetry and The White Field, winner of the American Fiction Award. His work has appeared in several anthologies as well as journals such as The Chicago Quarterly Review, Poetry International, The Galway Review, Bitter Oleander, Chiron, Louisiana Literature, Slipstream, as well Spanish translations of work (translated by Maria Del Castillo Sucerquia) in La Cabra Montes. He is a regular contributor to Mythaixs, an online journal, where in addition to his fiction and essays, his interviews with notable writers, artists and musicians such as Daniel Wallace (Big Fish), Darcy Steinke (Suicide Blond, Flash Count Diary) and Tim Reynolds (T3 and The Dave Matthews Band) have been popular contributions https://mythaxis.com/?s=douglas+Cole. He has been nominated twice for a Pushcart and Best of the Net, received the Leslie Hunt Memorial Prize in Poetry and recently won the Editors’ Choice Award in Prose from RiverSedge literary journal. He lives and teaches in Seattle, Washington. His website is https://douglastcole.com/.