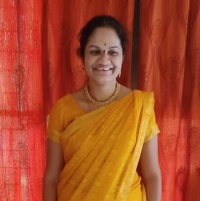 Writing on a Tree

Thick plainness as soda
Ice like migraine
Slowing down thoughts
As a relief
I find
Fingers covered in sandalwood paste.
Half of it is wiped away with water, tingling,
Listening to kajri
I think of scrubbing fingers harshness in your passionate writings on
Pomegranate skin.
yellow
For an hour, twittering
I splash water to wipe the thickness on pupils.
I open my eyes fully to read you.
Then I find the kajri is ended.

My aunt’s desperate hands to pick the leaves
to cook with meat, is cooked hundred times in her imagination’s clean kitchen,,
Wiping off garlic smell from her hands, scissors and rags, are her envelopes.
She becomes ice before the tree, in our return to the fair, where we carry the fair in our smile, she inspects for more new fresh baby leaves of that overlooked tamarind tree on the side of the road.
Her husband calls her, “get into the car”, she pays no attention, chewing the tamarind flowers alone makes her resistive, this is the time for her rough sketches of silence.
The breeze is in solidarity with her.
She picks it with innocence of
a child who builds a nest with pillows and blankets to prevent the wind from fluttering.
“Get into the car, people are watching you here, such wasting nostalgia” her husband shouts again.
She things of climbing the tree, she sees better leaves reaching the sky.
Summer’s real heat she finds in her real tiny kitchen with no electric light, not enough place for the stove,
where the conformist husband always says spices should be ground with hands.
She wraps herself with the branches. Nobody finds her voice either occupied with chewing.
She fills the polythene cover in her hand
with more and more leaves.
Then she starts filling her hands with extra leaves.
Becoming sour, we never would know what triggered her electronic self.

She is told to make this recipe
Carrying true Karnataka’s geography.
Not compromising the alliteration in the name, with the flavors.
Toughness of Carnatic ragas like bhairavi or shuddha saveri.
She speaks less these days, no colour of raisins in her entries.
All beautiful memories of reading for herself, are grounded poppy seeds.
Little drawings of scattered rice, in her notebook.
Evening’s prettiness she fixes
Saucepan in low flame she listens
The word coconut water
While thinking of the word’s origin.
She doesn’t have enough grasp on time.
She is fond of all incomplete things
As jaggery never gets a fine square shape.
Glossery:
Payasam: a sweet made with rice and jaggery
Karnataka: one of the states in India
Raga: tune in Indian classical music

Winter is the sicker version of green.
Son copies the darker version of water
As the fire of flowers.
is captured in pieces.
shared version of grass
Light is the thorny version of sand.
flitting the letters
sweet potatoes
correspond
shades of wind.
Darkness is the disfigured version of snow.
A Pseudonymous morning’s moving street
Night queen’s fragrance is the poorer version of sleep.
Monologues make dreams.
Foliage is the romantic version of paintbrushes
Poetry is a glass
with dark stains
Life in a draft
old version of time
makes memories
preserved in
discontinuity.

We have to listen to the recording With so much care
Like holding a boiling tea cup while walking.
After 1 or 2 sessions of practice,
You think, you’ve learnt the song.
You get this feeling of losing a lot of weight,
When you look at your picture in a tracksuit.
After few days, you understand that, you have to start allover again.