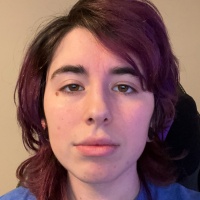 Banging on the door, I realized, was not going to free me from this situation. I was stuck in here with Tyler, the one that my girlfriends deemed “the perfect man.” I never thought that I would see his face again, let alone two feet from me in a studio apartment several cities away. The temperature of the room rose with every tap of Tyler’s foot.

“Look, I know you don’t want me here right now, but we must find a way out,” Tyler stated as if it was not obvious.

The door had become jammed by some twisted force of God and stuck me in here with the boy who played me like a fiddle. If looks could kill, this apartment would be a crime scene with Tyler at the center. Following a deep sigh, I finally spoke, “I have already tried banging on the door, if you have a better idea, be my guest.” Tyler’s brows pushed together, to the point I swear they were touching, but it was not with irritation. It was more resembling—No, he is not giving me pity right now. He would not.

“We must talk eventually Kat,” Tyler said in almost a whisper, “I never wanted to hurt you, especially after all you lost.”

The crunch of my jaw clenching rang through the unfurnished apartment. “Never meant to hurt me? What a joke!” I shouted at him; my eye twitched as I made eye contact, “I spent 5 years hoping you’d come back, hoping everyone was wrong.” I drew a shaky breath as my eyes began to water. “I needed you.”

Tyler patted the ground next to him, in my anger I did not notice he sat down. “I think it is long overdue for us to have this talk.”

Though I opted to sit adjacent, I strongly agreed the same.

“I need you to just listen at first, then you can yell all you want. Is that okay?” Tyler asked.

With a nod from me, Tyler began a very lengthy and long overdue explanation of his disappearance. I could feel the genuine pain of not being there for me when my sister passed away, but I could not stop the anger to follow when he told me why he left.

“I was never in love with you, Kat, I was in love with your sister,” Tyler said as he couldn’t meet my eyes, “Sam was who had my heart and when she passed, I used you to feel close with her before I ran like a coward.”

Though my anger was immeasurable, it dissipated quickly. I finally had closure, a reason as to why I was caused pain. The relief I experienced far outweighed my anger. I finally know that I was not the reason, Tyler was. “Thank you, for being honest,” I finally managed out, “That was what I needed after 5 years.”

Tyler sighed deeply and said, “It doesn’t excuse what I did, but I hope you can forgive and understand why I acted the way I did.”

“But nothing Tyler, you hurt me. I can understand why now but that does not mean I forgive you.”

The door began to shake, and raised voices sounded in the hall. I guess the landlord finally came to our rescue.

“Tyler, I wish you the best, but I think I need to find a new city to call home.” The moment the door was opened, I slipped through the crowd of concerned neighbors and away from Tyler Goodwell, “the one who got away.”

Jay is a young aspiring writer who attends Full Sail University as a Creative Writing student. They aspire to write stories for corporations like Tell Tale Games and create stories readers can lose themselves in.