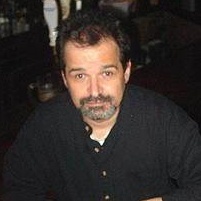 Tonight is one of those strange times Rex is almost getting used to. It’s the end of October, and he’s hiding behind the tree across the street from his house. From here can see into his living room. It’s way past midnight and the enormous lamp that fills most of the picture window is still lit, all bright and scary. The last time the enormous lamp was on this late was two years ago, the night his grandfather, Big Pop, died. When Rex’s father, Hank, got the news of Big Pop’s death, he sat himself in the chair by the enormous lamp in the picture window and smoked almost a whole pack of Lucky Strikes. Normally Hank didn’t smoke. He figured if anyone saw him smoking in the window, they’d think it was the smoke making him cry.

Hank sits in the window tonight. He isn’t smoking, though. Tonight, he’s just sitting there next to the big lamp, staring out the picture window, waiting for Rex.

Across the street, behind the tree, Rex shudders. The air is Halloween crisp, desperate and chilly. All Rex has on are his groovy hip-hugger bell bottoms and his new polyester disco shirt, the one Jimmy Lynott secretly gave him for his birthday. He has a jean jacket, but when the screaming began he ran out of Jimmy’s room, forgetting it. He could go back for it – Jimmy’s house is just up the block – but Mr. Lynott probably won’t answer the door, and Jimmy is probably already being punished.

Rex flaps his arms for warmth. He longs for his bedroom. For his robe. For a locked door. For a pillow over his head to blot out Mr. Lynott’s yelling.

A hunter in his blind, Hank spots movement across the street, behind the tree. He squints, zeroing in on the movement. A paisley polyester cuff flutters into view then disappears. Okay, here it is. Hank stands, steadies himself, walks to the front door, and emerges onto the front porch.

Rex and Hank in the kitchen face each other across the table. Rex fiddles with the little flap on the top of the Tupperware salt shaker; he likes the satisfying ‘click’ it makes when he snaps it shut. He broke the flap on the pepper shaker the day after his mother brought the pair home after Mrs. Lynott’s Tupperware party.

You know what’s going on, don’t you? says Hank.

John Lynott called here about an hour ago. Said you and Jimmy left the dance early. Did you?

Yeah. We got bored.

Said he went upstairs to check on you and Jimmy. Said he found you and Jimmy doing something on Jimmy’s bed. I don’t want to know, but what were you doing?

We were practicing for when we start dating girls.

Yeah. Practicing. This way we’ll know what to do when we start dating girls.

Hank scratches his elbow. He scratches it for almost a full minute.

Rex doesn’t move. He can smell his father across the table, a whiff of that morning’s aftershave combined with sour whiskey and the sweat of the day. He senses that he and his father will not sit like this again, just the two of them, father and son, dad and his little buddy. He misses him already. He rises, and heads out the kitchen door.

Don’t tell your mother about your practice sessions with Jimmy.

John Lynott said you and Jimmy can’t be friends no more. I agree.

And take off that damn shirt.

But this is my birthday present from – Rex stops. He knows if he says what he was going to say his father will spring from his chair and spout things he doesn’t want to hear; but Hank is already up and spouting, using his I’m-your-Father voice: Take it off. Take it off. Take. It. Off.

Rex unbuttons his shirt, slips it off, hands it to Hank. Hanks takes it, balls it up. One sleeve hangs from the balled-up shirt like the errant arm of a dead body.

Rex stomps out of the kitchen and up the stairs. Hank stands, tosses the balled-up shirt into the garbage can, then opens the junk drawer and pulls out a pack of stale Lucky Strikes. He sits and lights up. If anyone looks in the kitchen window and sees Hank smoking, they’ll think it’s the smoke making him cry.

Ted LoRusso’s plays have been produced in Manhattan (Off- and Off-Off-Broadway), Scranton, PA (Scranton Fringe Festival), and regionally (Kitchen Theater, Ithaca, NY). His plays have been published by United Stages, Third Coast, and Drama Notebook. He wrote the screen play for Cracking Up (winner of the Venice International Film Festival Critic’s Choice Award for Best Screenplay and The New York City Underground Film Festival People’s Choice Award), which will be released on Blu-Ray in 2023. He’s featured in The Right Words at the Right Time Volume 2, Your Turn, edited by Marlo Thomas, Simon & Schuster Books. His poems have been published by Pennsylvania Bards and Poets Live, and his lyrics for “Attack of the Rock People” can be heard on Norah Jones’s alternative album, El Madmo (Team Love Records). He lives in Scanton, PA.