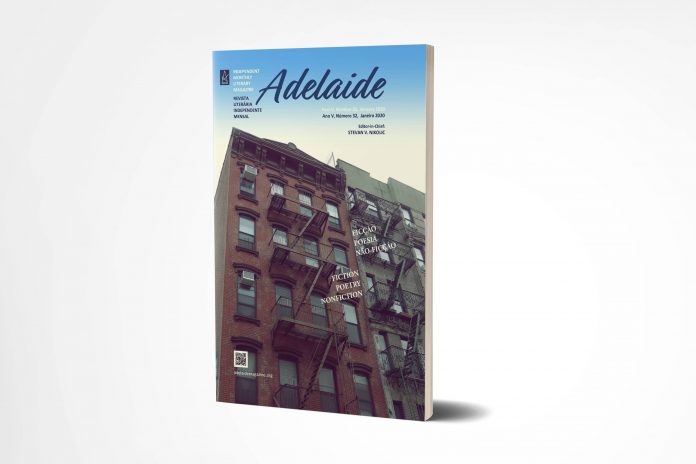 I was four years old when my grandmother announced that she was going to shoot the mynah bird. The sun had been above the ridge of the Koolau mountain range for several hours, washing us with tropical honey hues as we sat at the metal dinette outside her house on Kahala Avenue. I was just coming into self-focus in my short life, and this memory has built upon itself layers of clarity over the years, like the faintest of paint strokes, applied one atop another, until the image is sharp and bright. The enormous jacaranda tree which housed the offending bird had decorated the patio stones with feathery lavender blooms, which danced and blew lazily across the stones in the light trade winds. On this day, I was nibbling micro-bites from a toasted cinnamon Pop Tart.

Shrock! The mynah bird protested, and I covered my ears against the painful attack.

“See?” Grandmother said, “I can’t even read my paper with that racket. You!” she pointed a sun-worn finger toward the jacaranda tree. “I’m going to shoot you with jellybeans!”

My mom, who was actually there that morning, said, “Oh Mother, you don’t mean that.” My heart fell. My mom, whom I hardly saw, was disrupting the rhythm of things. I wanted my Grandmother to shoot the mynah bird, because it was something she wanted to do and this would make her happy. And if she was happy, she’d be nice to me. I needed my grandmother to be nice to me, and now, wanting to shoot the mynah bird, she wore an almost-smile on her lips, where she usually wore a frown.

“Of course I mean it,” she said. Go get your brother’s slingshot from the garage.” Referring to my Uncle Jack. Who was attending Stanford.

My mom rolled her eyes and flipped through the Honolulu Advertiser noncommittally.

I stopped chewing the edges of my Pop Tart, and some words rushed out past my fear of her, “But Grandmother. What about the jellybeans? Do we have any jelly beans?”

This is such a fond memory of that house at 4504 Kahala Avenue, an old house with a cottage out back, near the Pacific Ocean, that contains my earliest memories of Hawaii, after my mom fled my brilliant but crazy dad in Berkeley with infant me, and ran home to her mother. But pleasant memories like this one are rare at this house and the fog surrounding my memory for a long time hid the truth from me. That my grandmother resented me being there, resented my mom gallivanting around the Ala Wai yacht harbor learning to sail on her new boat purchased with an inheritance from her paternal grandmother. My grandmother resented me so much, and hated my screaming so much, she’d lock me in the cottage out back, behind the beautiful jacaranda, where I could hear the shrock of many mynahs, and sometimes I could hear the washing of sands by the pounding waves—or maybe I created the soothing sounds of waves as a highlight to this memory— but I do know that I was alone, and I was afraid. I would scream myself to sleep, earning me the reputation in the family as ‘the screamer.’

The search for jellybeans became my personal mission, as three generations of us wandered Waikiki after Mom and Grandmother had had their Mai Tais at the Halekulani pool deck, while I collected primary-colored swizzle sticks from drowsy tourists pinking up in the sun. Mom exhaling Marlboro Reds through red lips into the exhaust-fumed city air. Grandmother still, with that almost smile. In and out of stores we went, asking for jellybeans. So Grandmother could shoot the mynah bird. And I could watch. Perhaps, if this mission were accomplished, she would actually smile, then she would like me. Maybe she wouldn’t scold me so much. Maybe those evenings in her quiet house, where I wasn’t allowed to touch anything except her flea infested dog, would become more fun. Maybe I’d stop screaming and she wouldn’t lock me in the cottage when my mom wasn’t around.
No jellybeans were found along the main drag, so when Mom and Grandmother weren’t looking, I veered off down a side street to continue the search on my own.

When I was an angst-filled, insecure, stuttering teen, Grandmother came to live with us on Maui. I had a job in a restaurant kitchen and was making my own money, independence driving me to near insanity. My mom still cowered under the weight of Grandmother’s words, and did not step in to defend me when those sharp, condescending remarks sliced through the air, directly at me.

“You should wear eyebrow pencil to cover that scar from when you ran into the house.”

Or, “That friend of yours is prettier than you.”
Or, “Oh! What are you thinking? You’re not smart enough to attend Stanford!”
Or, “Get back into that kitchen right now! Go get your plate and eat your vegetables.”

Most of the time, she didn’t have to say anything for me to feel her disapproval. Under the scrutinous eyes of my grandmother, I always felt more dumb, more fat, more anxious, more stutter-y.

A four year old marching down a side street in 1964 Waikiki probably was an odd sight, even for back then. But I popped into little Japanese gift shops, spaces full of rattan and colorful plastic trinkets, proudly asking for jellybeans. I would be the one to bring jellybeans to Grandmother, and she would smile at me!

Only there were none.

I wandered out of each shop more disappointed than before. Finally, a tall white sailor approached, asking if I had lost my mother and grandmother and, if so, he knew where they were. Well no, I hadn’t lost them, I had left them to go on this important mission. But I knew I had to go back to them, so I let him lead me out of the store where, on that hot, sunny, Waikiki street-corner my mom stood teary eyed and my grandmother stood stoic.

I began to cry. There would be no jellybeans and my grandmother wouldn’t shoot the mynah bird. Of course I looked like a scared lost girl, crying like that. Mom took me into her arms and said, “It’s okay, we’re here,” one of the many times she would not understand me.

When I was nineteen, I lived in a rambling old house in a Portland, Oregon suburb, with my musician boyfriend and his band. I was working and attending community college. Stanford a long, lost dream. My mom never told my grandmother about my liberal living arrangement. One day my mom called and said my grandmother had died of throat cancer. She was sixty-three.
“Oh,” was all I could say.

Back home on Maui in my twenties, one night Mom and I were playing Cribbage, cross-legged on the carpeted floor of her small condo with the coffee table of cards between us and our respective drinks. And here is when I learned that my grandmother, now gone five years, did not die of throat cancer but of cirrhosis of the liver. This prognosis had embarrassed my grandmother and she had flirted with the doctor right before her death to get him to change the cause-of-death on the certificate.

Suddenly, visions of that frosted rock glass with shiny gold leaves which had back-dropped everything from poached egg breakfasts to breaded frozen shrimp from a box came to mind. So my grandmother had been haunted by her alcoholism, and she took it out on those who were around her—my mom and me. But still, at twenty fours years old, I felt nothing.

The memory of my grandmother lay dormant for some time. There was a burst of recollections during my late thirties when I spent time on a therapist’s couch, and I excavated from my psyche that she, Grandmother, had put me in the cottage before I began screaming, not the other way around. Her lie that she had spun into the family fabric. I reconciled her affect on my young life and have spent a lifetime proving that I have worth. Am I proving her wrong? Did her put-downs form me into the driven person that I am? Am I successful because of her?

I am not sure. What I am sure of is that she was a driven and intelligent woman in a time of male dominance. She was a schoolteacher, as her mother had been, at a prestigious private school. (Punahou, where Barak Obama attended, and where I got asked to leave after Kindergarten for misbehavior—which embarrassed her amongst her teacher friends, and which she would constantly point out as one of my many failures.) She was unsuccessful at relationships, and failed three marriages, as did my mother. (I failed only two.) She was a neat freak, my mother was a slob, I am a neat freak, though I try not to be too extreme like she was. But I do like to make my bed like she taught me—hospital corners, and snug enough for a dime to bounce off the spread— and I abhor terrible table manners, like she taught me. And I’m pretty particular about unruly children, as she was. I always wash my hands after using the rest room and, looking in the mirror, I can still see her look of disapproval shot toward a lady in a restroom in Honolulu, who headed to the door, her hands still marred by her own germs.

In my fifties now, sometimes I reflect on ‘my inner Grandmother.’ That disapproving narration in my head about all things improper, or gauche. When my husband wipes his food fingers on his jeans I cringe and hand him a napkin. “Oh my Lord,” says inner Grandmother. When he eats like someone’s going to take the food away, I tell him to slow down. “Oh for heaven’s sake,” she echoes.

Something hit me the other day, thinking of her which, for some reason I do often now. She died at sixty three, when I was nineteen. Which means that when I was nine, and she’d take my best friend Jackie and me to Mokapuu Beach, and we’d play in the tide pools with that flea and tick-infested little dog Mele (is this why I don’t like dogs?) and she’d slip down the straps of her big black one-piece to sun her broad shoulders, and her purple wormy varicose veins in her legs were exposed to the world, she was fifty three. Oh, my God, I thought, I’m her age now. But I still wear a bikini. I do not have varicose veins. I will never have a dog in my house. I am happily married.

But I do fill in my eyebrow scar with pencil. I’ll give her that. And when the squirrels start pillaging the bird seed in our feeder hanging on the big oak tree in our front yard, I think: If only I had a slingshot, and some jellybeans.

Marisa Mangani is a former chef, and now designs commercial kitchens and bars. In her free time, she is the Sarasota host of Tampa Bay’s Wordier than Thou, an open mic storytelling forum. Her essays and fiction have been published in Hippocampus, Skirt!, Aji, Borrowed Solace, South 85 Journal, Sleet Magazine, Punchnels, Sandhill Review and Entropy Magazine. Her work has been nominated for a Pushcart Prize and Sundress Best of the Net Anthology.