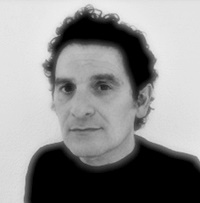 A heavy rain falling over Lithium Island,
the roads flooded with tears of the disenfranchised,
the quarry a lake of grief and woes,
the tavern’s cellar under thirteen inches
of something that once resembled water.

All of us are huddled round a match in the dark.
We take turns telling someone else’s story.
I’m the president, for instance, of a failed corporation.
The windows of my heart have been boarded over.
My mind is a shadowy corner in cobwebs and dust.
My soul is a fly et cetera, as there’s little sense in going on,
the rain continuing to fall, the deluge far from over,
the creatures of the deep come to walk upon land.

Down on the farm, resentful chickens
calculating the price of revelation.
Horses in the pasture, awaiting their cue.
The hogs drunk on the wine of introspection.
There’s also a busted pump,
notable for its bad water.
A tractor on its side, once red, now rusted.
Just there, by the twisted apple tree.
With, also, a few phantom sheep
scattered about randomly
to add a sense of perspective.
The ramshackle barn’s fallen over
but the farmhouse still stands.
In its kitchen is a table with an axe on it.
And a blue pitcher.

Dear Whomever, not that we care that much,
but we seem to have misplaced your recent order.
Somehow the forms were sent to deepest Africa,
your details now in the hands of the Russian mob.
However, for an extra fee we will provide poor service.

The inner life of the rat-catcher.
Who studies the classics.
Who takes courses in the evening,
continually soul-searching, always thoughtful.

And his comely missus, humming
in the kitchen, sunlight washing
clothes on the line, the radio playing
songs we’ve all laughed and cried to.

And something else, skittering
under the floorboards,
moving with willful intent,
disregarding austerity and riches.

About the Author:
Bruce McRae, a Canadian musician currently residing on Salt Spring Island BC, is a Pushcart nominee with over a thousand poems published internationally in magazines such as Poetry, Rattle and the North American Review. His books are ‘The So-Called Sonnets (Silenced Press), ‘An Unbecoming Fit Of Frenzy’ (Cawing Crow Press) and ‘Like As If” (Pskis Porch), all available via Amazon.