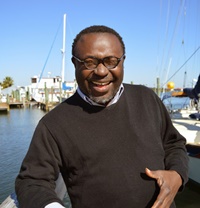 It is the seventh month, and the
Uvene fruits are ripe again  –
The wild berries, plump with juice;
The breadfruit, and the gourds are full, heavy
Like the pregnant women of this land
About to give, to the galleries of life,
The sumptuous yield of this year.

It is harvest: the yams, long and stiff,
Like God’s mighty penis we pull out of the earth,
And wash them clean, and array them
Like ceremonial things, in the racks
And observe –
What great sights these are
As we make a high fire for the offering

Once more to this land: here was our shield
In the hundred years after the flood. We were
Wanderers – from Kamalu’s war – and his lurch
Into divine madness. Hear then as it was: as –
The door of the sun opened, we descended,
Fragments of light, and became Igbo, and found
The land fair, from the rise of the sun to its setting.

There is, in the grim dark places of our history,
Some light – of love between the daughters of
Earth, and the sons of light, who first found them
Bathing at the waters in their first descent at Igweocha –
And, struck by the dark supple sheen of skin made
Holy and firm, and sculpted in time, in the forges of
The deepest night, were taken in the fold of their embraces.

They fused again and again and lay, fruitful fields,
The vines that cling and rise to the sun in the ecstatic
Heat, and the revelation thereafter, that out of the bloom
Of the first wild roses, we see the face of God, and us, divine,
Shivering in the sheer grip of mind-wracking pleasure out
Of which comes, our intimations, the familiar arc in the lift of
Our faces, where God had left a mark.

We are his children –
Who, one afternoon in drunken play
Stirred the world into being. We too are
Drunk, and often stir, and rage after
The first days of the moon and then we make
Anthills from the many burnt offerings we make
At the rise of every sun, to the earth as she unfurls.

A mound of five pillars – each for Agbaja –
Oru, Isu, Nri, and Idu: the five pilgrims to
Whom we bring the herd, and to them, a long
Dark temple, one to the Sun: Igwe – and one
To the earth: Ala – Father and mother of
Things: of Oha – their father – courtly
Agnate; first priest of the Sun-god.

In the five temples of the gods, an old
Mystery was born: beneath these temples
A double flight of stairs, to the gates of the
Immortal pathways – Ogwuwgu- where
The beautiful Idemili, guardian of the depths
And of the sacred pillars sits crosslegged
In solitary meditation, waiting for her love.

On a Visit to Ovid in Tomis

My man Ovidus, scorned by “decent society”
And banished for a kiss –
Sat glumly at the whetstones sharpening
His dagger, and his wit,
In the garden of his sad cottage
In Tomis, by the Black Sea.

I came to visit from the twenty-first century.
I came looking for the lost Tragedy of Medea.
The sharpening hung, mid-air, and grown,
The secret ears that hear the marl of windmills –
And the synod of herons, scattering,
Over the darkling horizon.

Ovid rose, straightened –
His eyes bright still as history,
Amused –
“The twenty-first century is a long way to travel –”
But all journeys are history, and I cannot return to the
Road, or its winter traffic, trampling down the road to Carthage.

I have read about the Roman Legion
Marching from the chills of winter
To dig-in in the African provinces
Where time ultimately forgot them.
And I too am an exile from Africa –
Trying to make sense of America.

He brought a bowl of berries and nuts,
And we sat with new wine, just recently pressed,
In the passageway of the cottage,
And watched the metamorphosis of the wintry light –
Two exiles, and a relic –
From the backlash of powers.

“Rome was sick” said Ovid, “as is America today.”
Our hammocks swung hither and thither. In New York,
Liberty’s head is bowed now
From the hanging chads of a ballot.
The republic splintered where her monuments
Stood, moaning from immortal lips.

A black singer sat at her feet singing elegies:
“Black lives matter –”
And indeed they do, Ovid says, but
Pay heed of the ghosts we always refuse to let
Stay buried. Mosaics of history locked in the moiling shelves
Of the Library of Congress.

She was Seventeen and symbolic, diamond eyes
Aflame, a bold incandescent blue, a music
To it, and dark-ringed from too much wine
And hashish – and no more a child –
She calls: “hey you! Bongo man –
Rasta! Buy me a drink!”

New York has stirred my loins. It is June:
The clustered offering of the demon-city of
Screaming trees, naked legs, blood-stained aprons
And hands that skin the beast of time and shape leather
Into divine ornaments for outlets that dress angels and
Advertise Beyonce for Nordstrom looking ageless

And pouting radical hyper-visibility and pixie-dust
Intimacies upon which we have founded the twenty-first
Century’s school of philosophy. Even God seemed nauseous
And ragged on the stained glasses of St. Patrick’s the goth, and
I she took, my hands freed of its own will, through a secret alley.
‘Nothing is yours’ she says. Just this temporary shell, beautiful

Beyond reason. A green Tafetta skirt covered the hippy waists,
Warm and naked with nothing else in-between as we sat to a
Shepherd’s pie. And a pot of vintage – dark Irish by its looks, and she
A little mix of Alamanni, some Aquitani, Goidelic, and a sprinkle of the
Vermont Abenaki, for tart, and the taste of the wildberry. And I am
African, by all means necessary; just out from reading poetry

At the Nigerian consulate, in honor of the poet of Labyrinths. I have
Cast my eyes to the diviners plate many a time and found me fishing
For desperate words to sound deep and enigmatic: “look man! I do not
Read poems. Three things I like: to sing, to drink, and to sex.” She was far
From home in an old farm in Vermont, and from many years of caressing udder,
And giving bulls a hand job.” I like dark, chocolate too.”

It was her time, she said – not her period – away from holding far too many
In the Quaker light of her home with Friends going all the way down to the
Founders of the Meeting School, Rindge, and Sidwell, where roosters no longer
Crow. “I shall play for my broth and a little company.” I fear the tyranny of time.
And the bulge of the sky, and a trio of dancers in the slo-mo sequence on the loud screens
Of the cat, Rihanna, stretching her limbs, and an arched hip, and the wounded sultry look.

“Do you like her?” she asks, “hear, she gives a good blow.” I do not do well
With stars. I hide in the constellations. So, no, I do not do Barbadian mulberry
Wine; I like the girl who sold clothes on the streets in Bridgetown. I like wine
From Burgundy, and of the rarest grapes from the pearled hands of the Mbekweni wineland;
And I like a little tea of the Mambilla, after an innings of cricket: I am bourgeois and
A little pretentious; and I am a bit behind the rocks; but she could sense my tide rising.

A map is a mystery. Like the knotted ropehead of the secret brotherhood – the Okonko –
She was sworn to illumination. Wine made her silent and edgy. The edge of her
Hunger groped hard for a pathway, and it was now, New-York-dark: a scarlet hue hung
To the streets, and something old, and dangerous, and oddly comforting about being alone
and

Invisible in a great humbug of a place, where every star comes to in bended knees. And my   knees to her stoop, plunging in the dark, I smell the strong herbal odor of her hair.

I too was homeless for that night, and slept on the street in New York, in her sleeping bag.
“You better go, or I become addict and poison your future.” Your body is too sweet for me. I
Have culled like old milk now. But it is not her I think about. I think about the stars shaking
Their booty permanently in the neon-lights.  Or taking endless selfies in vintage Yves St Laurent Or to capture the fleeting Sonya Sombreuil moment, or speaking slowly about being short-Vaginaed

Obi Nwakanma, described as “one of contemporary Africa’s most exciting poets” teaches Creative Writing and Literature of the Black Diaspora in the English Department of the University of Central Florida, Orlando, where he currently lives. He has been awarded the prestigious ANA/CADBURY prize for his poetry and the Walter J. Ong Award for distinguished achievement. Nwakanma has been a professional journalist, and has written widely on contemporary culture, politics, and society. He writes a weekly column, the “Orbit” for the Vanguard, Lagos, one of Nigeria’s major national newspapers. He is currently working on a new cycle of poems around the subject of Hermes for his new collection of poems.