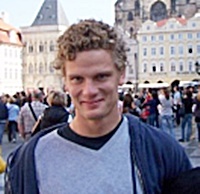 THE DELUGE
By Gracjan Kraszewski

“We’d like to extend a special welcome to any viewers joining us following that wild conclusion to the Atlanta-Carolina game. What a finish, huh, Bob?”

“That’s right, Schenectady. Wild, more like hogwild if you ask me.”

Schenectady Tourismmadeeasy nods and laughs. “A hogwild finish indeed, Bob. Remember, folks, when you need that one of a kind glossy sheen for your outdoor deck, Hogwildfinish.com is the place for you. Hogwildfinish.com, the official deck stain depot of the NFL.”

“Looks like we got a good one brewin’ here, too” Bob says.

“No doubt about it. And when you find yourself in need of a good brew don’t forget to check out Sudsy Gordos, the official beverage retailer of the NFL. Sudsy Gordos,brought to you by the Anheuser-Busch Coors Miller Pabst Yuengling Imitation Chimay Cooperative. So,” Schenectady says before pausing to catch his breath and exhale, “fourth quarter and it’s a close one. The visiting Kraft Packers of Green Bay lead the Winnie the Pooh Remade Cartoon Classic Bears of Chicago 17-13. The WPs have the ball on the Kraft twenty-six yard line; two timeouts left and just about to come out of the two-minute warning. Speaking of warnings, folks, don’t wait until Black Friday to get all of your holiday shopping done. Get the Yuletide Automatic Pocket Siren today. Set your timer and forget about it; the YAPS will activate exactly thirty-six hours before Black Friday giving you that friendly reminder that it’s time to beat the holiday rush. ‘Let the YAPS zap you when it’s time for shopping, you focus on couch-plopping;’ The Yuletide Automatic Pocket Siren, official sponsor of the two-minute warning.”

“Here we go,” Bob says, giddily rubbing his hands together as the teams retake the field. “This is shaping up to be one heck’of’a hogwild finish if you ask me.”

“Absolutely,” Schenectady says. “Winnie the Pooh U.S. Department of the Treasury Quarterback Milt Peralta hasn’t been his usual self. The two time NFL MVP, brought to you by AVP ‘your local Scranton portal to the great beyond,’ has completed less than half of his passes today and thrown two interceptions. But, if there’s one thing we’ve learned about Peralta it’s that he responds well to adversity and preforms best under pressure. Just like the new and improved gold-plated Duplex DoubleYummy Pressure Cooker, the off-…and Johnson is tackled at the Kraft nineteen yard line.”

“Peralta made a really good decision there,” Bob says. “He recognized that Kraft was playing Tampa 2—brought to you by the Tampa 2 Buccaneers of Tampa Bay—and made the proper check-down to Johnson. Now it’s second and three and they’ve got the whole playbook to work with.”

“With that last completion the Winnie the Poohs are into the redzone for just the second time today. The redzone, brought to you by Redzone Canine Pacification Services. ‘When your pooch goes into the redzone, it’s time to punt; bark us at 1-800-pscyhosaliva.’ Peralta’s pass falls incomplete. He was looking for Willard on a fade to the back of the end zone. Looks like the Extra Crispy Bacon Company football just got away from him there.”

“That’s exactly it,” Bob says. “Peralta has an absolutely fantastic Arm & Hammer arm but sometimes he forgets about touch. Plus, the conditions here at G.I. Joe field have been typically difficult with the occasional driving gust of wind making throwing and kicking a complete crapshoot.”

Schenectady looks at his partner. He is silent. He just keeps staring at Bob. After a brief pause, Bob remembers; he throws his head back and nods. “The wind, brought to you by Febreze Air Effects, official meteorological sponsor of the National Football League and the half of the CFL.”

While Bob is speaking the WPs pick up eleven yards on a halfback draw. First and goal at the Kraft eight yard line. Chicago takes its second timeout.

“You know,” Schenectady says. “Peralta’s Arm & Hammer arm is fantastic, like you said, but I’d like to see him utilize his legs a bit more; especially down here so close to the goal line.”

“Both.” Schenectady says. “His left leg, sponsored by Kick in the Pants Homeschooling Services for Delinquient Children, and that right leg, too, brought to you by Right as Rain Hydraulic Rental Cisterns. If he ever finds a way to combine the talents of those two legs, well, the league better watch out.”

“I’m just thinking that this game is really looking like it’s going to come down to a hogwild finish,” Bob says.

“Shotgun snap, Perlata rolls to his right, he looks, he keeps rolling, throws it out of the back of the end zone. Second down….Bob, I have breaking news. I just received a notice from my agent that the city of Schenectady has sold my naming rights to Jonathan Porto Portable Waste Disposal Management Services. Partner,” he says with a chuckle, “you can call me Johnny Porto! Effective immediately.”

Bob laughs. “You know, come ta’think of it, I think that name suits you best. Well, I’ll be. Not since you were that Adam’s apple abrasions cream spokesman, Redneck Cackalacka, have I heard a name that suits you so well. Congratulations.”

Two yard gain up the middle by the WP running back. Third and goal at the six.

“Well, thanks, Bob,” Johnny says. “In other exciting news, folks, it just so happens to be a third and goal with less than two minutes left in the game. You know what that means!”

The game stops and the TV cameras cut from the field. Everyone focuses on the booth; even the players look up. Bob, his hands tied behind his back, sticks his face into a large, canary yellow washing bin filled to the brim with root beer. He is hunting three Red Delicious specimens that have been plopped in, causing some soda to lap out over the sides and pool in a foamy puddle around the base of his microphone.

There is a special scoreboard in every NFL stadium for this moment. A timer counts down from one minute. If the man formerly known as Derek Smith can retrieve all three apples from the liquid every fan physically in attendance at an NFL game that week receives a packet of coupons to the Great Oregon-Yakima Apple Company. The GOYAC is America’s number one distributor of produce—not simply pommes but also pommes de terre, and much more—and pays Smith, a two-time All-American linebacker in college before becoming a five time Pro Bowler in the league and now America’s favorite color commentator, more than $20m/annum for his name change and involvement in the “Fourth Quarter Apple Hunt” which GOYAC claims has led to a 23% increase in overall sales since the game-within-the-game’s inception four years ago.

Bob Babobbingham pulls out apple #3 with 0:04 left on the clock. The crowd roars. They rise to their feet. Johnny unties Bob’s hands. Bob stands and waves to the cheering crowd.

The game resumes shortly thereafter. On third down the WPs run a trick play, a halfback toss right that is really a halfback pass. The running back sells it well but no one is open. He pump fakes, stumbles, then tucks and runs down the sideline before getting blown up by the free safety at the five yard line. He careems trough the air and crashes hard into a camera man who pays the price for inching ever closer to the field for that photo-of-the-year potential shot. The WPs take their final timeout in advance of the fourth down try.

“Now that’s a good hit,” Bob says. “You know, Schen-, Johnny, I just keep watching this game and I’ve got to say. Brother, we’re in for a hogwild finish.”

“It’s really come down to the wire, folks,” Johnny says. “Fourth down, four point Kraft lead. The Winnie the Poohs have got to try to get all the Queen Bee Golden Organic Honey here. Field goal won’t help. Need help with your homework, kids? Check out Onlineteacherbuddy.com, official educational sponsor of the NFL.Eleven seconds left in the game. Let’s see what they’re going to do. And when you really want to see what anyone’s going to do run on over to Clear Vision Warehouse, the official eye care sponsor of the NFL. They break the huddle. Peralta is in the shotgun, sponsored by the Beretta Firearms Catalog, flanked by two running backs. Willard is split out wide left. Speaking of left, too much turkey leftover? Why don’t you-…Peralta changing the play; puts Dennison in motion and out into the slot, the NFL slot brought to you by Vegas Slots for Tots. Ten seconds on the playclock. Speaking of clocks, how about an antique mod-…Peralta changing the play again. Five, four, here we go… Peralta looks left, he shuffles to his left, here comes Smith on the cornerback blitz! Peralta gets away! Smith just whiffed on the sack! Perlata still moving to his left, he looks, he looks…”

The game clock reads 0:00. As such, hundreds of fireworks—brought to you by Sixty-yard Heave into the End Zone Fireworks, “when it’s time to chuck, light it up and duck,” official pyrotechnic of the NFL—are going off above the stadium as the usually green AstroPlay undergoes metamorphosis into flashing hot pink while the stadium speakers blare DJ Frankie Scot-Kizzle’s chart topping remix of the Star Spangled Banner, all as Peralta finally sets his feet and lightly flicks the bacon ball over a leaping defender’s outstretched hands as another crashes hard into his thighs, knocking him down.
The pass is intended for Willard, who is blanketed by two defenders, all three of them heading for the back pylon, tracking the floating pass—neither a tight spiral nor a duck—against a resplendent although bothersome fireworks show above an equally distracting spastic pink field at their feet. The three leap simultaneously as now the ball appears within reach. Out of the corner of his eye, Willard sees something else. Just for a split-second, but that is enough. The WPs are on the cutting edge of postgame entertainment; for two seasons now, after every home game, they flood G.I. Joe field and recreate famous naval battles from history. The Battle of Naxos is scheduled for today. But after the game! It’s supposed to be after the game!!

Willard takes his eye off the bacon for that crucial moment, his eye drawn across the field to the far endzone, far across the field, where someone (or is it perhaps just a malfunction?) has jumped the gun. The fireworks keep popping, the music keeps thumping and the azure water crashes out from the tunnel with terrifying speed. The football falls softly to the ground, untouched.

Gracjan Kraszewski’s fiction has appeared in Eclectica Magazine, Wilderness House Literary Review, The Dead Mule School of Southern Literature, PILGRIM, The Southern Distinctive, Five on the Fifth, and on The Short Humour Site. Author of an absurdist-existentialist novel, Job Search, set in a American future 100  years from now, treating questions of free will, cultural value, and the pursuit of happiness (currently in circulation). Holder of a PhD in history. Played baseball in college, professionally in Europe, and for the Polish National Team.