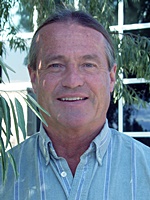 THE LION
By Lowell Jaeger

While huffing my way up switchbacks
of a treeless rocky trail, I’ve sensed
the presence of something watching.
I’ve stopped, held still in the empty terrain,
looked up and down and around and saw

nothing.  And mocked myself, the spinal
electricity of my imaginary fears.
Laughed aloud and whistled my way
onward, reasoning my good vision
would clarify all there is to reveal.

But I’ve been uncertain of my sight
since, some years back, my wife and I
visited a zoo.  Stood in front of
the mountain lion’s den.  Pressed our faces
between the bars.  And waited for the lion.

The lion who wasn’t there.  Who wasn’t there
until he twitched his long tail as if
to wake us.  As if he’d been a rock till now,
staring right at us with the plainness
of a rock’s eye, seeing all we see and more.

An octopus
— almost entirely squishy soft tissue —
can squeeze into impossibly small spaces,
a factoid offered by the marine biologist
as an almost plausible explanation
how the coastal aquarium’s favorite attraction
had slipped the bonds of its keepers.

Must have discovered how to nudge the lid
of its glass confinement
enough to probe one tentacle
for a determined toehold in open air.

Must have hid like a rumpled dishrag
in a dark corner
outside the night custodian’s view.

Must have heard the ocean
in the drain pipe
and slithered through.

A story worth telling, says the marine biologist.
Funny, how people are so convincingly disappointed
the aquarium’s only giant octopus
has gone AWOL, he says.

Even more curious, is how this story
makes even grumpy people smile, something
in us cheering a desperate primitive instinct
doing as it must
to find its way home.

One summer, God knows why, squirrels
multiplied to plague us.  Squirrels darting like rats
into and out of the woodpile — impossible
to calculate an accurate census since they all look
pretty much the same.  An army of squirrels commandeering
the crawlspace beneath our rooms.  We heard them

chewing and chittering in the floor joists while we paused
on the sofa with our dinner trays downstairs, watching TV.
Squirrels gnawing and loosening pinecones, dropping them
— heavy as hardballs — crashing and banging on the barn’s tin roof
earlier even than the robins burst forth early dawn
with their simpleminded songs of praise and wonder.  Whole afternoons

we surveilled a squirrel team of demolition experts escaping
to their bunkers in the brambles beyond our lawn,
their jowls stuffed with cotton candy-colored
muffs of fiberglass insulation they’d salvaged
from inside our bedroom walls.  Bad-ass squirrels

who commenced with alarming boldness to chide us
if we dare walk too near their frenzied burglaries. Resentful squirrels
who’d scold us for not signing over the deed and simply surrendering
our digs to accommodate their rapidly expanding appetites.
Our dog and cats mewling plaintively, impounded,
lunging at porch screens as squirrels preened and teased them.

Truly, these were a breed of cocksure squirrels, so at home
with their providence they began to parade in the roses
with the pageantry of Caesar’s empire.  As if
there were no stopping them.  As if
they’d forgotten the hardships of generations previous
and less fortunate.

As if they could ignore the shadows of hawks and ospreys
patrolling the open meadow.  And, not long before
October’s first cruel frost, the entire tribe
had vanished.  As if it were perfectly natural.
As if, in some strange logic, it all transpired to proffer us
something to witness, something to think about.

Oh, Popeye, how could it be easy to overlook
your sad estate so many years?
Your slapped-together scrapwood
shack, everyday diet of table waste,
unless we forgot, water bowl
with water in it or sometimes not.

We’d pack off to school with you
barking after us from down the block.
And howling to greet us late afternoons
as we skipped up the walk,
glanced your way and sailed on past.

The stink!  The flies!  You lunged
the radius of your rusted chain
when we knocked a foul ball nearby
and argued who should hold his nose
and go fetch it.  Where swarms of gnats
breathed vapors of piss and piles of poo.

Never let us forget your face that day
you collapsed on useless legs and lay
smiling up at us.  Nothing we can do
but let him die, Dad shook his head.
It’s worms, he said.  And raised his shovel up
to mercifully bash your head.

of dried silver spittle
glistens on a rock pathway
climbing the hillside
behind my house.

I’ve lunged forward
and sweat my chores
up and down that pathway
with armloads of whatever
projects compelled me.

But the snail spoor
moves in slow circles.
As if he’s lost his compass.
Headed nowhere.

He belly-slides in the dark.
Everything delicious.
Each pebble.  Every green blade.
Worth going over.

Wherever he’s to be
is not far off.  He’s certain of that.
And confident
he’ll discover
whatever he finds.

As founding editor of Many Voices Press, Lowell Jaeger compiled New Poets of the American West, an anthology of poets from 11 Western states.  His seventh collection of poems, Or Maybe I Drift Off Alone, was published by Shabda Press in 2016.  He is the recipient of fellowships from the National Endowment for the Arts and the Montana Arts Council and winner of the Grolier Poetry Peace Prize. Most recently Jaeger was awarded the Montana Governor’s Humanities Award for his work in promoting thoughtful civic discourse.