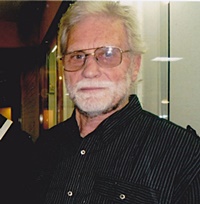 Overheard in the early stages of these beige days,
my last challenge, trekking the desert
far from a ruinous prime when oases always shimmered,
two women walking laps refer to a dog named Smooth
reminding me of our cat dubbed thus as a kitten
for his velvet pelt that shone, catching the sun,
later regarded by our gang as an operator
who (yes, I know he’s an animal, but so like us)
tried to open doors with paws, who emailed
from adoptive carers, kind former neighbours
tolerant of his overacting in videos sent
when my time came to exit paradise for east of small,
dismantled to a room where I hear my slow breathing.
A theme plied in art, this sudden arrival shocks.

Reassured by Smooth’s new quarters, I reply,
Furry nice, if not downright purrfect: playing along
with fond recall trusting his head won’t swell,
prevent him squeezing through confined spaces
to our old trails, their spoors to my heart.

On the canal path from town, a usual threshold of loss,
adventures morphed into dreams, I see a terrier,
distant, skittering my way where I sometimes sit,
solitary, on a bench watching cyclists, joggers.
I expect its owner carrying a leash but I’m alone
with what I now see as a rabbit approaching fast,
not a terrier, more terror-stricken, like me
by the notion of appalling decline.

This happens in seconds before I realise it’s a hare,
fugitive over gravel, not on the verge, so I stop
before it veers to the softer grass, slows down,
adjacent, eyeballing me as though I’m the one lost,
endangered, heading in the wrong direction
recalling a Cambridgeshire field, wind in my jacket,
flints and hares abundant, time’s triumph distant,
thinking now of Auden’s years running like rabbits.

Alpine Austria, WW2 exhausted by carnage
almost over, Europe a dangerous smouldering ruin,
two of them hold lamps aloft, squeeze through a gap
in dynamited rubble blocking an old salt mine adit
where, in a chamber, on cardboard, musty air cool,
lies The Adoration of the Mystic Lamb by Van Eyck.
On her panel, the Virgin, radiant in rich purple,
reads a book waiting for her rescue from vulgarians.
In the lamplight her crown of flowers flickers.
They search deeper, discover the Madonna of Bruges,
once commandeered by another upstart, Napoleon,
needing only a soft cloth to be revealed again,
also, several Vermeers, scenes of calm moments,
some of millions of works salvaged from Nazi looters.
Art restorers, professors, wearing army uniforms,
track that artist manqué Hitler’s greedy grabs,
true war heroes, some killed, glorious intelligence
knowing right should triumph over wrong,
like those who create our masterpieces.

We all know the scene from clichéd dramas.
Returning emigrants, time-short, kiss the ground,
penitents, the place left become sanctified,
a disproportionate rite of guileless hearts
bruised by vicissitude, by abeyance.

The aircraft sways above winter waves.
I peer down at a lone tufted rock,
sea-swirled, caressed in isolation, stranded
unchanged while centuries of lives pass.
My old heart strains, islands on the horizon.

Skirting dun pools on this bereft expanse of beach,
distant voices stilled, I muse for nanoseconds
over dampening my knees in homage.
The rain batters across, scumbling our bay,
a cold wind blasting my heart’s caverns.

The sun a blessing when I ran, touched
the far sandstone rock-shelf’s faded graffiti
then back to laughter in the ruined long ago,
shines in memory, or habit, or love,
as I scuttle to my rough-hewn encampment.