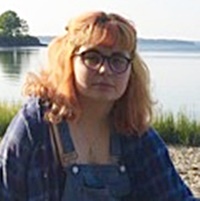 THE HOWL OF AN AMERICAN PSYCHO: An Introspection into the Destructive America
by Vanya Suchan

To raise the notion that the human being reaches for the glamorized “American dream”, but remains crushed in her struggle and trapped in a capitalist worldview, we might first examine the works of Ginsberg’s beatnick call for the affirmation of life as it appears in his poem, Howl. In his notions, Ginsberg explores the destitution of America and the “best minds of [his] generation [have been] destroyed by madness”(1),“demanding instantaneous lobotom[ies]…”(69). Ginsberg preaches of the all-too American endeavor to meet the demands of the melee of fighting for success in a stratified, capitalist society. Here, Ginsberg expounds on the human being’s struggle to exist  in fighting for the realization of the “American dream”. This incommensurability that lies at the heart of such platitudes destroys the momentum of her becoming who she is and what she initially grasps for in the first place: the forgotten American Dream of life, liberty, and the pursuit of happiness. Ginsberg continually questions the stability of America, inquiring into the nature of the “American dream”. The very ideal of the “American dream” commercializes what the human being strives for is that which drives the crushing of her sanity. On my reading and as it appears in the text, the human being ventures for what her true American dream remains as, something destroyed in the process of her enlightenment to reveal the source of true happiness. Here, I would like to bring these thought paths of Allen Ginsberg into dialogue with Bret Easton Ellis’ “American Psycho” as a way of opening up a hermeneutic understanding of Howl. The cinematic adaptation, written by Mary Harron and Guinevere Turner, depicts the mental destruction and the clinging to escapism from what exists as the human being’s reality after the confected and dangerously romantic  “American dream” comes to fruition. On my reading, the erosion of the human being’s spirit, and in turn assimilation into an unnatural, capital and freedom driven existence, ensues in both Ginsberg and Ellis’ works.  In this way, the polarizing and materialistic idea of freedom, grounded throughout the nation, eradicates that for which Allen Ginsberg fights and stands. As such, the residue of the human being left behind remains her madness, which I insist on understanding as corresponding with that of  Ellis’ depiction of the cliché realization of the American dream in the film American Psycho:an exaggerated extreme of the American ideal as the creation of freedom fostered in  heinous acts of murder.

In exploring there heinous acts of murder motivated by the American dream ideals, the film adaptation of American Psycho follows an elite businessman, Patrick Bateman. As demonstrated in the film, he exists hindered by the binding role as a successful man in a consumer driven society. He prides himself on his wealth, status through his possessions, and physical appearance. Housed in the “American Gardens building on West 81st Street on the 11th floor” his social prestige, although impressive, still leaves him struggling to meet the standards of the social strata of his colleagues. Bateman, routinely mistaken for other men, described as the “boy next door” and “ …a dork…[s]uch a boring, spineless lightweight”, struggles with his own masculinity and the fragility of his status. Living wholly obsessed with his self-image and ability to “fit in”, he endures a “balanced diet, [and] a rigorous exercise routine” and yet lacks a sense of control. He lives the “American dream”, but fails to find pleasures in his routine life, fiancé and luxurious lifestyle. Fabricating an escape from his detrimental regimen of the nine-to-five finds itself in the gruesome killing of his co-workers, prostitutes, and those who impede his success, a pastime that exclusively exists as his only true coping mechanism. Bateman exists in a detached state with his “self” similar to the Ginsbergian human being. Both variations of this human being exist in the distorted idea of the American dream, forced to carry out the life and ideals of an abstracted vision in which from they wish to diverge. In her attempt to survive, she requisitely “fad[es] out in vast sordid movies…picks [herself] up out of basements…stumbl[ing] to unemployment offices” (43). The identity in the private discourse of her and the idea of herself she portrays to the public both are rooted in and juxtaposed to one another. In this way, she remains in a disconnected state with herself, obligated to juggle between the side in which she will present to the public and the side she discloses to herself. Much like the human being, Bateman exists in as Heidegger deems the human being as das unheimlich, the unhomely way in which she dwells estranged to herself, trapped in mediating between a capitalist America and her authentic attunement toward being

Bateman, existing in what I call an unhomely comportedness, lies collocated to his, if not sterile, dwindling passion of his pneuma, the vital spirit of his being. As illustrated in film, through the character of Bateman, the human being loses herself in her endeavor for commercial happiness. The core of her being lies deprived of the forgotten American dream, becoming an idea, a routine, as she lives “hug[ing] and kiss[ing] America under [her] bed sheets” (127) “while it coughs all night and won’t let [her] sleep”, the same America that Ginsberg laments. (128) Ginsberg’s verdict on the sickliness of America we see epitomized in the character Bateman as he broods on his actuality that “there is an idea of Patrick Bateman, some kind of abstraction, but there is no real [him]”. Bateman flees towards an escape from the tortures of his dying core to an existence of control through animalistic behaviour. The indulgent pleasures of sex and drugs, such as that of his colleagues, inefficiently quenches Bateman’s yearning to kill, a symptom of the ailment which afflicts this kind of American society.

Reaching for a diversion from this lifestyle, Ginsberg similarly presents the human being taking on her own methods to reaching an escape from the incarceration of her societal roles that she insists on playing. She takes part in the external pleasures of  “drugs… alcohol and cock” (11), a hubristic act in an attempt to reach happiness before she is forcefully shocked herself out of her “natural” ecstasy by Moloch, the canite demon in “Howl”. She diverts herself from the constructs of societal norms, extending to the divine in an “ancient heavenly connection”(3) in a moment of flooding freedom, clinging to her daily sojourn. In this way, the human being has the ability to achieve a moment of peace without dragging in the body of the taboo and monstrous lifestyle of Patrick Bateman. Comparable to the human beings diversion in Howl, American Psycho invokes these occuring themes and motifs as well. Throughout the film, drugs, sex, and alcohol exist as a crutch, even a prevailing  mechanism for the most elite in the business world. These imperious characters spend their free time worrying about how “good [a] bathroom [is] to do coke in” and a woman “who will satisfy all sexual demands… without being too slutty about things.” Their domineering traits, employed by the demands of a competitive and hypermasculine culture, force them to escape to a realm that Ginsbers identifies as a “starry dynamo in the machinery of night” (3), unable to find happiness in their own realities. On my reading, these men, much like the human being, cling to any escape from her actuality and the mockery of her embarrassingly simple existence. She lives detached from her self, existing as “some kind of abstraction…”, a conceptual version of who she really appears to exist. Through the human being’s process of seeking the fundamental life of the “American dream” she finds herself in a tortured state of being. The shallow ideology that supports the capitalistic “American dream”, destructive in nature, embeds itself in her and manifests into a bitter existence. Her “self” and who she once lived as subsists in disunity, emblematic of an eristic existence.  Her life is now one of dischord and friction between who she wants to be and who she is forced to routinely dwell as and against. She now remains as an imitation of herself, her past ideals forgotten, clocked-out of her pneuma, living solely for the tasks she must complete. Although she has reached a point of supposed success, what was seemingly her goal, she remains yearning and pining to bridge her existence to that of the forgotten American dream. In this way, the divide between attaining the “American dream” and the happiness beyond the bounds of that notion exists as a liminal space she cannot cross. Here, the human being finds herself forced to remain trapped by the societal duties of the “American dream” or live detached from this reverie eternally. She remains fastened between the two, struggling, possibly even failing to mediate between them. This  detrimental life she leads Ginsberg, diagnosing this as  “the narcotic haze of capitalism” (51), which blinds her as she takes a proverbial drag from that cigarette of an  inescapable and monstrous ideals of a capitalistic driven democracy. What she was once in awe of now embodies that of her nemesis. She lives howling for those who “bared their brains to Heaven…” (4) and howls for the “ancient heavenly connection”(3) and  “though [she] can hide [her] cold gaze, and you can shake [her] hand, [she] is simply not there.” In the human being’s attempt to sprout form the soil of the forgotten American dream, she diverges from her once un-tainted desires to a corrupted agenda. Only when she realizes that this seeded perversion has bloomed like a “sunflower…on top of a pile of ancient sawdust” (4), does she have the choice to escape.

Vanya Suchan is a student who attends Lakehill Preparatory in Dallas, Texas where she studies and excels in deep textual analyzation of literature and poetics. Her work mainly focuses on the human being’s existence in dialogue with other texts. She hopes to be able to share her work with others and to help readers be as passionate about literature as she is.