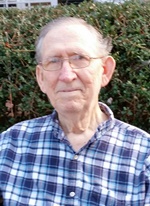 THE VISITS
By David Massey

They drove deeper into the country, up and down hills, through pine and scrub forests on both sides of the highway, until they came to the dirt road that left the highway across from the country general store.  As always, they talked but little, although he told Dorothy how much he liked Paul, his favorite uncle.  She listened quietly, but in her manner was the reserve and calm thrill of anticipation that always came over her when she was embarking on anything new with him.  By the side of the road rose clay hillsides; the road had been cut out of this clay.  He wondered what his wife was thinking as they continued along in the midst of hardscrabble farms.  He wondered what she thought of the countryside and of the probable life that people lived here; what she was anticipating was in his wonder, yet he knew she would not tell him.  Other than explanations of what they ought to do in practical affairs, she never told him her thoughts except as terse enlightenment.  These moments came in social situations, usually in a single sentence, as if she begrudged him the words; though but seventeen, she always knew the meaning of people’s conduct, while he would stroll blithely through social landmines until they exploded.  He thought he had a more catholic understanding than Dorothy, but her reserve gave him the uneasy feeling that she believed herself his superior.  He wished she would be more forthcoming with him.  His young wife seemed to him one of the most insular of people (although he had often heard her talking unreservedly with others, even men she hardly knew; taking candy from strangers, as it were).

They were not expected; Lee had just decided to drop in on his uncle as he had done a number of times before (and as he often did at the homes of his friends).  Lee got out and walked around the car to open the door for Dorothy.  She liked this chivalry.  As they turned to walk toward the side door into the kitchen, she passed her right hand lightly onto his arm.  She had taught him this etiquette.

When Sarah opened the door to them, her face flushed.  “Lee!” she said.  “And this is your wife!”

“Sarah, my wife Dorothy.  Dorothy, this is my Aunt Sarah.”

The two women greeted one another cordially.  They seemed to like one another.  Sarah, who was cooking, invited Lee and Dorothy to seat themselves at the kitchen table.  Lee held Dorothy’s chair for her, then sat on the opposite side of the table.

“Paul is in the bedroom,” Sarah said.  “He’ll be right out.  Would you like anything to drink?”

“Only some water, thank you,” Dorothy said.

Sarah poured two glasses of ice water from a pitcher.  At that moment, the door at the end of the room swung open and Paul appeared.  Something came over Dorothy – rigidness, fright, anger.  Paul, who beamed upon seeing Lee, gazed at Dorothy in wonderment.  “Hello!” he said.  “Lee and his young wife!  I’m so delighted to see you!”  He came quickly toward them holding out his hand to shake Dorothy’s, but she held her hands close to her body on the edge of the tabletop, leaning away from him, at once livid and frightened.  Paul recovered from his brief discomfiture and sat at the end of the table.

“Well, this is wonderful,” he said.  “Where are you from, darling?”

“Roperville.  Yes.  I went to Roperville once.  I was looking for used farm equipment.  I went to a farmhouse where some had been advertised, but when I knocked on the front door, nobody answered.  I thought the people might be in the back yard, so I walked around the house, and there was this little girl. – She was dancing.”  He paused and looked hard at Dorothy.  She leaned away, face frozen.  “Anyway, I enjoyed myself tremendously that day.”

He waited but Dorothy said nothing.  “Well, that’s my story about Roperville,” he said, getting up.  “I’ll be back in a minute.  I’ve got to take care of some things.”  He left through the door he had come in through.

Dorothy immediately leaned toward Lee and hissed in a whisper that he could hear but Sarah probably could not, “I want to go!”

He resisted.  Turning toward Sarah, he said, “Is Paul farming full time now?  I notice all his fields look cultivated.”

“Yes, he loves it.”  She turned her back on her guests to take care of her cooking.  Dorothy kicked Lee under the table.  “I want to leave,” she hissed.

“I don’t like him.”  She bit off each word, her whole person rigid, fury in her eyes and the pallor of her face.

It would be futile to resist.  He raised his voice and said, “Sarah, we’ve got to go.”

Dorothy was already on her feet.  “Yes, we’ve got to go,” she said.

The door at the end of the room swung open and Paul reappeared.  He saw they were leaving.

“You’re not leaving already?” he said.  “You’ve got to stay for dinner.  We’re having pork chops and mashed potatoes.”

“They have to go,” Sarah said.

As Paul protested, Lee put his hand on his wife’s back and streered her out the door and toward the car.  Paul followed, objecting.  At that moment, crying, “Oh!” Dorothy put her hand to her ear.

“Did you get stung by a yellow jacket?” Paul said.  “There’s a yellow jacket nest in that tree – I’ve been meaning to get rid of it, I should have gotten rid of it.  Let me see that, dear.”

“Where did it get you?” Paul said.

“I think it got her behind her ear,” Lee said.

“Let me put some tobacco on that,” Paul said.  “That will draw the poison out.”

“You can’t go running off like this,” Paul insisted.  “Just wait here for a second while I get some tobacco.”

She resigned herself.  He came back with tobacco and put it on the sting wound and put adhesive tape over the tobacco to hold it in place.  She endured his ministrations, Lee felt, with an ill grace.  He glanced at Paul anxiously to see if he was offended.

“There.  That will draw out the poison,” Paul said.

Lee thanked him and he and Dorothy said their goodbyes.  In the car, in what he knew was a wounded voice, he said, “Why didn’t you like him?”

“I just don’t,” she said through a clenched jaw.  They said nothing of moment the rest of the way home.  They passed an unquiet evening and went to bed dissatisfied with one another.

Next morning at 7:30 Dorothy went off to work and Lee was left to ponder the visit to Uncle Paul.  He got ready for work and at about noon sauntered out of the apartment.  When he was a few paces from his car, he was amazed to see Uncle Paul crossing the street toward him.  Paul seemed disappointed to see him but covered his feelings in a show of bonhomie.

“Where are you going?” Lee said.

“That’s too bad.  I did hope we could get over our little misunderstanding of yesterday.  Well, maybe I’ll come back.”

He did not know how to respond.  He could not say Dorothy would be glad to see Paul because she clearly would not.  They exchanged a few more words and Paul left.

Lee was distressed by Paul’s visit but decided to suppress thoughts of it.  He went to work and had a hard day at the factory.  That evening he told Dorothy of Paul’s visit and the hint that he might come back.  Dorothy exploded in fury, “He’d better not show up at this door.  I’ll call the police!”

Lee looked at her in bafflement.  Her actions appeared unaccountable.  What had Paul ever done to her?  But she often did things he did not understand and would not explain herself to him.  Once when he complained that she did not try to understand him, she said, “I believe I do understand you.  And don’t you think a marriage should be a two-way street?”  When he asked what she meant, she said, “Never mind.  You wouldn’t comprehend.”  He was stung, but could get nothing else out of her.  Now he saw he could not be Paul’s nephew as long as he was married to Dorothy.  But why can’t I? he thought.  Then there came knocking at the back door of his mind an awful connection between his uncle and his wife.  He drew back in horror.  He did not want to see what such a thing had to do with Dorothy and Paul.  He decided the best thing for his peace of mind was to forget he had ever thought of it.

He did not know if Paul ever came back.

David Massey has a Masters Degree in English Literature After 1660 from The University of South Carolina and, while there, took creative writing classes under George Garrett and James Dickey.  He turned rather belatedly to an earnest engagement with the craft of fiction but has made progress of late.  In 2017 he had two short stories published and so far in 2018 has had a blog post on the craft of fiction published in Black Fox Literary Magazine.