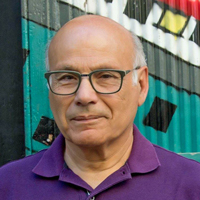 How many times do I think I’ve lost
a river, culture, language, the sense of the first space
and in the right place. Despite the arbitrary questions
of certain races, the earth has marked the hands and arms
in the same way, the scars of the veins, sometimes brown, other times, gold,
everything, before sinking under the weight, the night.
I never wanted to grow up to be anything horrible
as a man, just a simple human being.
This afternoon a pulse touches me as if the rock waited for the wave to take off the algae.
Outside the wind builds and disperses the clouds,
a look at the time reveals to me that I have walked as if climbing a ladder.
There is no surface without hinge, support or screw.
An aluminum line as grooved ensures the foot, step by step, I’m gaining ground,
floating floors groan under the weight of oldness,
some shadow obscures a right angle.
This year has not been completely standing, although the body is safe,
the flesh is still alive.  I have scratched the dust with sticks,
the knees have been tilted, sometimes submerged in some nostalgia,
but without knowing when, where, why. One happens between sleep and wakefulness.
Not all things are full of gods, in addition, there are different colors.
It is required to pronounce oneself in reverse to pronounce oneself,
lack of company is also part of the game.
Conversion is part of the prodigy of light (it’s part).
Perhaps, if I shake Zeus’s finger I will have a lightning,
Then, I will see the avenue that has been stolen. With the mud,
you can always make drawings, but the steel is calibrated.
I look back: so many things I should bury.
How to dissolve this life up to get me to the next.

Oh, of those who believe that the
city is full of friendly citizens, but they are dreaming thirsty of emptiness.
An epic determination to predetermine the body in the here / now. That’s a fact.

I make myself into as tight as possible in crowds
As a courtesy to other people. They give me back an obscure sound. They live in a different gravity, each one is merely a protagonist of his mirror,
there is not a residue of the emotion’s myth.
they do not zoom out my grief under my feet, they feel great being just a wall

but above all they kill, the dreams are shipwrecked, and vocations die uncomfortable

We are volumetric examples that we live a surrealist century.

Eduardo Escalante is a writer and researcher living in Valparaíso, Chile; he publishes regularly in Hispanic Reviews (Signum Nous, Ariadna, Nagari, Espacio Luke, Lakuma Pusaki, among others); and reviews in English (StlylusLit, Writer Resits, Spillwords, Slamchop and in Gramma Poetry).