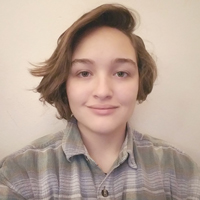 My Grandma was eighty-six when we admitted her to the hospital. There, rubber-gloved hands cared for her, piercing needles into the walls of her veins and connecting monitors to her heart. It was like that for a year, machines encroaching on her dilapidated muscles like she was a specimen under scrutiny; something she never deserved.

She’d take her medications every day, like she was told to do; I don’t really remember what medications they were, but I think she took around seven, daily. Early mornings and late afternoons, she watched the news on a small T.V. in the corner, even though my mother insisted “that garbage will rise her blood pressure.”

Everything correlated together so clean-cut, it was almost as if that hospital was the embodiment of a constant surgery, its organization an incision on the white-washed walls and skin-colored tiles.

I know she must’ve hated it; the uniformity, the child-like polka-dots that littered her night gown, her skeletal form, and the phrases nurses eased off their tongues like, “Ms. Crow, please sit up,” or “Ms. Crow you have to eat to be strong,” or, her favorite, “You look lovely today, Ms. Crow.”

I was so young, then; too young to understand most things like death, or machines, or old age. But I’d still bring her drawings from kindergarten, or a card that had all its words misspelled, because I knew it would make her smile. Her voice, a severed wing, she’d utter, “Oh, Brandon. That’s so sweet. So sweet.” Other days, though, her spider-silk hair would stick out from her skull and she’d stare vacantly at the flies beating their little bodies against the sun-oppressed window.

She’d still speak to me, though, even if it was difficult for her; it was usually little words, or small sentences. Whatever she could get out that took the least amount of effort.

One of the topics she’d go on about was Grandpa; how he was going to be there. She never really specified what ‘there’ was but, looking back, it was probably some version of heaven she’d created in her mind.

She said one day, soon, it was just going the two of them; they would have a nice little picnic next to a stream, the kind five-year-olds venture to nab tadpoles with little nets, in which they were going to talk about the weather, about their aged souls, and how they were young again.

She said they would get married, then; the reception would be at night, in which celestial bodies could hover over their love and witness their vows as they sixty years ago, and the way they hold each other like they’ve never held another human being.

I told her I wanted to be there for it; softly laughing at my request, she turned her face in my direction and said, “Of course, honey, we’ll wait for you.”

She meant what she said; she always did. She said until I got there, she would talk to grandpa about leaf patterns, or the variety of shapes a pebble can have, as their feet slid along moss-covered rocks in that thin stream.

My grandma was like that; she could always talk about the natural world like it was another appendage of her body. At the hospital, she would share the dreams she had; dreams she’d wake to in the middle of the night where meadows opened her chest and guided her down some withered path to the hills, where she’d traveled, barefoot, dirt-toed, through long strands of grass and fluttering pink flowers.

She’d tell me these things as if she believed them to be true.

She spent days searching out her grimy windows for those dreams; observing clouds that grazed across the sky like they were tuffs of white manatees. It didn’t compare to the ones back home, but she still saw something in New York’s bog that gave her happiness.

She told me it was all she wanted when she died; everything that made her feel something. Shifting from her vegetative position, one day, she encased my small, pudgy hands in her grasp.

Staring up at the ceiling, she said, “I prayed to drift away in a dream. But they forget, Brandon; God can’t do everything.”

Her blue eyes lingered to my startled, chubby-cheeked face, and her lips attempted a smile, but it only became elastic over her jawline.

A week later, we buried her.

My mother didn’t shed many tears at the funeral, gripping my hand the whole time like a rubber glove. When the casket began to make its decent into the ground, her fingers tightened and her bones began to shake within her skin. But she kept silent.

I take another drag of my cigarette, and blow its toxins into stiff air of the bar.

It’s only a white sheet in my memory, now; the hospital. The funeral. My grandmother.

My gray eyes sweep over the bar’s patrons as they watch another football game on the box T.V..

“What the hell am I doing?” I question, wiping the counter with a wet rag. My quiet outburst receives a dirty look from one of the old bastards sitting at a table, and I shoot him a glare; his piggish eyes bore past me and he goes back to his whiskey. I grimace, placing my vision on the particles sprayed across the counter.

Disgusting, I think, cleaning the table with more vengeance.

The bar closes late that night, and when I get home, Jesse is already in bed.

I shed off my uniform and throw it into a chair, curling up next to her thin body, making sure not to wake her.

I place a cigarette in between my lips and I light it, gently pulling her close as I put my arm above her head.

Then, in that moment, everything is still. I breathe in the smoke and blow it out, drooping my eyelids at the familiar habit.

“Put it away, Brandon,” Jesse says from under me.

I look down to find her luminous green eyes staring at the cancerous material in between the nook of my index and middle finger.

“Put. It. Away,” she says again, all slow-like to highlight how stupid she thinks I am. I glare at her, turn away, and take another drag.

I look down at her again and her eyes are lax; an unreadable softness that always makes me feel surrounded. She wraps her arms around my torso.

I move my gaze away from her. That look; those words. She’s corning me.

I glance at our apartment; at its miniscule living space racking up over nine-hundred dollars a month in rent, and then towards my stained uniform that backbends over a foldable chair near the bathroom door.

My voice is hollow; so weak and unconvincing. I discard the butt of my cig into a styrofoam cup.

The moon is blue this evening. It shrouds the room in a colorless hue that reaches across the bed like a tired body, dancing in the corners of the room and jumping over disabled pizza boxes and empty bottles of Coors Light. It’s a ghost, I think. But I don’t know them.

“You’re lying,” she murmurs, and I know, then, she has me. It’s the shadow in her face.

“It’s not like telling you would change it,” I say to her, reaching for a half-empty bottle of beer. It’s taste is flat against my tongue, and I want to gag, but I would do anything to distract this situation, even if it means opening up another argument about my drinking problem. But the pale light from the open curtains passes through my face, and I know I look terrified.

“What do you mean by that, Brandon?”

I sigh, putting down the beer. She’s cornered me.

“What do you mean? I thought she passed away, like, forever ago.”

“Thirty years ago, actually. And that doesn’t mean anything,” I say, retracting my arm from her and wringing my hands over my stomach.

“My… my Grandma told me a lot things before she died. Doctors said it was all delusional, but I’ve never been able to forget it.”

Jesse reaches for my hands, melting their tenseness with hers like putty.

“It’s okay to be confused, or frustrated; you were only six.”

In that moment, I feel splinters seep into my stomach, erecting my spine; I see the bodies dance faster.

“But I’m not confused. Or frustrated. I feel… incomplete. Does that make sense? It’s like she was telling me all these beautiful things and left me here… it was about heaven. Her heaven. She told me what it was going to look like, what she was going to do; she said they were going to wait for me; her and Grandpa,” I say, my voice shaking.

“I thought you didn’t believe in God?”

She rests her head on my chest and my body slacks. I take a breath.

“I mean, I guess. This isn’t really about that.”

“It’s about heaven? Are you worried over whether you’re going to – ?”

“No. You just don’t understand, Jesse. What am I doing with my life? I work at a bar, and I’m paid by old geezers who need cabs to take them home because they’re so wasted. Don’t you get it?” I seethe.

“I don’t like your job either, Brandon,” she says.

“Thanks, because I didn’t know that, did I?”

She shoots me a heated stare, “Why are you so angry? What have I done to you? You came home in a bad mood. I’m doing the best I can!”

“I just want to leave, Jesse. To go to the place my Grandma spoke of.”

Then there is silence; only the hum of the ceiling fan whipping the air comes through. Jesse folds into me.

Jesse runs her finger up and down my rumbling chest.

I don’t cry; every fiber in my being yearns to cry, but I know I shouldn’t be sad. I take a breath. The bodies drop their dance and recede within the walls.

A lull casts over us, stiff from words and cigarette smoke.

“I miss her, Jesse,” I swallow, draping an arm across her small shoulders and gripping her tightly.

“Every part of her that left me here in the dark.”

Reece Braswell is currently a Junior in high school attending Douglas Anderson School of the Arts in Jacksonville, Florida and have been a part of the creative writing program for three years. She writes as a form of therapy to connect with herself, others, and the world around her.