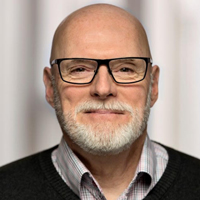 IN ANOTHER MAN’S POEM
by Gordon Roberts

a sad angel you are
squatting to guard the
doors to purgatory
with cowering gaze
I await your okay
judgment from a sad angel –
laughable, grotesque –
admit me to the place of
impermanence, so I
can pay my dues and be
on my way.

In another man’s poem

In another man’s poem
I am a midnight hunter, with a coin in my mouth as
he perches me on a ferry’s bow beside
the boatman’s living light – below –
eels on a black river.

In an ex-lover’s poem
I am a gypsy with bare feet
She browns me on the river’s beach –
banks dismal and water murky –
her poem sends a crocodile to seize my knees.

Who am I in my own poems?
Diluted black-ink night, grey is my regard
as I sicken, poised against a railing and
head hanging over the water’s slithering surface –
in my own lines, I drown.

Things no one will inherit

Grandma’s woolen blanket, repaired over the years
bought in New Jersey for the trip to Germany
on her ocean liner honeymoon
in the roaring 20s wrapped her shoulders warm
through Vermont winters
now my feet
in bed
worn thin by a hundred years of holes now
unequivocally the Danish winters will wear it down

Grandma’s expectations for circumcision that my cock carries
will not rock on
Her daughter had me, I had no one

Grandma bought into ‘deny yourself’
the price of acceptance in her New World
this German Jew immigrant at 5
arrived before the world wars
fell for an atheist goy
let her children chose their own
religion
When I emigrated I bought into the same story
Blanketing my passion for coaching basketball
in the Danish tongue
lost the soul of the game – keep your eye on the ball
In my family, that lesson is learned but will not be passed along
what has moved from Europe to the states and back again
is the mistaken attempt to assimilate at the cost of lost integrity

Grandma gave my parents two matching upholstered chairs
for their wedding – re-upholstered by them at least 5 times
made their every living-room move
my father still had his mother-in-law’s chairs when he died
my brother packed them for the flight to Denmark
I re-upholstered them from their inherited California yellow to royal blue
like the lost integrity, the chairs keep changing living-rooms and color

I am an ex-pat, living in Denmark for almost 40 years. I’ve published poems in now extinct journals such as The Piedmont Literary Review and San Fernando Poetry Journal. Also, in the 70s, I was co-editor of the college poetry magazine for my college in Dubuque, Iowa. In the 80s and 90s I edited books for academic Danes writing in English, performed sound poetry in bars, wrote scripts for and performed in political street theater. I continue to write poems to this day and again I’m curious to find out what others think of them.