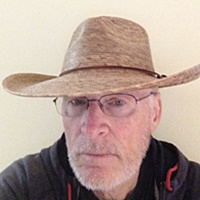 I slowly drove the car with my three young children along the frozen-dirt road that ran between the rows of trees. We were at a Christmas tree farm, an hour north of the Twin Cities in Minnesota, where we lived. On a Sunday afternoon in mid-December, I thought getting out of the house and cutting down our own Christmas tree might help cheer the kids up, and myself too. The excursion was a flop and adding to the forlorn mood though.

The weather was bleak: cold and windy with gray skies and snow flurries. As soon as I spotted a half decent tree, I tried to drum up some enthusiasm for helping to cut it down. None of my children had the least interest in getting out of the warm car. Who could blame them, when I felt the same way myself. I jumped out of the car, grabbed the saw from the trunk, and quickly cut the tree down.

As I tied the tree on the car’s roof, I recalled the wonderful time we had the previous year. The weather had been much better, but the big difference had been that Marie, their mother was with us.  Marie was the center, the heart and soul of our family. It felt very lonely without her. When I’d committed to solo parenting several days a week, I hadn’t anticipated how difficult it would be, and how much we’d all miss her.

Marie had left that morning to return to Cedar Rapids, Iowa, a four-hour drive away. We wouldn’t see her again until Friday afternoon. Sundays were the hardest time, especially during the four to five months of wintry weather in Minnesota. During the week, the kids went to school and I’d be at work.

Ever since Marie decided to go back to school to become an orthopedic physician assistant, I tried to be supportive and encouraging. I owed her that. She’d been a full-time mother up until then, which allowed me to concentrate on realizing my goal of becoming a tenured professor at the University of Minnesota.

I’d been an old-fashioned father, parenting more like my father’s generation than the somewhat more equally-shared approach of my son and two sons-in-law. If I’m being honest, I probably changed less than two dozen diapers in total with my three children. I’d been spoiled.

Marie had been the one who’d almost always gotten up in the middle of the night, when they cried in their cribs. She’d potty trained them. Much of my parenting involved fun activities, such as making snowmen in the winter and raking leaves in the fall and jumping in the leaf piles. One of my favorites was telling them bedtime stories, which I made up myself.

I shouldn’t completely disparage my role. When our children were young, there were more than enough parenting duties to go around. Both of our parents lived in California, so we didn’t have grandparents nearby to help. In fact, when we’d arrived in Minnesota, we hadn’t known a soul there.

The only school offering the orthopedic program Marie was interested in was Kirkwood Community College in Cedar Rapids. Our children ranged from eight to twelve years old, when Marie started the two-year program at Kirkwood. Our youngest daughter was old enough so that her mother’s absence wouldn’t be traumatic. Our two older children were not yet involved in lots of after-school activities, requiring shuttling them around. Much of the time Marie arranged her courses, so she had no Friday classes. She’d get back home either Thursday night or Friday morning.

The kids and I developed a routine for weekdays. They were old enough they got themselves up, dressed, and fixed their own breakfasts, usually just cereal and orange juice. All three rode a school bus to and from school. They got home at around the same time and had a key to the house.

I didn’t worry about them being home alone until I got back around 4:30. Our house was in a safe community-oriented neighborhood. We lived close to campus and I could be home in minutes. Our golden retriever put on a ferocious show, if a stranger showed up, but it was only an act. I did all the cooking and usually had dinner ready by six o’clock.

In the evenings there was homework, showers, and getting ready for bed, which required minimal help from me, usually on homework. I had time, after they were asleep, to get ready for my classes the next day. Sometimes I was too tired for my mind to function by then, and I’d have to set the alarm for 5:30 the next morning, which I hated.

As a university professor, I had more control over my schedule than most people. I could take someone to a doctor’s appointment for example, as long as it didn’t interfere with my teaching a class. Marie didn’t have classes during summer and worked at a medical clinic in Minneapolis that first year.

During bumpy times, the kids’ favorite refrain when things weren’t going well was some version of, “When’s Mom getting home?” And when I got frustrated trying to help with something she’d always done, I regularly snapped, “If Mom were here, she’d know what to do.”

One night I prepared a nice dinner: pork roast, mashed potatoes and string beans. I was darn proud of myself. I went to let the kids know that dinner was ready, and then headed back to the kitchen. I went ballistic when I saw what had happened.

Our golden retriever had helped himself to the pork roast, which was now on the floor. Some rather colorful language ensued, which got cut short. The dog choked and then vomited up a large chunk of meat, which it had gulped down.

I booted the dog out the back door. I yelled at the kids to stay upstairs and that dinner would be delayed. Staying mad wasn’t a luxury I could afford. I needed to cool off and get busy. After cleaning up after the dog, I was going to toss the pork roast into the trash.

I then surprised myself. I trimmed off the part of the meat the dog had eaten from, ran the roast under water from the kitchen faucet, turned the oven back on, and cooked it for another ten minutes.
There were many great times too. The kids and I had a few favorite TV shows we watched together. Sometimes as a break in the evenings, I put a record from a Broadway musical on the Hi Fi. We’d sing and dance to the show tunes. The favorite was “Fiddler on the Roof.“ I used to belt out, “If I were a rich man.”

We celebrated when Marie graduated and became an orthopedic physician assistant at a local hospital. Becoming a two working-parent family brought its own demands, but I was now ready to shoulder my share. Ever since my solo parenting, I’ve viewed the role played by mothers with new respect.

Alex de Cruz has had a passion for fiction and writing since reading Hemingway as a teenager. Recently, he’s become fascinated with writing flash fiction, short stories, and creative nonfiction. Alex’s work has been published in CafeLit, Flash Fiction Magazine, and Potato Soup Journal. He has forthcoming stories in Bull and Cross, Down in the Dirt and Scarlet Leaf Review. He grew up in Santa Cruz, California and now lives in Santa Barbara with his wife, after spending forty years in the Midwest.