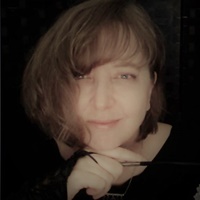 HER LOVING ARMS
by Marta Pelrine-Bacon

Ella Cairnsworth didn’t mean to kill her boyfriend today. She loved him most of the time, and when she’d imagined murdering him, she’d planned on poison. Poison required no muscle and no mess. He certainly was a mess now.

His body lay crumpled and bloodied at the bottom of the ravine. It was a shame to have ruined his pretty face like that. His prettiness was what first caught her attention.

The rescue crews were coming and she had her story. She had enough tears, cuts, and bruises for them to believe she’d almost tumbled over with him. There was no reason to tell them her boyfriend had hit her with the rock. Why start confessing his tendencies now? His mother was going to be upset as it was, and Ella liked her boyfriend’s mother. Poor woman.

Staring down at her boyfriend’s body, Ella still felt his chest against the palm of her hands. She’d had the weight of him in her hands and then nothing but air. He’d shouted. Moments after his weight against her vanished, so did his voice.

He must’ve been surprised her arms were that strong. “You feel as frail as a bird,” he said once while holding her wrist. He liked birds. He liked to say if he could have a super power, he’d want to fly. Then he would smile at her and say, “Your love makes me feel like I can fly already.”

“Sorry,” Ella said to his body at the bottom of the ravine. “I couldn’t give you super powers.” A dark stained bloomed beneath him.

A shadow caught her attention and she looked up. A vulture soared. She hurled her cell phone at the thing. “You can’t have him,” she shouted. Her phone shattered below. “Damn.”

But looking down at her busted phone meant looking at him. “I’ll miss you,” she said. She held her arms out in front of her. Her arms were strong after all. She smiled.

The whipping of the helicopter cut through the air. Ella searched the sky in several directions before she saw its black dot. She thought of pitching something at it too. “If anyone is going to pick up his bones, it should be me,” she said. She’d used to run her fingers along his muscles when he was in a good mood. Maybe if he’d been in a good mood on this beautiful day…

The helicopter finished the last mile of its journey, and it hovered over her with its wind and noise. Rescuers came down a rope ladder and Ella rather wished heaven worked liked that. If angels dropped ropes to earth when you were in trouble, you’d know exactly where and how to go. But ropes, she sighed, weren’t from angels. There’d never been ropes when she’d needed them before.
A rescuer wrapped a blanket around her and began to check her bones and shined a pinpoint light into her eyes. Looking for injuries and guilt, Ella imagined.

Other rescuers were lowered themselves down to her boyfriend. “He’s alive,” came the call. “He’s alive!”

“This one’s in shock,” her rescuer said kneeling beside her. The medic rummaged through his pack. “That’s quite a gash you’ve got above your eye,” he said.

“I fell,” she mumbled because medics believed in falls. Everyone believed in what they expected, and she believed her boyfriend was dead.

“You’re lucky you didn’t go over the side too.”

“Is my boyfriend going to be all right?” The words clawed her throat.

The medic furrowed his brow. “You rest. Explain what happened later.” He buckled straps around her for the helicopter to lift her up. “You keep your boyfriend in your prayers, sweetheart, and maybe he’ll turn out all right.”

In the helicopter, she rested on her own thin stretcher, her rescuer beside her, but she kept her eyes on her boyfriend, strapped into place. The air smelled of blood, sweat, and dirt. Other rescuers bent over him, cleaning up wounds, covering gashes, and Ella couldn’t see what else they were doing to save his life.

His bottom lip was ripped and his eyes swollen and coated with blood. To everyone’s surprise, a word escaped his throat. It gurgled and rasped, and it brought blood up with it. “I.”

Ella was going to cry. She knew her boyfriend would speak if he wanted. “You’ll listen to me,” he liked say before knocking her to her knees. He had a beautiful voice.

“Listen,” he would shout and wrench her by her hair. “I have something to say to you.”

A bubble of blood formed at his mouth. “I.”

The rescuers looked over at Ella.

The rescuers did things Ella didn’t understand—things to start his heart, things to find his pulse, things to stop his blood leaving his body. In her boyfriend’s hand was the rock that had opened the gash over her eye. He always had a tight grip.

Ella touched the nearest rescuer on the back. He startled and turned. “Miss—” “May I have that?” she asked and pointed.

Confused the rescuer looked at the boyfriend’s body. “The rock?”

She nodded. The other rescuers were working less furiously now. The rescuer pried the bloody rock from the young man’s fingers.

The rescuers muttered amongst themselves. “They must’ve been a pretty couple,” said one.

Ella held the rock. It was pretty. The weight reminded her of the strength in her arms.

Marta Pelrine-Bacon: I’m an author and artist in Austin, Texas. I’ve had flash fiction published in 50 to 1 (Drifting through Space) and Flash Fiction Magazine (Devotion). I’ve a had a short story published in The Austin Review (The Longest Love Letter). And two of my fairy tales, Fear of Apples and The Sky Fell in Love published in Cabinet des Fees and The Enchanted Conversation, respectively. My debut novel, The Blue Jar, was published by Plum Tree Books/UK in 2013.