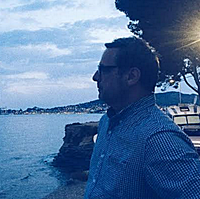 The music we listening to no longer interested me and became noise. I preferred my own music; it helped keep me alert, the way it was on the road before losing my job. This stuff was an invasion of my space. “C’mon babe, change it already, put on 101.9,” I said.

“I want to listen to this,” she said.

Our relationship had changed. Her criticisms became sudden, frequent, pointed, and often unfair.

The light to changed to green. I turned into the first parking lot I could find. The attendant, a man wearing a black jumpsuit, approached. He motioned for me to lower my window. “Ten bucks,” he said, in an unidentifiable foreign accent.

I grimaced. “Only going to be a few minutes —”

“Here,” Jennie said. She grabbed a twenty from her purse and held it out. The man’s arm reached past me, his enormous hairy hand with a chipped thumbnail clamped hold of the bill.

“Thank you,” he said, returning a ten. He pointed to a shaded corner spot, as if he knew why we were there. “Park over there.”

I turned off the ignition. She asked me to turn it on again so she could roll down the window.

My hands held the wheel at the ten and two position; I squeezed them, watching the veins on the tops of my hands disappear, waiting for her. She brought down her visor and flipped open the mirror to freshen her lipstick. She opened her bag and pulled out a scented hand sanitizer. The sound of her hands rubbing together, her skin, eased me, made me weak.

I turned off the ignition. The quiet was deafening.

When I wasn’t with her I’d smell a reminder, maybe a waft of perfume from a woman in a checkout line, or the shampoo bottle in the shower. In fights with her I was afraid to win, but I believed I listened.

“Are you naive, or just blind,” she said.

“Over a radio station, really?”

“Turn on the car again.” Her manicured nail covered the window button and the window slid down another inch. She pulled out a cigarette from inside her purse and placed it between her glossed lips.

She scoffed, lit the cigarette, inhaled and aimed a lungful of smoke out of the window crack “In the car.”

I turned and looked at her. “What’s going on, Jen.”

She blew another smoke stream out the window. “I don’t know. It’s different. And I’m not sure it’ll ever be the same.”

I considered this. She’d developed an aversion to intimacy, an impatience in her kiss — terrifying because it lost me, and I hated feeling lost. I fantasized she might forget it all, maybe jump on top of me, kiss me with abandon.

“Don’t you see we’re on two different planes,” she said. She looked out the window, threw out the butt. “You said you’d be back to work by now — “

“I’ve been carrying us.” she said.

“Jen, are you naive, or just blind. What the hell do you think unemployment is, what it means?”

“And how long is that going to last,” she said. “You’re getting used to it. Liking those handouts — maybe too much.”

“My God where are those words coming from? Do I know you anymore? She said nothing. “Just tell me, goddammit.”

The parking attendant walked by. “Turn on the car,” she said. I did. She rolled up the window. “Thanks. And yeah.”

As the attendant passed he turned some and nodded just once and smiled. Afterward, a curious, enjoyable sensation flooded me, as if he knew and was telling me it would all be okay, no matter what, as if part of a complex human gestalt connecting us all.

I placed both hands on the steering wheel again; this time I did not squeeze.

We’d reached the high point of our conversation and maybe we’d leave and maybe we’d break up and find other people. She pulled out another cigarette but didn’t light it.

“So that’s it. I’m not good enough for you anymore. The dream job I had for six years comes to an end at no fault of my own, and the girl who once loved me—”

“Have you listened to anything I’ve said to you?”

“Jen, we’re sitting in a goddam parking lot talking about your peeve with my unemployment at the moment.”

“Jesus, you don’t listen, you just keep talking, and somehow the conversation becomes about you.”

I scoffed and shook my head.

“I’d be lying if I said I didn’t love you. But something’s happened since you lost your job. I don’t know what it is.”

“Where does that leave us?” I said.

Her phone pinged. She reached for it.

By the expression on her face, I guessed she knew the answer. And maybe for once, she’d known I’d been listening.

I turned on the ignition.

Jim Bolone has been a bartender, drummer, dock porter, bouncer, and for the past twenty-three years, a junior high teacher in Ohio. Jim grew up in Detroit, Michigan, attended the Detroit Public Schools, and ultimately graduated from Wayne State University with a B.A. in English. Jim and his wife, Lori, share their home with three great kids, a dog, a cat, and lots of books.