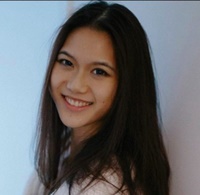 She was talking about Damien again.
They were sprawled out by the shore in bikinis, Tati in her white lace set, Ruth in a retro polka-dotted blue. Ruth had designed this new set just for Tati, with a sheer billowing skirt made of old saris, embroidered in gold like a goddess. Under the steadily darkening sky they stared out at the round ocean, a giant circle around the island.
“Y’know one thing I regret?” Tati spoke with a half-smile, leaning back with her weight on her arms, legs stretched out in the shallow washing waves. She wiggled her toes absently. “Confronting him that morning. Oh my god.” She rolled her eyes up, head flopping back as she gazed at the sky. “If I can undo one thing in my life, it would be letting him know that I knew.”
Tati had called Ruth up a few nights ago, sobbing over the line. Ruth could hardly make out her words through her sobbing, but eventually figured out there had been another woman’s shoes at Damien’s doorstep. Ruth didn’t say much, just listened to Tati sob. Then she’d asked Tati out to the beach. She’d wanted to anyway; she wanted some good shots of Tati in her new outfit, and thought Tati could use a distraction.
Ruth frowned. “You mean when you checked his phone and found out about his Tinder affairs?”
“I broke up with him for that, but after that we were never the same. That was when he gave up on his attempt at commitment and started sleeping around for real. At least before it was only talk. Just dirty talk with other women.” She drew her knees to herself, folded her arms over her knees and rested her chin on them. “I can deal with talk.”
She looked too vulnerable, skinny limbs all folded into herself like that. Ruth wanted to hug her. She shifted in her sand instead and looked away. A dangerous rage was beating its great wings inside her breast, and she struggled to keep her level. “You would silently bear with his virtual two-timing. Really.”
“Yes. I can.” A small, stony, determined voice. “It may be hard for you to believe, but after all, I’ve already been dealing with it for a long time.”
“It wouldn’t have made a difference.”
“How do you know?” Tati said reasonably. “You don’t know him.” She sighed, lying down to lay her head on Ruth’s lap. Ruth watched the droplets roll down her chin, her collarbones, the valley between her breasts. Tati’s breasts were small and brown and perky, unlike Ruth’s. Leaving glistening trails behind them, the droplets of water crept round the circle of her arm till they hung above the washing waves. There they paused, quivering. Ruth felt their uncertainty as a tremor in her skin. Tati’s hair floated on her thighs, straight fine black strands.
“I would have changed myself,” Tati said.
“You don’t have to,” Ruth growled. Ruth felt her heart ache. She loathed herself with a ferocity she couldn’t begin to face. “He’s not worth it,” she said. Another meaningless cliché. What could she say? Vaguely, as if from a great distance, as though from her body she were strangely detached, Ruth sensed frustration building, a sinking hopelessness. Like an alien flying overhead she saw them both, sitting on the sand. She didn’t recognise herself. Who was this, this block of cold clay beside this folded-in girl, beautiful Tati with her chin on her knees, so sweet and sad and vulnerable?
“But how then,” cried Tati. “How do I fight if I don’t know my enemy?” She brushed tears and windswept hair from her face. “If I knew her, I might stand a chance! But all I have is a photo on his blog.”
Tati had shown Ruth the photograph a couple days ago, a picture of Damien with his arm around a woman. Tan, with broad shoulders, well-built and fleshy; sporty-looking, but far from Tati’s slim perfection. They looked happy and drunk, the photo badly taken. Damien was grinning, making a silly face at the camera and holding up two shot glasses covered the woman’s face. Ruth remembered the bartender who’d taken their photo. He was chatty and jolly and after a few drinks so were they. Damien had wanted a picture. She’d turned her face aside, leaned into Damien so that the shot glasses shielded her from the camera. Ruth wanted to tell Tati she was sorry, but she couldn’t. She wasn’t sorry. She would do it all over again.
Tenderly, Ruth stroked Tati’s cheek. Her lips were crusted with salt, slightly parted. Her breath soft and moist on Ruth’s fingers. Ruth wanted to tell her the truth—but not that truth. The truth had only three words. She slid her hand down, and as Tati turned in surprise, she waited, fingers trembling, her hand like a leaf on Tati’s waist.

Celine Low is a nomad writer, painter, dancer and secret bathroom-singer. She holds an MA in English Literature, and her writing is either published or forthcoming in the Muddy River Poetry Review, Fifty Word Stories, One Sentence Poems, BALLOONS Literary Journal, and 9Tales from Elsewhere, among others.