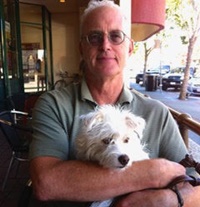 AT LEAST I KNOW I’M FREE
by
James Hanna

In the first week of Trump’s presidency, something unusual happened in Putnamville, Indiana. Sammy Spigot, a garrulous DJ on the local radio station, started playing only one song. The song was the Lee Greenwood classic, “I’m Proud to be an American,” and every day that week, Sammy played nothing else. He continued to announce the bake sales and high school basketball scores, but he did not show the slightest inclination to expand his song selections. And each time he played the song, he gave it a lively plug: “Hi there, folks. Slammin’ Sammy here. I’m bringing you a number from the eighties that will get you marchin’ in step.” On top of that, he would sing along—his rich baritone voice a fine complement to Lee Greenwood’s gravelly tenor.
Most of the folks in Putnamville already liked the song, so this constant repetition did not seem necessary. In fact, after Sammy broadcasted the song for the two hundred and fiftieth time, people began calling him at the radio station to express some irritation. “Now don’t get me wrong,” a caller might say, “Lee Greenwood’s a mighty fine singer. But how about a little Emmylou Harris or maybe some Conway Twitty.”
“You betcha,” Sammy would answer. “Always happy to take requests.” But after hanging up on his caller, he would revert to his patented spiel. “Folks, this is Slammin’ Sammy on WBW-AM, and I’m bringin’ you a knee-slappin’ song to help you get through the day.” And Lee Greenwood would again croon his trademark ballad while Sammy sang along.
Eventually, the song had the impact of Chinese water torture, and residents of Putnam County whispered among themselves. “Is he crazy?” some of them muttered. “Every day, that same damn song. Lee Greenwood’s a top-notch singer, but there’s such a thing as too much fun.” “Shut yer pie-hole,” others would whisper. “How can you say something like that? If Sammy is crazy, so is Trump. He uses that song at all of his rallies and nobody complains.” A few of Trump’s supporters, incensed by the controversy, expressed their indignation by singing along with Sammy.
But less forgiving citizens continued to phone the station, and one of then urged Sammy to expand his playlist if he hoped to keep his job. Sammy responded by playing John Conlee’s “Rose Colored Glasses,” but he cut it off after several bars to make a special announcement. “This is Slammin’ Sammy Spigot at WBW-AM, and I’m bringin’ you a golden oldie that’ll have you tappin’ your toes.” And again Sammy added his baritone to Lee Greenwood’s raspy voice, and again the airwaves shook with this impromptu duet.
When an op-ed popped up in the local newspaper, suggesting that Sammy be fired, several letters to the editor accused the author of censorship. If you shut down free speech, one letter declared, the pedophiles will take over. We’ll be forced to listen to Sex Pistol music and other lowlife songs. The author of the op-ed wrote back and said that Sammy belonged in a nuthouse—that his robotic raving did not amount anything resembling free speech. This statement was so un-American that a counter-protest arose. Throughout the county, People wore caps that said Let’s not silence Sammy.
At the end of the week, Sammy was still on the air, playing only that Lee Greenwood number. And armed rabble-rousers arrived in town and picketed the radio station. They were dressed in black like Johnny Cash, but their taunts were tone-deaf and hoarse, and their eyes were as cold as mackerels and terrible to behold. We are better than lemmings their placards declared—a most improbable claim. There could be little doubt that these cretins intended to rape everybody in town.
Soon troops from the town militia showed up at the radio station. They wore military surplus fatigues, they had rifles and anti-tank weapons, and those with baritone voices were singing in tune with Sammy. The local church choir also appeared and stood beside the militia, and the choir sang along in two-part harmony.
The citizens and the agitators faced each other on opposite sides of the street. It was a tribute to the singers, their mesmerizing voices, that the shooting did not start until they had sung the song twenty times. And after the ruckus was over and the wounded and dead were removed, Sammy announced that tomorrow he would be taking a holiday.
Slammin’ Sammy did not return to WBW-AM—he decided to live in Paris. It was rumored that he spent all his time in the Louvre serenading the Venus de Milo. The DJ who replaced him was named Boppin’ Brian Stinger, and he continued Sammy’s tradition of only playing one song. “We have a hit from the sixties,” Boppin’ Brian continually announced. “It’s the mellow voice of Bob Dylan singing ‘Knocking on Heaven’s Door.’”

James Hanna is a retired probation officer and a former fiction editor. His stories have been published in over thirty journals including Sixfold, Crack the Spine, and The Literary Review. James’ books, three of which have won awards, are available on Amazon.