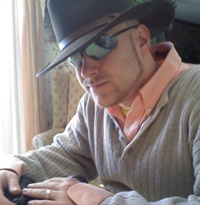 “Getting close?” she asked in a sleepy voice, then repositioned herself in her seat.

He nodded. “To Albany we are, we just cleared Schenectady.”

“Wow,” she replied, shaking her head to clear it.

“Were you sleeping, too?”

“I was,” he said with a smile, looking over at her.

“When did we,” she began slowly- almost coyly- then stopped.

“You mean, you mean?” he responded with equal coyness.

“Just after Utica. I guess the bright lights of dawn knocked us out.”

She smiled a smile of content, then patted the top of his right hand.

“I couldn’t have imagined a better partner.”

He beamed a correspondingly smile and reciprocated with his left hand on hers.

“How about we get coffees in Albany?” he suggested.

“That would be nice,” she agreed.

With that, they both fell silent, each knowing that what had to be said was said. Now, all they had to do was wait until the train started heading down the Hudson to say what needed to be said with absolute clarity.
After their coffees were finished- and the train made its way further and further down the east side of the river, the nature of their conversations took on topics of a probing and revelatory intensity. Subjects like happiness, contentment, closeness, attraction and need.
Finally, as the train passed under the George Washington Bridge, she turned to him and asked, “Why don’t you stay over the weekend?”
He turned, slightly, toward her.
“Alone or together?”
“Together- silly,” she gently admonished him and then pursed her lips, waiting for an answer.
“How would we do that- and where?” he asked. “I thought you were staying with your daughter- in Brooklyn?”
There were a few quick nods from her in the affirmative.
“You remember, don’t you, that I told you that I have my own room at her place. We could stay there.”
She paused for a moment, and he, sensing she was not finished, waited.
“It would be fun,” she continued, “we could spend the couple of days- we could be close. I would like that.”
She paused, again.
“Would you?”
He shifted in his seat, not because he was uncomfortable, but on the contrary, to lean in a little closer to her.
“I would like that- I would like that a lot, but I absolutely have to be back for tomorrow morning. Things are scheduled, I have to be there.”
She looked at him, now, not with the disappointment of rejection, but with a peacefulness of believing he was sincere.
They both looked out the window and saw they were slowly beginning the final approach to Penn Station. The river, the parklands were giving way to the subterranean darkness they knew was coming.
He looked over at her, knowing time was short.
Turning in his seat toward her, he began.
“Look, I think what you’re proposing is a wonderful idea. I would love nothing more than to spend a long weekend with you.”
She, now, also turned in her seat, toward him, with anticipatory eyes and smile.
“So?” she asked hopefully.
“So,” he continued, sensing now that what moments ago was nigh-near lost, had been regained.
“So,” he refrained, “why don’t we do this. Why don’t we take a rain check on the long weekend- maybe making it even longer- say, Wednesday through Monday, when the fall comes. It’s a good time of the year in the City.”
“It is, it is,” she agreed happily.
“But, in the meantime,” he went on, “why don’t we spend some time- together- back at home? How does that sound?”
She leaned in toward him and took his hand in her’s. “What do you have in mind?” she asked.
Now it was his turn to nod.
“Well, how about we start, next Thursday? You busy?”
She both shook her head and voiced the negative.
“Where?”
“There’s a donut shop, on a side street off of Brighton, just before the high school, coming from the mall. Let’s say, coffee and a donut at eleven AM in their dining room?’
“I’ll be there,” she confirmed, then leaned back in her seat, closed her eyes, while still holding on to his hand.
“Good,” he said, then, likewise, leaned back to rest.
The train, now, moved with a determination about it, almost as if it had been here- in the tunnels- countless times before- which it had- rocking back and forth through the sidewalk-light punctuated darkness, until, finally, it stopped.
They had arrived.
The car lights came on, but they sat there like the veteran travelers they were and waited, watching the near-to-insane rush to get out of the car and off of the train.
“Let’s just wait until they’re all done and gone,” he advised her, as he sat forward on the edge of his seat.
“By the way,” he began his question, “what’s your daughter’s name?”
“Anna,” she told him, proudly.
“Where’s Anna meeting you?”
“At the ‘Big Board,’ somewhere around there.”
Finally, the car had cleared and they proceeded to stand and move to the aisle.
He reached over for his bag, then slung it over his shoulder before turning to her.
“Your bag?” he asked. “I’ll carry it for you.”
She stood up from her seat, smiled, and then picked up her purse.
“This is all I need.’
He, in turn, was momentarily surprised.
Recognizing this, she added quickly, “I have everything at Anna’s place. It lets me travel light.”
Impressed, he nodded in recognition and simply said, “Nice.”
They exited the car and made their way up to the waiting room and ticket counter level, before moving on to the concourse.
There, they made a right turn and began walking toward the ‘Big Board’ lobby, side by side.
She wanting to hold his hand- but she did not.
He wanting to alternate from hand on her shoulder, then around her waist- but he did not.
Was it too soon for that kind of closeness?
No.
Was it too soon for that kind of closeness in public- amongst total strangers?
Again- no.

Then what was it?
It was both of them knowing that a time for parting would soon be upon them, yet, totally not knowing how to handle it.

Finally, they reached the corner around which- to the right- would be “The Big Board.”
They stopped, looked, scrutinized and surveyed the room, trying to find an empty- and as private- a spot as possible.
“Over here,” he said, spying a space by one of the pillars, then taking her by the arm and directing her that way.
“There you go,” he told her once she had leaned back against a pillar that faced the concourse and the shops. “From here, you’ll be able to spot her once she gets here.”
She nodded, looked away, then quickly looked back at him.
“I guess this is it,” she finally managed.
He looked at her intently, scrutinizing what he thought was a soft glint in the corner of her eyes.
“Just until Thursday morning,” he reassured her.
“You promise?” she asked.
“Cross-my-heart,” he offered in words and the corresponding gesture with his right hand across his chest.
They, then, free-fell into a prolonged moment of awkwardness until she finally broke the silence.
“I suppose you should go, your time is short.”
He readied himself to leave, shifting his weight- slightly- from one side to the other, while at the same time transferring his bag from his right hand to his left, then back, again.
“I suppose,” he said in a resignful tone. “Okay, so, I’ll see you Thursday?”
“You will.”
“All right, be careful and be safe,” he said in a concluding sort of way, then turned to leave.
It was then, that she called out to him, “Wait!” in an affectionately forceful voice. “One last thing,” she added.
He turned and walked the few steps back to within inches of her.
“Yes?” he asked.
She pulled herself off of the pillar and stepped forward to meet him.
“Kiss me before you go,” she said in a soft, delicate and unmistakable way, just before they embraced on the edge of the concourse.