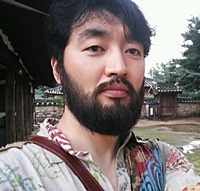 The Child I Was

They were like some terrible writings
Wrought by a Fate’s fearful hand
To dictate its warnings by lightnings
No man can decipher to comprehend,

With each stroke’s streaking effulgence
Followed by a split second of silence
To strike a harking heart utterly speechless
As a thundering voice from dark emptiness.

You may just watch it far away gathering,
The likes of which you have never seen,
Or find yourself in the middle of its pouring,
Drenched with grief like you’ve never been,

Till, through the layers of cloud
Out comes the sun shining so proud
To build an arch blithe and bright
Soon to be disappearing in blissful light,

As a dream realized in a dream
Melts away in a tearful stream,
Like when you’ve outgrown a reality,
Waking up to another reality.

That is beyond all hue and dye
Or any words man can contrive,
That only our heart, fated to die,
Can feel to dream on, while alive.

The Child I was in awe of the rainbow
Neither shall nor can I ever forget,
For, as a father would a son beget,
Through things in life that come and go.

I wish to live for myself as both,
Looking at the world through a child’s eyes
Each day, bound by a pious oath,
Till the Man in myself grows old and dies.

A payable debt
There he is now, left like
A scar from another r scar torn,
As out of a life alike
Another life was to be born

That remembered the grief
It had swallowed in the womb,
For which there shall be no relief,
Except in the darkness of a tomb.

The sun will rise and shine
To see in his heart a total eclipse,
All sweetness to be tasted fine
Leaving a bitterness on his lips,

And flowers will bloom beautiful,
Striking his heart as so painful
Who dreams a vision wide-awake,
As they do in memory of life’s sake.

Were he ever to be cursed to never die,
Eternalizing the short while he is to stay
On Earth, then, till after all the oceans dry,
His journey to haven would be without day,

As he will break his own heart,
Breaking every wave
Of tears, for the remaining part
Of his life another life gave

That did bear a seed of pain
Not at all in vain,
For it knows all sane
Now it must bear its own pain,

There being no way on Earth to drown
His undying grief, as in the abyss of death,
Once the water breaks that does not drown
But lend him a life, yet as a payable debt.

Alone with Dead Friends
A tribute to Charles Bukowski

I remember myself kind of hibernating
In a light-famished semi-basement room,
Half buried alive, incubating
No hope of any season for my youth to bloom.

Being a little bit of penniless, helpless and restless,
Basically, a little bit too much of everything meaningless,
I crowded my little space applauding with loneliness,
Flooding my dried-up soul with nameless sadness.

Coughing, and dying in dreams several times at night,
Yet, with something inextinguishable inside of me,
I kept the fire alive for myself to continue to be,
Like an old dragon in a dungeon dreaming of flight.

Composed by Bach, Beethoven and Brahms,
And I did my best of Carpe Diem
In their intangible comforting arms,
While listening all day long to his Requiem.

I was with him along the Path of Passion,
Ashamed of my own cross to carry in my fashion,
And his voice I could hear in Missa Solemnis
Singing in the choir to wake my soul from darkness.

Little with them did I have in common,
Who spoke to me in a foreign language,
Except that after all we are all human,
Each going through their own rites of passage.

I don’t mind my mind sometimes stealing into that place,
Where I lie down with my young self in those old days,
Like a soul after resurrection missing his rebirth-place,
Where only those dead’s company gave him any solace.

To a Fly: A Corpse-flower for the Lord of the Flies
A Tribute to William Blake

Toward the moment time only flies
When I shall bloom a corpse-flower,
Then, Baalzebub, the loathsome Lord of the Flies
Will play some dirty tricks in his gloomy power,

Sending a swarm buzzing to claim and demand
My soul he wants stashed away in the stinky land,
Where the condemned culled from the deceased
Shall suck up to the kingdom of the diseased.

Oh, what a messy and nasty mate
Who breeds and breathes in love for odor!
It is with my soul that I hate
You, for it aspires for spiritual splendor,

But, though my shell may drop dead like you,
Hopefully, my soul shall be able to fly like you
Away to somewhere away from anywhere sordid
Where you were spawned with desires so morbid.

Detached and dispatched, may my soul
Light upon an eternal flower for its goal,
As a butterfly just hatched would be matched,
Not, like a gnat, by a doomy hand snatched!

Which is why I catch and release you from captivity
Out of pity for such a wicked and winged insect
That you are, for, in the eye of the blind eternity,
We are equally short-lived, and I know it for a fact.

Kihyeon Lee is a poet from Jeonbuk Province in South Korea. He studied German Literature and his English is mostly self-taught. As a writer, he hopes to capture the emotional journey and beauty of humanity through a personal perspective. When he isn’t writing, he enjoys sauntering in the mountains and listening to classical music and opera.