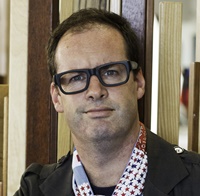 “So was Lucy there tonight?”

I was driving Finn home from Irish dancing.

“Oh,” I said. I was disappointed. Lucy was a friend Marla and I were actively courting for him. “Why not?”

“She can’t do the single reel and she’s triggered.”

I blinked. That wasn’t a word I expected a six-year-old to use. “Triggered, huh? Can you use that word in a sentence again?”

“Sure,” said Finn. At that age I guess he was habituated to people interrogating his use of language. “When I bite into a hard apple I get triggered.”

We’d reached the top of the sandstone stairs now. Two paces ahead he turned to me, his face a blaze of triumph with the porchlight shining behind him like a parodic halo. “When you tell me not to use the word triggered you trigger me!”

Onnie was on the deck ready to greet us. Her full name was Henrietta – a name I had given her based on a complicated, and erroneous, reading of her breed’s relationship to history. She was a cavoodle – a mix of a cavalier king charles spaniel – named after King Charles I – and a poodle, a French dog. King Charles I had a French wife, Henrietta Maria of France. Each marriage a mixture of breeds.

I’d been wrong on two fronts. The cavalier king charles spaniel was actually named after King Charles II. And poodles weren’t French, or at least not definitively so. They were probably German, bred to be ratters.

Names stuck, but everything else was transient: facts, history. Meaning slipped off like rain running down an oilcloth. Even her nickname, Onnie, was elusive. Bonnie? people would say.

I’d been listening to Disintegration Loops by William Basinski. An experimental composer born in Texas, he’d eventually ascended to New York. In the 1980s he recorded stuff from shortwave radio and other sources, then decades later when he tried to digitize it, the silver from the magnetic tapes flaked off as it passed the tape head. He just let it play and captured it. Static. Scratches. A shimmer.

It sounded like the world for all heart pulses breaking down. A memory on rotation.

“Shoes off,” I barked to Finn.

I hurried him inside. The heater was on. I had a headache. In fact I’d been waking up every other morning with a tight ache that clenched around the back base of my skull for weeks now.

Later that night I cracked and took the Diazepam Marla offered me. I looked it up online after I’d swallowed it. It was used to treat anxiety, alcohol withdrawal and seizures. If anything lately I’d decided, after a life lived under the illusion I was relaxed, to lean into my anxiety. It was certainly the condition of the age. As to alcohol I had no plans to withdraw any time soon.

I plied the top of my neck with my forefinger and thumb.

“It won’t take the pain away,” Marla said, “it’s just that you won’t give a shit about it any more.”

Our younger son, Tigg, appeared in the bedroom.

“When I grow up I don’t want to be a man,” he declared. He had his pyjama bottoms hitched right up.

He nodded. “I’m going to be a zombie and live in a graveyard with the other zombies.”

With that he retreated back to his room. Then he stopped and turned to us once more. “But not for a while. I’m going to live with Mummy and you till then.”

He scanned my face for approval. I must have signalled something because he seemed reassured and trotted off.

Marla was the opposite of reassured.

“You never should have shown him Thriller.”

It was hard to argue with her, but I tried. “You read him monster books.”

“They’re age appropriate,” she said. Her voice dropped into a register she reserved for the truly stupid.

Sometimes I went through the motions with her, putting up feeble counterarguments. I don’t know why. Maybe I had a masochistic bent too green for pants down and whips but eager enough for a tongue-lashing or its common cousin derision. It was equally possible I had a sadistic bent and wanted to frustrate Marla and provoke her into thinking she was shackled to an imbecile.

Tigg’s fascination with monsters had been nascent for over a year but had really developed over the last couple of months. As with everything to do with my children I figured the predilection was beyond my control and that all I could do was channel it. He did the same. If he woke up more frequently now, claiming he was scared Greenie the Zombie was coming through the window, who was to say even without the literary ground of the monstrous he wouldn’t have woken up anyway and attributed it to something else? Perhaps if he was obsessed with birds he would have woken up at midnight claiming an owl outside was keeping him up.

When I drove Tigg and Finn home from childcare and school, there was an unwritten schedule for the music on in the car. Each of us got a turn, turn and turn about. Three adamants, each in his own seat. Finn usually requested Irish music, sometimes hip hop, sometimes Michael Jackson. I’d made a playlist for Tigg called Monster and Creepies. From that he usually requested Thriller, Ghostbusters or I was a Teenage Werewolf by the Cramps. Lately in the car I’d been almost exclusively listening to 1970s and 1980s punk and indie. My tastes were becoming narrowed to the essential. I’d joked to my friend Yani that I’d stopped watching TV, was listening to only righteous music, and that soon I’d probably give up masturbation and live on air and moonlight.

The next day it was my turn. The Meat Puppets were playing. It was Buckethead.

The pace was truly upbeat. Jangly guitar lines. Slightly flat tone to the voice. Kirkwood had no time to pitch up to the imaginary spirit level of 1985.

“Is Buckethead a monster?” asked Tigg.

“Monsters aren’t real,” said Finn. Tigg and I ignored him.

“He has a bucket for a head,” giggled Tigg.

“That seems clear,” I said.

Finn saw it now. “Yeah and he walks around with it.”

“And he comes up to you,” added Tigg, “and tips the water in it all over your face.”

“Oh no!”  I said. I slowed down as I approached a roundabout.

“And it makes your eyes sting,” cackled Tigg. “Oh no,” he squealed, covering his eyes.

I beamed. Tigg was inventing monster lore. This was childhood heartstone to me, something I was very comfortable gathering around.

People in the Middle Ages had loved bestiaries – compendiums of beasts, some real, some mythological. In a way they were like children, swept up in rumour, grasping at facts from far-off lands, mesmerised by images. The ant-lion: the progeny of large and small. The bonnacon – a bull that shoots shit at you. Helpful creatures like the caladrius, an all-white bird that lived with the King. If it looked into the face of a sick man he would live, if it walked away he would die of his illness. You would pray it would look at you, for then it would draw your sickness into itself, then it would fly away, up to the sun, then sickness would be burned away.

The wish fulfilment was charming. There was also a logic to it. Sunshine was good for you. Ascension was desirable. And the drawing out of sickness from another, the taking it on, an image saturated with the idea of Jesus, reminded me also of myself as a parent in my best moments.

What chaos was Tigg referring to in his own life through this beast, Buckethead, who tipped his own cranial filth into the eyes of others? Was I Buckethead? Did I blind the vision of my children when I dumped out my mental slosh through those outbursts of temper?

There was no use. I joined in.

“Buckethead sits in a river,” I said, “and draws up the dirty water through his bottom. That’s how he fills his bucket.”

There was unshackled laughter from the back seat. This was the kind of mental filth that was actually cleansing. Healing.

“No wonder it stings your eyes,” said Finn.

“Daddy,” said Tigg. “When we get home can you bounce on the trampoline with us?”

Sometimes I was on the upswing, other times on the down. Today I felt capable, viable. There were other days, or parts of days – I called them Awkward Event Horizons – when I felt marooned in space and time. It felt unnatural to have a body, to move left knee and left ankle in concert, to have thoughts and motivations, shift mind, witness other.

As we went up the stairs, Finn chanted a rhyme that came from that peculiar child world – perhaps picked up from a friend, perhaps from school.

“First is the worst, second is the best, third is the one with the golden chest.”

Tigg was ahead of Finn and me. At this chant he turned around, panicked.

“Relax,” I said, and began to push forward.

Group order had been established on previous recitations. Finn, as eldest brother, would be second, which granted him superiority. Tigg had laid claim to the golden chest. As father I would take on the burden of being the worst, which meant I had to reach the top of the stairs first.

There was a jostling as I pushed past the boys and began to manhandle them into the correct psychological positions. It was an interesting moment. Finn, fleetest of foot, naturally competitive and keen to get to the backyard was resistant to relinquish any advantage. But he knew, he knew he was the best.

Tigg was beginning to lay claim to the chest, declaiming. “I have the chest,” he said. “I have the golden one. I’ve always had the golden.” His fists were clenched. Would I fight him for it? What hero or villain would arise?

Irrelevant, I wanted to shout at him. The chant was clear. History was meaningless. Things dropped away. Reality was material. If I didn’t get to the top of the stairs first, someone else would be the worst, one of them, one of the boys. It could not be allowed to happen. The reverberations would last an hour or more.

There were seventy-two stairs from the driveway to the house. I was forty-seven. I had drunk two mojitos the night before. The mathematics was not favourable. I blinked and the stairs swam. This was what fathers did, perhaps, throwing body and dignity into the furnace, asking no thanks. I was selfish. What spring did I have left in me?

Of course I made it up first. The drama was a game. I took a shuddering breath.

Tigg swung on my left leg and Finn gave me his bag to hold.

“Trampoline!” they cried as one.

David Leys is the author of The Institute of Fantastical Inventions and its sequel The Institute of Fantastical Inventions II: Magnetic Attraction released by New Holland Publishers. He has had short fiction published in The Blue Nib. He lives in Sydney with his young family. His writing seeks to explore consciousness, mortality and family in a discursive style.