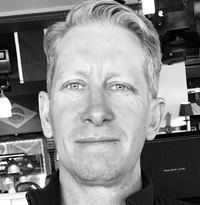 flanked by gums wanders through town

from high branches, rippling around

The bush spread to the reservoir’s

edge. Water stretched out of sight

round the peninsula. Wind-blown

waves chopped across to the distant

for skimming stones, sent them skipping

into the distance as galahs

squawked in the gums, shat from on high.

Snakes bellied through the undergrowth,

inside nostrils on sweltering

swoop and screech, the bush buzzes

picnic beside the lake, speed-

man mixing paint in the Ace