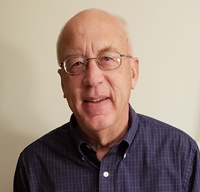 She seemed to consider herself an expert

after only donating one time prior,

and from the look that she gave me,

I definitely got the warning signal that it was

beneath her needing to review the advance

reading material on this visit to determine

if any important updates had been added.

hour by hour, or even day to day,

but some people have learned that not all things

in the world remained constant and liked to

keep informed, but unfortunately, not all were

as lucky as her, the expert Ms. Know-It-All

bursting with all of this superior intelligence and

keeping it all to herself, and even if she did want to

share a little bit of this knowledge, I knew I wouldn’t

great wisdom, though maybe I should have

been honored just to be in her presence, or at

least that is what I sensed from our brief encounter.

After years of always holding the blood drive

on a Friday, the day of the week was changed

to a Thursday hoping to get a few additional

employees to volunteer in donating since many of

them were now allowed to work from home on Fridays.

Yes, in theory, the change made sense, but it must

have also jinx the blood drive for a winter blizzard

to occur on the very first day of the change,

with a large percentage of the scheduled donors

failing to show up for their appointment.

I was use to observing them as they came through

the doors from outside from working on past drives

at this location, but few walked into the building today.

Blame it on the change of the day,

blame it on the weather,

an omen, maybe telling them that

some changes just weren’t meant to be.

As I laid on one of the beds in the

process of donating a pint of blood,

with a needle stuck in one arm,

she asked me if I wanted a juice or a cocktail

instead of asking if I wanted

some juice or a bottle of water.

I said yes, I would take a Bloody Mary,

but she rescinded her offer on the cocktail

after realizing her mistake, and I ended

taking her up on a can of cranberry juice,

the closest thing resembling the color of the

Bloody Mary that I had earlier requested,

trying to make the best of the situation

from my latest disappointment in life.

Visitor for the Day

I signed in at the front desk,

first typing in my name into the computer,

then took two steps back

as it snapped a picture of my face that

would be printed on the visitor badge I

was advised I was required to wear at

all times while I was in the building.

Besides asking my name,

the computer only asked who I was seeing,

but it did not ask the reason for my visit,

and I guess I should have felt fortunate

a brain scan wasn’t required to siphon any

remaining memories that were stored in my head,

or swabbing my cheek to obtain my DNA,

or taking my fingerprints for further verification.

I was just visiting there for the day, but felt my presence

was made more important than it should have been

by requiring my name and taking my picture.

I would have been happy just to have

remained as being someone unknown,

a status that would return as I left for the day.

Duane Anderson currently lives in La Vista, NE, and volunteers with a non-profit organization as a Donor Ambassador on their blood drives.  He has had poems published in The Pangolin Review, Fine Lines, Adelaide, Cholla Needles, Tipton Poetry Journal, Poesis Literary Journal and several other publications.