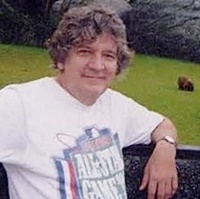 WILDLIFE IN THE WARD

I approach the dying man
like he’s a poisonous snake.
One step forward.
Half a step back.
He’s coiled up on the bed,
his breath the only thing moving.
But he could strike at any moment.
There’s nothing more toxic than grief.

I’m here out of duty.
The doctors give him days.
His mind has him
already dead and buried.
But I don’t trust a wounded creature.
I have a fear of ending up just like him.

He makes a sound.
His eyes open.
He turns toward me.
So weak, so pathetic,
not a snake at all.
A dying man is more like
a frightened lapdog.
I can deal with one of those.

IN THE YEAR OF HITCHHIKERS

A hitchhiking woman got into my car, twenty five I’d say,
face on the cusp of pretty to hardness, she talked a lot,
I listened and drove, her life story, just about every moment
leading up to where she was now, like one of those movies
told in flashback, wretched home-life, crazy boy-friends,
drugs and booze, abortions, and a one year stint as singer
in a rock band though, in her words, “I couldn’t sing for shit.”

That’s it, forget her name, remember the details, no not even
that but the telling of the details, how they replaced the miles,
the landscape, for a time, no longer boring but pulled together
from a heroin habit she kicked and a taste for broken men
she never tried to, but eventually, even the sordid chapters
of her being became predictable, monotonous, until her
voice was flat land, her adversities were wheat-fields, the
needles sticking from her arm were just a string of silos,
and the sex, the intimate aspects, no more alluring than the
distant farmer in his harvester churning up the soil.

A red-winged blackbird
floats on the tip
of a wind-rocked cattail.

Canada goose,
loud poignant honk,
whither the rest of its flock?

All is budding, or gathering,
or swooping on insects,
or disappearing
like the white deer rump
in the clump of pines.

It’s small on the map,
it’s unspectacular
in the scheme of splendor,
but I can have it any dusk
I choose.

For it’s just a short walk
from the cabin
Is your God
a short walk from your cabin?