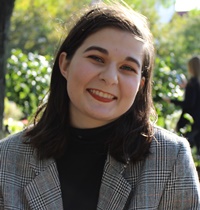 It was June and Auntie Mabel and Uncle Jim had come up from Alabama to visit for two weeks. With them came George, the youngest cousin, my favorite person. He was easy to bully, quiet, and immature, which I took full advantage of. George was small and sickly, his posture always bad, ashy blonde hair constantly sticking up and ruffled. His mother, Auntie Mabel, always believed that the Maryland air was better for him during this season, as his asthma usually flared up around this time.

I think my bond with George started when I saved him from drowning in the Chesapeake two years earlier. He never learned how to swim, always begged for lessons, but we often ignored him. Since then, whenever Auntie and Uncle brought him up for their annual trip, he always stuck to my side. “Janie,” he’d always say, “don’t leave alone.”

On the day of the eighteenth, I was left in charge of George. We were sitting in the reading room, playing Monopoly, when Momma entered. “Jane,” she said, opening the curtains next to us. The sunlight bounced off the mirrors and created rainbows across George’s face, which he smiled and waved his hand through. “We’re all go to head to the market real fast. It’ll only take thirty minutes.” I nodded, rolling the dice again. Three. I moved onto Free Parking and George huffed, crossing his arms.

“How come you always get that?” He whined, grabbing the dice.

Momma smiled as she left, calling over her shoulder, “Jane’s never lost a game of Monopoly!” George frowned and swept his hand across the board, knocking the pieces over.

“I don’t want to play anymore!”

I felt a stab of irritation. “Fine.” I snapped back at him, aggressively slamming the game back into the box. “I’m going to go sit on the balcony, you go do whatever you want.” His lip quivered, his eyes large and full of tears, but I didn’t care. I went over to the white ornate French doors on the other side of the room and sat on the ledge of the wooden balcony. My heel scraped against an exposed edge of wood and it began to bleed.

The balcony overlooked Momma’s pond. It was Momma’s pride and joy, the most cared-for part of the estate. Lily pads were scattered across the dark water, frogs and toads lingering on the edges. Orange and black koi nipped at the surface; it was almost time for them to be fed. Handfuls of water lilies were scattered across the water, slowly bobbing with summer’s breeze, and bees flitted from bud to bud.

I heard the doors open behind me, then slow, deliberate footsteps. “Janie?” George murmured. I turned to look back at him. His bangs were falling over his face messily and he had his arms crossed behind his back. “I’m scared.”

I sighed, then patted the ledge next to me. “Come sit here.” He shyly nodded, then hoisted himself onto the ledge. We sat in silence for a moment, with George twiddling his thumbs and I blankly staring into the murky water. The koi had dispersed, the water now calm, too still. My heel began to sting and I looked down. The blood was now dripping.

“George, you can stay here, my ankle’s bleeding.” He looked at my foot and his eyes went wide.

“Okay.” He whispered, the twiddling gaining intensity. I felt guilty leaving him alone, but I felt as if my wound needed to be attended to. I swept through the halls of the house, opening closets, searching for bandages or a cloth to wrap around my foot until Momma got home. I found the bandages in the kitchen, which was on the other side of the house. I put my foot in the sink, running water over it, and watched the pink streams cascade down the drain. A small wood shard was embedded, so before dressing the wound, I had to get that out.

It took me twenty minutes, and in that time, I had forgotten about George. The house was quiet, not a voice to be heard. The balcony was empty when I came back.  “George?” I called out, leaning a bit forward, peering into the pond. I thought I saw something move in the far right corner, a ripple, but it was only a frog leaping onto another lily pad. Where was he?

I went back into house. I hadn’t seen him since I left him alone. Panic ripped through me. “George!” I called out, running from room to room. I slammed into a pillar, falling backwards. No movement could be heard. The house was too still. Too quiet. George was gone.

It took us three days to find George. No one had ever taught him how to swim, so when he fell off the balcony that day, he drowned. He never called out. I imagine his lungs filled with water before he could, or, maybe, he was just too quiet. His body was found floating, all bloated and lifeless. Auntie Mabel and Uncle Jim had him buried here, then left. They couldn’t look me in the eye, give me a goodbye kiss.

Momma closed up the pond two months later. She’d begun to neglect it since George’s death, and the lily pads and water lilies had shriveled up under the summer heat. The koi had stopped eating their food. There was nothing left for us but grief; the beauty in our home died. We moved that fall.

Ashley Hajimirsadeghi’s work has appeared in, or is forthcoming, Into the Void Magazine, Rust + Moth, and The Shore, among others. She is a poetry reader at both Mud Season Review and Ex/Post, attended the International Writing Program’s Summer Institute, and was a Brooklyn Poets Fellow. Her website is http://ashleyhajimirsadeghi.squarespace.com/