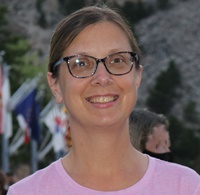 The sky was purple and pink, a faint glow started in the horizon. Subtle and warm like the feeling that spread in her chest. The little girl focused all her concentration, determined not to miss The Moment. Her favorite moment. She blinked. Suddenly the horizon glowed orange and yellow and the clouds looked like red fire. Something blazed inside the little girl. There was no way she knew to describe it. Just a feeling like flying and being stuck all at the same time. It smarted behind her eyes and caught in her throat and thumped in her stomach. She wanted to be up there. With the clouds and the sky and the glowing sun.

“Majestic, isn’t it?” Mommy’s voice sounded from the bed.

Skye didn’t know the word majestic, so she offered her own word even though it didn’t seem to be enough. “The sky is so pretty.”

“Yes, it is, darling,” Mommy pulled her gently away from the window and back into bed with her. The little girl could feel her breath move the strands of hair that came out of her braid while she slept last night. Mommy held her close and Skye breathed in Mommy’s usual scent of cigarettes and rum and flower shampoo. “The sky is as big as the whole world. Just like my love for you, Beautiful Skye.”

Skye wiggled around Mommy to reach for a glazed donut from the box she saw Mommy carry in this morning. She pulled her hand back in disappointment when it encountered an empty box. Snuggling back under the covers, she swallowed the lump in her throat. She’d been sure Mommy had brought home six donuts. She’d counted them in her head. Counting to six was easy. She counted to five on the fingers of her left hand and then the pointer finger of her right hand got her to six. Actually, she could count all the way to twenty. That was easy and she was the only one in preschool who could do it. Mariah said that she could do it, too but Skye knew better. Mariah was a show-off.

But now there were no donuts. Mommy had eaten them all. Even though Mommy’s love was as big as the sky. Sometimes it was like that. Mommy would be so hungry she would eat everything in sight. Other times, she would sleep through meals and Skye ate Goldfish crackers and cheese sticks for dinner.

Mommy’s body leaned heavily against hers. Looking at the clock with the big green numbers, Skye saw that it was time to leave for school. When the first number read seven and the next numbers read three and zero, it was time to go and Mommy would rush them out of the apartment and down the stairs. But Mommy wouldn’t wake up, so Skye picked up her backpack and trudged down two floors to Mrs. Rogers’ apartment.

“Your Ma passed out again?” Mrs. Rogers was a square shaped lady with a soft flabby face and messy salt and pepper hair. One eye didn’t open all the way.

Skye felt funny in her stomach. She didn’t want to say that Mommy had eaten six donuts without leaving one for her. Or that Mommy hadn’t been home last night, and they were out of Goldfish and cheese sticks. So, she looked at her sneakers, focusing on the big toe on each foot that poked out amid the sparkly rhinestones.

“Here.” Mrs. Rogers handed her a package of Pop Tarts. “Eat these on the way.”

Skye didn’t like Pop Tarts, but she said thank you anyway. She nibbled on the crumbly sweetness while she waited for Mrs. Rogers put on her jacket even though it was summer and explain to Mr. Pudgy the cat that she would be back soon. She dutifully followed Mrs. Rogers down the stairs and out into the faded yellow morning. The street was heavy with morning traffic. Bicyclists dodged around them on the narrow sidewalk. A lady pulled all six of her dogs away from Skye who giggled. Mrs. Rogers grumbled the whole way about parents these days not raising their own damn kids. Skye knew she didn’t mean it. Mrs. Rogers spent her days watching game shows and clipping coupons. When Skye stayed with her after school, she always had snacks for her and listened to her stories.

Skye kept her eyes on Mrs. Rogers’ faded red fleece with holes at the seams until the familiar sight of her school diverted her. She hoped there would be apple juice and graham crackers for morning snack. Maybe they would play parachute and get to work with paints. Mrs. Rogers signed her in and tousled her hair by way of good-bye.

She was waiting for Skye after school. Skye had so much to tell her. Mariah had licked the glittery glue right off the kite she was decorating for the classroom. Rainn pushed her too hard on the swing and she fell off. She proudly displayed her bandaged elbow to Mrs. Rogers who barely gave it a glance. Then during parachute, she’d accidentally hit Carson in the face with her elbow. Teacher made her sit out; it wasn’t fair. Met with Mrs. Rogers’ silence, she stopped talking and followed her faded fleece all the way home.

There was nowhere to sit in Mrs. Rogers’ apartment that wasn’t covered with Mr. Pudgy’s fur. Like morning frost, the remnants of his white coat blanketed the furniture and carpet. Skye chose to sit on the corner of the couch, away from the part with a dark stain on it. She watched as Mrs. Rogers pulled a Lunchable out of the fridge and brought it to her. Then sat silently on her faded brown easy chair with worn arms and turned on a game show. It was as strange gameshow, everyone got excited and laughed about things that Skye didn’t understand. There should be a gameshow where teachers played parachute and kids got to make them sit out when they made a mistake.

They sat for a long time. Skye watched the outside light fade. Mrs. Rogers nodded off. Her soft snores matched the rhythm of Mr. Pudgy’s swishy tail as he strolled by. He turned and gave her a look. Just like Mrs. Rogers, he only had one good eye. Skye slid off the couch and followed him to the sliding balcony doors. They faced a different direction than Mommy’s apartment so Skye could watch the sun go down.

She slid the door open and then closed it behind her so that Mr. Pudgy wouldn’t escape. Once she’d forgotten and Mrs. Rogers had yelled something fierce when she caught him walking the edge of the balcony like a tightrope. The city stretched before her. Buildings rose like jagged silhouettes against the yellow, orange, and pink horizon. In the distance, she saw a beautiful shape like the wing of a bird. It rose from the bridge. It must be what Teacher had called a sculpture in art class last week when they used bendy straws and pipe cleaners to make models. Mr. Pudgy had stepped on Skye’s before she could show it to Mommy.

Skye pulled herself up on a cracked green plastic chair. She raised her arms up over her head, bent them at the elbows to mimic the curve of the bird-wing sculpture. It looked so lovely against the sky.

“What are you doing? Giving me a heart attack. You wanna kill me? Get down from there!”

Skye stumbled off the chair and Mrs. Rogers screamed.

Skye slunk back inside, and Mrs. Rogers gave her a hard swat on the rump as she followed her in.

“Serve you right for scaring me like that. Least you had the sense to keep the cat inside.”

She sat quietly at the sticky kitchen table and watched as Mrs. Rogers cooked dinner. Grilled cheese. It was burnt on one side.

“You head on up to your ma’s, now. You can be her problem the rest of the night.”

Skye left without a word. Guilty about upsetting Mrs. Rogers. Sad and empty that she couldn’t soar against the orange sky. She wondered if birds ever got close enough to touch it. If she were a bird, she would find a way. A way to be a part of something so big and wonderful.

The apartment door was open a little, so she tiptoed inside and closed it behind her. There was no Mommy in sight, but Skye knew she was home. Her hoodie was crumpled on the couch. Mommy was like Mrs. Rogers, always cold even in summer. She could hear heavy whispers and rustling sheets. Peeking inside Mommy’s room, she saw her in bed with a man who Skye had seen before. He had brought McDonald’s for Skye once. They weren’t sleeping and Skye watched for a while, curious, until a shoe flew at her from that direction sending her running back to the kitchen.

Skye decided that he wasn’t nice. Just like the one before him who sometimes brought flowers that made the apartment smell pretty. After Mommy got a black eye and broken shoulder, she wouldn’t let him come back anymore even when he pounded at the door and yelled about being sorry.

When Mommy had a man over, Skye had to sleep on the couch. Even if she was scared or couldn’t find a blanket, she wasn’t to bother Mommy when she was having grown up time. That was the rule. She picked Mommy’s hoodie up and wrapped herself in it. Part of it smelled like flower shampoo.

She woke to the sound of voices in the kitchen. Mommy and that man were in the kitchen standing close together, giggling and blowing smoke in each other’s faces as they took turns smoking.

It smelled like a skunk. Skye didn’t know what a skunk smelled like but she’d overhead one of the neighbors complaining to Mrs. Rogers about the smell once. The one with the shiny bald head, leathery skin, and bushy moustache. He never smiled. Funny how grown-ups didn’t smile very much. She wondered if he’d ever seen an orange and pink sky or seen the clouds on fire with morning sun. Probably not, otherwise he’d smile more.

Mommy wasn’t giving her any attention, so she crept to the bedroom to watch the sky change. It couldn’t possibly be as—what was Mommy’s word?—majestic as yesterday. Sunrises couldn’t be that way two times in a row.

But as the colors changed, that weird feeling moved inside her again. A pull to be with the birds, to be close to the sun and the sky. To wrap her arms around a cloud. Then she remembered the sculpture that she saw last night rising from atop the bridge.

She turned around. No one was watching. She wouldn’t be in trouble if she tried just one more time.

She balanced herself carefully on a broken bench near the edge of the balcony and raised her arms like the swooping wings of the sculpture. She stretched higher. And higher. She was doing it! She was a bird in the sky.

Cathy Carroll-Moriarty lives in Nebraska. She loves a good book and a glass of wine by the fireplace or while enjoying an autumn sunset. Her short story “October” recently appeared in Ariel Chart.