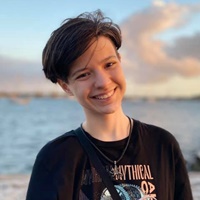 Will and Dawn stared at the red button installed on top of the white pedestal.

“One of us has to press it,” Will said, although he makes no move to step closer to the button.

“There has to be another way.” Dawn fiddled with her press badge as she scanned their surroundings for the five hundredth time in the past ten minutes since they first entered the room. It was just them, solid concrete walls, and the button.

“The doors are electronic and deadbolted, and we can’t open the vent-” her friend pointed at the small vent on wall next to the door. “There is no other way out. Professor Craven told us that if we want to open the door – one of us needs to press the button.”

“Even though he said that one of us will-?”

Will interrupted her, and she didn’t want to say the word as much as he doesn’t want to hear it. “Maybe he’s trying to test our self-preservation instincts or something, and this all a social experiment. So that when we press that button, the doors will open, and he’ll be like ‘Surprise! This was just a test!’”

“Professor Craven is an engineering professor working on a new type of capital punishment that’s supposed to make it more instantaneous and cost-efficient than what the state is currently using.” Dawn wrinkled her nose and cursed her newspaper editor for giving her this assignment. “I’m not sure why would he put us in a social experiment instead of trying to defend the need for a new form of death penalty.”

“Well, why else would he do this?”

“I don’t know, but you’ve heard the rumors about him.” The rumors of Professor Craven’s less than ethical experiments involving unexpecting students and forcing them to interact with his inventions until they get the results that he wants, or they need to be hospitalized. But the only sources for those stories are two decades old and on a defunct conspiracy forum; no one in the school’s administration or student population has evidence to prove them true or false. Dawn had scoffed when she heard those stories, but she’s more flexible in her beliefs now.

“No one’s been able to prove that he did any of that stuff, and here I thought you were all about debunking falsehoods, journalist.” Will crossed his arms.

“Well, it certainly feels like we’re in a situation that proves those rumors right.”

Will pursed his lips. His brow furrowing as he thought of something. “Wasn’t Remy supposed to come with us?”

“He was supposed to come in with us, but he was running behind. He just told me that he was having problems with his camera and to go ahead with the interview, but he would catch up with us before we left to get a picture for the article.”

Will’s eyes suddenly widened, and he rushed towards Dawn. He grabbed her arms. “Dawn, Dawn,” he repeated her name, and she just raised an eyebrow. “I know a way that could result in both of us leaving.”

“We could just wait for Remy to rescue us.”

Dawn pulled his hands off her. “I don’t think that’s going to work.”

“We don’t know if opening the door from the outside will have consequences – for us, or for Remy.”

Dawn didn’t want to agree – all they would be doing is delaying the inevitable. Someone will be pressing that button, and she didn’t want to think about who was going to.

They stood in uneasy silence. Eventually, Will started circling the button with a vulture’s glare as if he could somehow find a hidden escape button on the plain white pedestal. Dawn paced back and forth, glancing at her friend as she did so.

“Remy’s not coming, Will,” Dawn said, strained. She crossed her arms and clutched at her sides as she still stared at the button. “One of us has to leave this room.”

“I’ll do it,” Will said, planting his feet on the ground.

“But I’m the reason why you’re here in the first place. You shouldn’t have been here.”

“Dawn, out of the two of us, you’re the one who’ll be able to break the news about whatever Professor Craven is doing here. You need to be able to leave.”

Dawn looked up at Will. She nodded at him, and Will stepped forward, avoiding the crop circles, and into the white square at the base of the pedestal. She hovered her hand above the button and closed her eyes to keep her from making a mistake. She forced her hand down the remaining half-inch. Her palm curved with the red plastic cover, and the metal base pressed into her hand. She heard the door open but she kept her eyes closed, not wanting to face whatever the professor made them do.

Her eyes shot open as she snapped her head up.

Will was still standing – alive. He stared at her with similarly large eyes.

“I guess you right that this was just some kind of an experiment.”

Will didn’t reply. His eyes welled and his chest heaved before his face hardened. He balled up his fists and turned on his heel and marched out of the now open door. He turned and paused – staring at something on the floor.

“Dawn,” Will said as if he was being strangled. “You might want to check this out.”

She ran out of the room, not wanting to risk being in there for another second. She skidded into Will, who didn’t even budge.

She saw an identical red button on the wall before she looked down at what Will was staring at. She gagged and her eyes watered as the burnt smell sunk into her nose.

Remy had found them.

“We need to go,” Dawn said. “We need to stop this from happening ever again.”

Dex Campbell hails from the rural suburbia of Navarre, Florida. She studies creative writing at Full Sail University. Follow her on Twitter @Overgravity.