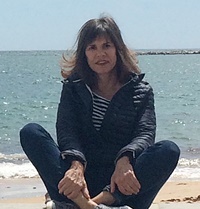 I enter the small jewelry shop in our little town.  There are two or three people ahead of me, hunched over the glass counters, perusing the gold pendants and rings and other assorted jewelry on display.  The jewelry and silverware on offer in this dusty shop are antiquated and tarnished; this little shop has been around in Monte Estoril for forty years.  As I wait my turn to have a watch battery replaced, two photographs catch my eye.  They are displayed in the tarnished silver frames that are also for sale. One shows an ensemble of people, a tightknit group – no doubt the family members of the shop owners, long since deceased.  But my gaze is drawn to the second photo: three people against the background of a field covered with shrub-like growth.  The photo is old and discoloured.   I make a mental calculation: it was taken during sometime during the Salazar era, when the majority of Portuguese lived in extreme poverty, cut off from the rest of the world.  In the forefront I can make out two figures, hats atop their heads.  They seem to be crouching, but I cannot be sure.  The photograph is too old and faded.  Two of the figures appear to be women. Standing behind the two women is a young man in a white shirt and light-colored trousers.  As the single person standing, he has the central position in the photograph.  He looks at the camera with an almost startled expression.  It is more difficult to read the expressions on the faces of the two crouching women, although the woman on the left seems to have the slightest hint of a smile.  My eyes are drawn again to the young man.  He is looking directly at the camera.  His face remains inscrutable as I attempt to decipher something about this person across the schism of time and history.  All I know is that his gaze is a gaze forward, into what lies ahead, into his future.  But it moves me profoundly, this gaze into what is to come, into a projected future which for me is already an moment in the distant past, a brief episode of cursory interest in a country that is still foreign to me, where even everyday objects are vested with a strange and unfamiliar allure.

The second photograph displayed in an ornate tarnished frame shows a young married couple.  The photographer has set the scene: the wife is sitting in a period armchair.  She wears a white embroidered dress, a large crucifix suspended around her neck.  Her husband is dressed in formal attire, a white shirt and white cuffs showing under his suit, his tie artfully arranged; he leans slightly to the left towards his wife, in a somewhat protective manner.  The photographer has provided a decorative pillar and a rug beneath the couple’s feet. The wife rests her right arm on the arm of the chair; her expression is simultaneously serious and serene.  But the protective figure hovering over her – his expression is quite different.  He too looks at the camera with a wide-eyed, somewhat startled look, as if caught by surprise.  In this way, and in this way only, he resembles the young man in the first photograph.

I have to admit that I am drawn to old photographs – not of landscapes, not of monuments, not of cities, but of people.  Nowadays I mostly come across them in dusty cardboard boxes at Lisbon’s biggest flea market – the feira da ladra.  I cannot decipher just what it is that I’m drawn to.  Interest in the past? Perhaps.  But there is more to it than just historical curiosity.

I am a bit puzzled as to why they perturb me so.  It is understandable that I find the poses assumed by the subjects or their clothing antiquated.  A fleeting moment in their lives has been captured by a person unknown to me, at a place and time unknown to me, and it lives on on a thin sheet of fragile plastic. These solemn faces staring unblinkingly at me from the past: they are telling me something about my own impermanence.   I feel this temporal dislocation between us – between myself and the yellowed photograph I’m looking at – and I feel the need to bridge it in some way. I feel that if we break our gaze, I will lose mysafe footing in the present.  These expressive faces of long ago, whose eyes have met mine by the merest of chance, are looking at their future, which unfolds as a bright endless expanse ahead of them.  What is our connection?  I am a trespasser, uninvited, encroaching onto this singular moment of their lives.  What exactly is my role here? To recognize this moment and thereby perpetuate its memory?  Or to renounce it, to deny its durability in time?  As an interloper who has entered their present, I know their faces will linger in the minds of those closest to them ever more tenuously until the memories themselves vanish with time and they are forgotten.  And this faded image in the corner of a forgotten dusty shop in Portugal will be all that is left of the fixed, intent gazes into the camera and beyond, into the future, an image destined to fade into oblivion and nothingness.

Anita Lekic has a B.A. and M.A. in English and Ph.D. in Slavic Languages and Literatures. She taught at the State University of New York at Stony Brook as an adjunct professor and later moved to The Hague, Netherlands to work as a translator for the UN War Crimes Tribunal.  Now living in Portugal. Publications: three essays in Counterpunch: Letters from Lesbos, Revisiting the United States after Twenty Years, and Notes on Depression, three feature articles in The Local Germany: How I Found Yugoslavia in a Small German Town, A Night in the Hotel that Used to House Some of Germany’s Most Wanted Outlaws, and How Kaiserslautern Continues to Integrate Refugees, and short stories in The RavensPerch, Streetlight Magazine, The Dark Ink Press, Typishly, Cagibi, The Bangalore Review and Wanderlust.