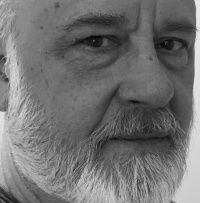 The express jet banked low over huge storage vats of crude oil that lined the chocolate brown river. Damian was headed home after twenty-five years. He called his sister, Toni from his cell phone as he walked through the jetway. She was to meet him at baggage claim. He hoped she wouldn’t cry. Damian knew that she meant well and loved him and had loved their father.

Damian’s sister greeted him with an awkward hug. Just six months earlier she attended his wedding in Chicago. It was his third marriage.

“You feel skinny. Have you lost weight?” Toni wiped a tear from her cheek.

“You always ask that.” Damian kissed his sister.

It was getting dark and Damian tried to get his bearings while his sister drove. They crossed the Huey P. Long Bridge and he looked out over dark water.

“Huey Long, Kingfish of Louisiana,” he announced with his affected drawl.

“You remember the sugarcane?” Toni asked.

“I remember snakes in the cane. That old man used to pay a quarter for a snake. I imagine he ate them.”

“I reckon so,” Toni sighed. She was tired of making all the funeral arrangements and decisions and felt that Damian should have helped. She scheduled their father’s memorial service for the next day. The father requested his ashes be scattered in False River Lake. Damian and his father used to fish there when Damian was a boy. “Were they poisonous?” Toni asked.

“Red bellies, browns and kings mostly. No poisonous ones I remember.” Damian adjusted the seatbelt over his shoulder and turned his head to the backseat. “I put my suitcase in the trunk, didn’t I?”

“I watched you throw it in the trunk; you slammed the lid.” Toni smiled for the rear-view mirror.

land bordering sugarcane fields just north of Baton Rouge. She lived alone after her divorce. Toni and Damian sat at the kitchen table and looked through old photo albums. “There’s not one picture of the old man without a cap. I used to think it was sewn onto his head,” Damian

said as he sipped bourbon and water.

“Dad was a good ‘ole boy if ever there was one.” Toni took a shot of bourbon. “Not many pictures of Mom,” she added.

“She’d get mad if you pointed a camera her way. She had a mean streak,” Damian said.

“Why did she hate you?” Toni asked.

“Why?” Damian waited for an answer as his sister poured him another bourbon and water. He hated the old guilt — it broke-up his first and second marriages. “Dad hated me too.”

“Mom made him hate you. I tried to talk to her about it once and she threw me out the house and wouldn’t speak to me for a year,” Toni said.

“We getting drunk?” Toni asked.

“Is that the way you want it?”

“All right.  Do you want food? I made red beans and rice.”

“The way I remember?” Damian asked.

“Sausage and hamhock. Ain’t no other way to make it.”

“Why couldn’t she forget it?” Damian asked.

Toni reached across the table and held Damian’s hand. She was nervous for the night and wanted it to be perfect as she remembered it was when they were teenagers. The urge crawled from its dark corner and stared at them with red eyes. When they had finished making love, the hunger retreated into the shadows and rested and they told each other things as if it would never return.

It was a humid night in the summer just after Damian’s high school graduation. Toni and Damian were on the porch asleep, holding each other. It reminded their mother of when they were children, sleeping together during the storms when the rain rattled the windows of their farmhouse and sounded like evil was trying to break in. Their mother sat all night at the kitchen table. The veneer of cooking smells covered the cherry wood counters that surrounded her. She passed the time until daylight recalling Bible verses she had memorized. There is therefore now no condemnation for those who are in Christ Jesus. She repeated that verse until the anxious thoughts left her. In the fresh light of the new day, she watched her daughter open the kitchen screen door from the back porch. Her mother could see that she was beautiful — a tomboy with muscular arms and shoulders. Her short, jet-black hair was all over her head. Toni, flushed with embarrassment, stopped suddenly in front of her mother. Damian followed behind her. Their mother never said a word. That’s when the hate started.

The memorial service was held at the Veterans of Foreign Wars Hall. There was a faint odor of stale beer and the wooden folding chair Damian sat on smelled as if it were coated with a fried fish varnish. He looked and felt out of place.

“That’s my one and only brother Damian sitting over there looking uncomfortable,” Toni said to the Catholic priest who arrived late to the service.

“I never had the pleasure of meeting your father. Can you tell me a little about him?”

The priest was earnest and young with dark eyes.

“Well Father, my Dad wasn’t religious. He loved my mother and worked hard all his life. I guess that’s what a father does – a not religious father, I mean. He loved to fish. That’s something you can say about him. He fished and had skin cancer on his head. You don’t have to mention the cancer part. His friends here, not too many left, his friends knew him as a guy who loved to fish.” Toni smiled at the priest and looked away. Damian was in the middle of a conversation with an old friend of their father’s.

“And your mother?” The young priest was sincere with the asking.

“She passed on ten years ago, Father.” Toni looked to the ceiling trying to think of something else to say. She recalled her mother’s face in the pristine light of that new day so many years ago. The heavy feeling in Toni’s legs returned. “She had problems.”

“She and my brother didn’t get along. I think she had mental health issues. Her father, my grandfather, killed himself when my mother was just nine years old. I blame it on that. I blame

the old hate on that, Father,” Toni said, avoiding the priest’s eyes.

“I understand. Forgiveness is most difficult, especially to forgive oneself. Most difficult.” The priest was pleased with his observation and proceeded to get everyone’s attention. He said some fast prayers and gave a heartfelt homily. He talked about how St. Peter became a fisher of men and how Damian and Toni’s father had gathered his friends around him in life as a fisherman.

After the service, Toni drove Damian to the airport. Damian noticed that she was running her hand through her short black hair and looking in the rear-view mirror. Her blue eyes darted from road to mirror, and they appeared insecure with the looking back.

“So, what did you and your priest friend talk about?” Damian asked.
“He wanted to know about dad — for the homily,” Toni responded.

“Did you tell him that you’re just another lapsed Catholic?” Damian asked. “You used to be such a good little Catholic girl. Loved that uniform you wore to school — that skirt!”

“Right! I’m sure you still go to church,” Toni said defensively, her legs felt as if they were being slowly buried in cement and a sour burn rose in her throat.

“Was it hard for you to walk away?” Toni asked.

“It was a relief to get rid of it,” Damian responded.

“The guilt. I wish we had more time — don’t know when I’ll see you again. You can always come to Chicago,” Damian spoke softly.

“I got too much to do here. How’s the new wife?” Toni asked.

“I told her about Mom and Dad hating me. She’s bored with the stories.”

“Does she know about the snakes?” Toni asked.

“You should tell her so she won’t be bored. Tell her about snakes in the cane and that old

man who used to buy’em.” She rolled her window halfway down and then quickly rolled it back closed against the syrupy Louisiana air.

“Maybe I’ll tell her that one. She doesn’t know anything except Mom hating me and making Dad hate me. She’ll think it’s a lovely story,” Damian said.

“Not if you let on it was my idea,” Toni said, forcing a smile.

“There are other stories you can tell her,” Toni said.

“How about my high school boyfriend, and how you beat him up.”

“He was a typical seventeen-year-old boy.”

“It’s sweet you being jealous.”

“You were jealous of my girlfriends. Remember your friend, Carol?”

“She was alot of boy’s first.”

“Stick with snakes in the cane. That’s a good story.”

“What’s she ever done to you?”

“She’s perfect for you – neutral as vanilla, stale as candy cigarettes.”

“You don’t know her. Come to Chicago.”

“I have too much to do here,” Toni insisted. She stopped her car at the departures curb.

“You can come to Chicago when it’s burning season.” Damian reached over and touched Toni’s cheek lightly with the back of his hand.

“I’m busy during harvest. You can come here for the fishing,” Toni said softly.

The burning seasons passed by one after the other, and Damian never returned to Louisiana. The burning always came before the harvest and drove snakes out of the cane. Smoke from the sugarcane fields made the hot air smell like a sweet incense of burned molasses. It was a good practice, done for centuries, and certainly a favorable beginning to an end.

William R. Stoddart is a poet and story writer who lives in the suburbs of Pittsburgh, Pennsylvania. His fiction and poems have appeared in journals such as The Pedestal Magazine, Adirondack Review, Ruminate Magazine, and The Molotov Cocktail.  Recent and forthcoming work is in Third Wednesday, Maryland Literary Review, The Orchards Poetry Journal and Crack the Spine Literary Magazine.