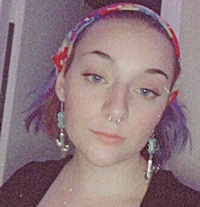 The world looks a little different when you’re dead. Colors are faded, and it seems like everything is a tiny bit lagged. Temperature and wind don’t seem to exist, and everything smells like pomegranate.

At first, when I died, I thought I was just half asleep. I couldn’t really interact with anything or anyone, but I was aware. The first thing I had seen was my mother’s tear-stained face and my brother standing at the foot of a hospital bed, the emptiness in his eyes so intense I thought for a second that I was imagining him. My dad was there, and he was crying. I didn’t realize what was going on until I looked at the body on the hospital bed and saw my own face, my own unnervingly still and disfigured body.

There was no bright light, no thundering voice, no ancestor calling me to the other side. There was just the sound of my parents’ sobs and the whispers between the doctors and my brother. It was not the way I had imagined death to be.

I followed my brother when he left the room, followed him out to his car. Turns out ghosts can sit in cars, and I went with him not knowing where we would end up. He drove to my best friend Elizabeth’s house. I watched her break down in his arms when he told her I was dead.

I had no sense of time, as the passage of days as I had known them was skewed now.

One day, everyone was getting dressed in black, and my mother was crying more than usual. When I got in the car with my brother did not turn on his normal music. He had my old phone, and he went into my Spotify and played my old playlists. The music was loud and the bass shook the car, like I used to play it when I went on drives with him.    He stopped at an old brick building, and as he turned the car off he reached for his wallet, opening it and looking inside. I moved to look over his shoulder at it, and saw that he had a photo of us from the year before tucked into his wallet. He wiped his face and went into the building, and this time I stayed in the car. He came back with a decorated jar, and I felt a very strong pull. When he got back into the car he opened it, and I realized that the pull I felt was because my ashes were inside the jar. He started driving again, until we got to the trails that we had walked together as kids. He got out of the car and took the jar into the woods.

I followed him for a long time, until we reached the top of a hill where our family and my friends were all waiting for him. Elizabeth had four cylindrical pendents in her hands which she dipped into the jar and filled with ash before sealing them. Everyone was either stoned-faced or crying as my mother delivered the eulogy, but I wasn’t really paying attention to what she said. All I could focus on were the faces of Elizabeth, Corey, and my brother. They had been closest to me throughout my mortal life and I could not tear my sight away from the broken expression on their faces.

My brother handed my ashes to my father, who I was startled to see. Tears fell from his face as he spread them over the ground, hesitating as the last ashes fell. It was as though he didn’t want to let me go. Eventually the crowd dispersed, and it was just my parents, Corey, Elizabeth, and my brother at the top of the hill. Elizabeth strung each pendant on a chain and handed one to my brother, and as he put it around his neck the tears finally came. He broke down in Elizabeth’s arms. Corey took hers, and said goodbye to my mother before walking away with tears in her eyes as well.

My father moved towards my brother, reaching for him, and I had never seen such fury erupt in Elizabeths eyes.

“Don’t touch him,” she sneered, clutching my brother’s shaking body.

“If I want to comfort my son, I will,” my father replied. “She was my daughter, I know what he’s going through.”

“You didn’t care about her. You left her when she needed you the most,” Elizabeth said.

“Elizabeth, stop it. We just laid her to rest,” my mother pleaded.

“He shouldn’t be here,” Elizabeth said, glaring at my father.

“I loved her, I would do anything to have her back. You have no idea how hard this has been,” my father said. My brother moved away from Elizabeth then.

“I begged you to make things right with her for years. You gave her permanent emotional pain. You don’t get to act like you would do anything for her now,” my brother said. He had the darkest expression I had ever seen on his face. My father’s eyes hardened, and without a word he stalked off.

“Typical.” My brother shook his head and turned to my mother.

“Here’s your pendant, Jean,” Elizabeth said, handing the necklace to my mother.

“What should we do now? It’s almost dark,” My mother said as she put it on.

“Let’s just go home. We can deal with the rest of her stuff tomorrow.” Elizabeth took my mother’s hand and led her down the hill. My brother took a deep breath, looking down and the freshly spread ashes.

“I love you,” He whispered to them. It was the first time he had ever said that to me. He followed Elizabeth and my mother down the hill, and I could not believe that I had witnessed. When I followed them down the hill, he stopped and turned as though he could see me.

Lauren Rollins is a college student and this is her first published work.