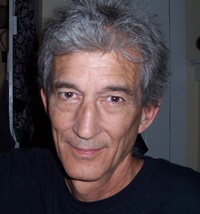 Tucker turned down Morris and walked past the house. TV flashed above the curtains. Since coming home from the hospital Ray watched movies all night. Said it took her mind off things, August, the dog days, one more anniversary, no more Christmases. Tucker flicked his cigarette and kept walking, two blocks to the underpass, across the lot to Justin’s pickup idling by the car wash.

J checked his watch. “The watchman snuck off to the tit bar, just like you said. Connie’s been feeding him drinks.”

“They say Monday we get two feet. Fucking winter, eh?”

“No sweat,” Justin put it in gear. “Pitchers and catchers in fifteen days.”

They drove south along the river, past the steam works to the fenced in lot behind the UPS center. Nothing here, no one around, Billy Stiles swung the gate open and jumped in back. Justin circled a bin of cinders and parked by the dispatch shed.

“The others are down there already,” Billy led them inside. “Give us three hours and we’ll clean it out.”

“Take the Cargo city exit, the lot behind warehouse 3.”  Tucker pulled on a Penndot parka. “The cops don’t swing by here until the bars close. Anyone comes I’ll handle it.

He hit a switch and the lot went up in floodlights.

“I’d sure feel better doing this in the dark,” Billy grumbled.

“That would look suspicious.” Tucker slipped a smoke from the watchman’s pack. “Grab a hardhat, let’s go.”

They cut between front-end loaders, gave a toot to the one running. Three trucks idled by the mountains of road salt, Vic and Bigs swilling coffee like real Penndot guys. Richie wheeled the loader around and scooped a load. Tucker watched for a while then walked back to the gate. The cold felt good. Three truckloads every thirty minutes, by midnight half the mountain was gone. Tucker stayed by the shed to head off trouble. The phones never rang once.

Bigs was just passing through when headlights turned in behind him.

“Go ahead, Bigs!” Tucker pulled on a knit cap and flipped down his safety goggles.

The headlights pulled up, the window rolled down, big guy, whisky on his breath.

“Brass got word someone was gonna steal the salt,” Tucker leaned in. “They sent us over from Southwest to move it.”

“Steal it? Jesus, that would take all night!”

“Where the hell you taking it?”

“The stadium parking lot, if you can believe it,” Tucker waved Billy through. “Bad idea, if you ask me, but orders are orders.”

Tucker checked his clipboard. “Kopechene, yeah, he signed off.”

“What I think? Bad winter, heads start to roll, know what I’m saying?”

Vic drove the last of it out a little past one. Returning the trucks meant cutting it close but Tucker liked things neat, the keys on the hook, the gear hanging right where they found it. Billie killed the lights and locked up. Justin followed Vic’s taillights out the service road to Snyder Ave. They caught the third light red and watched the cruiser hook the turn.

“Hey, a miss is as good as a mile,” Tucker grinned.

“Aw, honey you shouldn’t stay up all night.”

“I was worried. Where were you Tuck?”

“Come on now,” he sat beside her, took her hand. “Jesus, Ray, you’re freezing here.”

“No, I’m fine. Fannie came over to help with my meds. Then this strange movie came on.”

Ray looked away. “This man was married to one woman in San Francisco and another in Los Angeles. He wasn’t even that handsome but he loved them both and they loved him. Based on a true story, like they say, but really, how is it possible? You could slip a girlfriend by me, maybe, but a whole other wife?”

“No,” she closed her eyes. “So many things are impossible.”

Tucker could see through her skin, the milky pale of a ghost. What killed him most, he already missed her.

“They keep me sane,” her eyes flipped open. “Where were you, Tuck? I don’t ever know anymore.”

“The game ran late. Then I ran into Vic and we closed out Brennan’s.”

“Poor Tucker,” she stroked his arm. “All night slaving over a poker table.”

The next movie up was “Manhattan Melodrama”. Halfway through the credits Tucker was snoring.

The Daily News ran with SALTED AWAY over a front page shot of an empty lot. The mayor called a press conference and posted a reward. All day Sunday you could feel snow coming. The mayor was eating dinner when the first call came.

“Fifty grand gets you your salt back.”

The mayor signaled an aide and pushed his plate aside. “Forget it wise guy. I don’t deal with scum.”

“With all due respect, you’re up to your ears.”

“God damn punk,” Mayor pounded the desk. “You think you can hold the city hostage?”

It was snowing at first light. Tucker waited for it to stick. The mayor was eating breakfast when the second call came.

“Sixty grand plus ten for every inch.”

Mayor grunted. “You fucked yourself, cowboy. I can get it from Delaware for half that.”

“Save it, boss. Nobody’s giving up theirs in a blizzard and we both know it. Take the deal before the price doubles.”

“Mayor says he can get it from Delaware.”

“Not a shaker full. It’s in the fucking news,” Vic slapped the paper. “What’s he think we can’t read?”
“He’s a hothead,” Tucker flipped the cell. “That’s why we voted for him. Let the suck-ups work on it. Fifteen minutes.”

“Fifty stinkin’ grand, like it’s the crime of the century.”

“What about those bags of salt in my truck?” Justin asked.

“Those are for Pennsport.”

“Working class hero, totally Tucker,” Richie snickered. “And where the fuck is Bigs with my sandwich?”

They were a good crew, Tucker’s best. The money was small but this was payback. Last year Chestnut Hill got the salt while Pennsport got buried. That would never happen again.

“We got a problem,” Justin muttered.

They all looked over.

But only for an hour, long enough for the morning rush then back with a vengeance. The third call came while the mayor was at lunch.

“If you waited five minutes you coulda caught me on the crapper,” he growled. “But then you probably knew that.”

“Leave the money on the steps of Wordsworth Elementary. Cash in a gym bag.”

Two detectives and a secretary popped in but the mayor waved them off.

“Listen smart guy, how do I know you even have the salt?”

“Don’t think I don’t know what this is,” mayor snarled.

At 10:35 a thin black kid pushed out the school’s front door, snatched the bag and dashed back inside. By the time the cops caught up with him the bag was gone.

The kid looked them back and forth. “Ion’t know.”

“You seen him around?”

“Behind the gym. He was there.”

Cops looked to the principal.

“There was an incident. Stanford here was accosted-“

Black cop perked up. “How’d you make out?”

Principal rolled his eyes. “One landed in the ER, the other’s in jail where he belongs.”

“This man,” black detective flipped a pad. “What did he look like?”

Kid pretended to think. “I forget.”

White cop slammed his hand on the desk. “What’d you do with the bag, punk?”

“These are police officers, Stanford.”

The kid looked them back and forth.

“We’re not getting anywhere with this,” white cop ranted. “I say we take him downtown.”

“Easy Palmer, the kid’s just nervous,” black cop leaned in. “Relax son, we’re not gonna hurt you. Did you give the bag to someone?”

The search came up empty.

“How’d we do?” Bigs’ baritone crackled.

“Did just fine,” the janitor chuckled. “Sanford left them in the dust, didn’t I tell you?”

“That you did, Pops. Little man can fly.”

“You want me to take the bag home with me, Bigs?”

“At’s OK, just hold on to it. I’ll be around when the dust settles.”

“Got it stuck away where no one will find it.”

The last call came while the mayor was on the can.

“Airport exit to Cargo City, the lot behind warehouse D. Nice doing business with you.”

Tom Larsen has been a fiction writer for fifteen years and his work has appeared in Newsday, Best American Mystery Stories, Puerto del Sol, Adelaide and the LA Review. His novels FLAWED and INTO THE FIRE are available through Amazon.