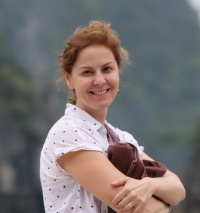 My own mother does this too—goofs up the name people, places and things. I used to think she was doing it on purpose to get a laugh. It drives me bonkers probably because it also scares me. Now I realize it’s not funny.

Something has happened to my brain.

I’ve lost the ability to conjure up the name of books. In my book circle, The Handmaid’s Tale has turned into The Handmaiden’s Life and most of my sympathetic (and older) friends go with it.

Forget trying to recall anyplace with an unusual name. Every Christmas, we go to the ChristKindlMarket and every Christmas, I call it the Kris Kringle Market, as my children roll their eyes and focus hard on their hot chocolate.

But it’s not only incorrectly naming things. I’ve also started mispronouncing words and carrying on like I’ve done no such thing.

“Everyone needs to broosh their teeth and get ready for bed”

“Broosh your teeth?!” I hear several giggles among the ranks.

“That’s what I said, everyone needs to brush their teeth.” I pretend to repeat myself, “Quit stalling!”

More than once I have flat-out forgotten entire species of animals and their plural forms. This is not like a duckbill platypus situation. I’m forgetting animal and animi that I’ve been able to identify since I was three.

“Kids, look over there at the ducks.” I point out the window of the car.

“That is a goose,” my husband corrects me.

“Kids, look over there at the gooses.”

“Geese,” he says under his breath.

“Aren’t they beautiful?” I gush.

I’m a writer. My currency is in words and my words are slowly diminishing. Who’s going to pay the price?

Certainly not my husband. He’s happily cashing in on my faulty wiring, especially when I say things like, “Man, that Eel’s concert was the penultimate.” The fact that I still go to concerts has to make me somewhat hip, right?

Never one to let it slide, my husband urges me to continue, to share with him my meaning of the word penultimate. I know enough to know that I’ve gotten it wrong, but I can’t go back now. I also know that the word I want is hiding behind my tongue, playing some deranged game of hide and seek with my brain. Even after counting to ten, it won’t come out.

I silently will the meaning of penultimate to change before my husband’s ears.

“You know, the best ever. The ultimate, ultimate,” I say with complete authority.

I do but it’s too late. Forevermore in our house, the definition of penultimate is not one you’ll find published in Marriam Webster. Now when dinner is a notch above average, say I serve the family two types of veggies, Mi Armoire lets me know how ultimate, ultimate I am. Did you catch that last one? I did and I did it with purpose. Or was it on purpose? Whatever. There’s still a little blood left in this stone and I’m going to write ‘till it’s dry.

Gretchen Weaver is a freelance writer living in Chicago with her husband, 4 children, 2 dogs, 1 cat and a lizard called Gordon. She has worked in advertising for the last twenty years and is working on her first memoir.