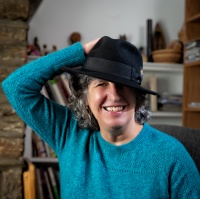 Tell us a bit about yourself—something that we will not find in the official author’s bio?

I’ve recently remembered that when I was a college student studying to be an anthropologist, I had ambitions to write popular fiction that would reach a wide variety of people and help them to think about social issues I cared about in a gentle way.  I think that may be what I have attempted with The Other Side of a Tapestry all these years later. Although this was not planned, it seems like it confirms the truth of the old saying that what goes around, comes around.

Do you remember what was your first story (article, essay or poem) about and when did you write it?   In my prior life, I wrote many non-fiction pieces.  The first of these to be published was a study of prehistoric rock art found in an uninhabited island in the Palau Islands of Micronesia.  The article was published as an appendix (Appendix 4) of Douglas Osborne’s Archaeological Test Excavations Palau Islands 1968-1969.  Micronesica Journal of the University of Guam.

What is the title of your latest book and what inspired it?The Other Side of a Tapestry was inspired by events in my own early life, specifically a memory of my mother telling me that I did not love Evita as our family was flying over the Andes Mountains when we left Argentina in 1953.  It started me thinking about how being abruptly removed from the only life I had known affected my later years.  While the rest of the story is primarily fiction, writing the book gave me a fun and fanciful way to explain how it could have gone down.  The title refers to the basic truth in life that much of what we know, even about our own lives, is often much more complicated by decisions made by other people.

How long did it take you to write your latest work and how fast do you write?I drafted this 325 page novel in about six months; then took another year or so to share with friends and revise.   Ultimately, the process took around two years.  I am a fast writer, but that’s probably because I don’t dwell on awkwardness.  I spent my entire career writing long reports and found it easiest to get it all down, then revising more carefully.  This is my first attempt at writing fiction, and because it was primarily a product of my imagination, I found myself waking up in the morning with new dialog and scenes in my head.  When I went back to revise, it was usually to change things to make them feel more authentic and in tune with the characters as they evolved.

Do you have any unusual writing habits?  I believe I do my best thinking when I’m asleep, when I allow my subconscious mind to do the work, so when I get stuck in my writing, I close my eyes and try to make my last thoughts focus on the question I need to solve.  It often works.  Also, I’m not sure this is unusual, but the more I got into it, the more the characters took over the story.  Sometimes they moved forward faster than me, but I came to respect their viewpoints and changed things to make their actions feel more authentic.

Is writing the only form of artistic expression you utilize, or is there more to your creativity than just writing?  I like to think I have a creative mind and I’m open to inspiration from all art, but I suppose if there is another art form, in addition to literature that influences my writing, it would be music.  Music has the power to take me places I can’t put into words but I do find myself trying to provide this experience to my characters.

Authors and books that have influenced your writings?  I have always been an avid reader, of both fiction and nonfiction, and there are a huge number of authors, both current and classical, I read and admire, whose work has undoubtedly, at least, aspirationally, affected how I write.  Jane Austen’s ability to describe the nuances of human communication has always been an inspiration. I know I value readability above all else, and of course, recall some books I could not put down. Off the top of my head, I remember having this experience with The Mists of Avalon, by Marion Zimmer Bradley, The Quincunx, by Charles Palliser,  Wuthering Heights, by Emily Bronte, but I know there have been many more.  But I was not thinking about any of them specifically when I wrote this book.

What are you working on right now?  Anything new cooking in the wordsmith’s kitchen? I am currently working on two novels.  One of these is a sequel/prequel to The Other Side of a Tapestry that will hopefully tie up some of its loose ends. The other is a very different story that seems to be taking priority at the moment. While both have working titles, Rocco and Sybil, and Ofelia’s Story, it’s very unlikely they will be the final titles.

Did you ever think about the profile of your readers?  What do you think—who reads and who should read your books?  Good question—I think about the profile of my reader all the time. While I would love for it to be interesting to everyone, the most likely fan is a person (probably female) who grew up in the 1950s and 1960s and experienced some of the events that affect the characters and perhaps recognize something of themselves in the main characters.  Feedback so far indicates that people like and relate to the characters, and find the connection with 20th Century Argentine (and American) history intriguing.  I think it would be great if younger people read it because it could help them to understand what was going on in the world during the second half of the 20th century, through the eyes of everyday people who lived it.

Do you have any advice for new writers/authors?  My advice for new writers—just sit down and write.  Don’t expect anything to gel at first and don’t judge yourself negatively because it doesn’t necessarily flow from your pen brilliantly.  And read read read.  If this isn’t fun, don’t do it. I do believe the reader can tell if you had to suffer too much.  But then again, I am a new author who wrote this first novel in my early 70s.  I’m not sure I would’ve chosen writing fiction as a career when I was young.  As a retiree, I was able to do this with no pressure, which definitely contributed to my enjoyment. I had the time to think about everything I was writing.

What is the best advice (about writing) you have ever heard? Just do it—and don’t share drafts with too many people.

How many books do you read annually and what are you reading now?  What is your favorite literary genre?  I read all the time and usually have four or five books going at once so it’s hard to count.  I am currently reading a book about the search for ardipithecus fossils some believe to be our earliest hominid ancestor called Fossil Men by Kermit Patterson, and at the same time, The Labryinth of the Spirits, by Carlos Ruiz Zafon, a thriller, fourth in a series called the Cemetery of Forgotten Books that takes place in 1930s Barcelona.  I just love to read both for learning and getting caught up in stories and characters.  Lately I’ve been binging on nonfiction books about human evolution that are catching me up on a passion I developed in college but have neglected while the field blossomed exponentially.  But I always read the latest books by some of my favorite authors. In fiction, to name a few: Walter Mosley, Louise Penny, Tana French,  Caryl Ferey, Kate Atkinson, Donna Tartt, Joseph Kanon, Martin Cruz Smith, Ann Patchett, Gabriel Garcia Marquez, Peter Hoeg, Barbara Kingsolver, Jonathan Frantzen, Elena Ferrante, and Stephen Carter. In fiction, I think my favorite books are peopled with interesting characters and include some kind of mystery.

What do you deem the most relevant about your writing?  What is the most important to be remembered by readers? Coming from an academic background, I can’t help wanting my readers to learn from my writing.  The Other Side of a Tapestry includes an attempt to gently make people aware of the third culture child phenomena and how it can impact a person’s life, how decisions made by adults can impact the lives of their children, the history and culture of Argentina and how it fits into 20th Century world history, and the role spiritual beliefs (both real and potential) can play in helping us to respect commonalities we all share.

What is your opinion about the publishing industry today and about the ways authors can best fit into the new trends? I honestly don’t know much about the publishing industry today except that I am very happy there are independent publishing houses like Adelaide Books that are willing to consider works by unknown authors.  It is my impression that much of the publishing world is closed to anything that isn’t an established financial winner.  I might add that I’m intrigued by the various formats one can read but so far find navigating them a little confusing.  The good news for me is that I still enjoy holding a book in my hands and turning its pages.