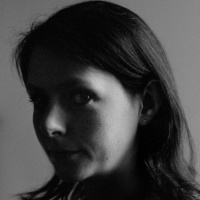 “I find bits of scrap metal beneath her bed
from boys who bury promises in her belly.”
—Kristina Haynes

Her body was a junkyard: a potpourri
of someone else’s tired mess—a regurgitated

the protruding pieces that didn’t
fit; they kept on clunking together

with her frozen blender arms, poking
through her stretched-out minnie

mouse T-shirt. She’s lost some parts lately:
some she gave & some were stolen
by boys with metal detector eyes
whose mere glance turned her jagged

bits to rust. They never found dimes in her landfill
garbage lot, so they’d throw her parts back
at her— discarded once again.

She begged one to take her
oldest leftover: an old rubber

of perished hopes & dreams & teenage pep-
permint gum. (He wouldn’t take it
no matter how much she eyelashed)

She gouged the thing off (bled self-
respect & grime), tried drowning it in rusty
tears— it grew back twice its size.

Little girls, do not despair.

Even if your days are mostly overcast
and your clothes are battered & full of holes
just wait— stone-soundless. Someone will
switch on your sun, give you a ball gown.

Little girls, Cinderella didn’t go
to college or get a job. A prince with magnets
for hands reeled in her heavy heart, sewed
strings to ankles & wrists. She jerked with every
flick of his calloused man-fingers.
She may have been tangled & mangled
but she stumbled [forever] drunk off that low-cut
baby blue brain-cell slayer—
smile plastered to her face, a hole just spackled.

Little girls, if a man whose gold
tassels bounce from his shoulders
can put a shoe on your naked
foot, run away with him, for the sunset
is waiting.

Sugar and spice should sit cross-
legged, ruler-straight in the mixing
bowl while Prince Charming cracks
the eggs & douses you with fat-
free milk. He’ll beat & bake & cut
you up for the whole kingdom
to devour.

A Sestina for You

Your letters used to taste sweet:
awaken my tongue & slither my heart.
You lit a candle we watched burn,
we traveled my arteries (just to get lost).
I breathed nothing but you & it was enough—
until you tossed me a buoy and started to pull.

I got up for air, found myself lost:
Where had you gone? (Where was my heart?)
I coughed you up; you left a burn
like my first swig of vodka I thought would be sweet.
I tried opening your door; you kept pulling
it shut. I guess you had enough.

All I can feel now is that burn
like the sun roasting my sweet
skin. You tug me and shove me, keep getting me lost—
your heart
is the moon: won’t stop pulling
my tides… Enough!

You’ve weaseled to my brain, pulling
strings sewed to my heart—
(I emptied my organs, but that one’s still lost.)
You lit another candle, it’s making me sweat.
I trace my finger through the flame, watch it blister & burn:
a singe I can’t resist, I just can’t get enough.

Now your letters do nothing but burn,
turn mine into ice: they’re shattered, falling like sweet
rain. You are lost—
it’s okay, it’s your heart
that’s at fault. It’s got strings on it, too: she is pulling
at yours, and you can’t get enough.

Open my eyes: everyone’s staggering lost
in this crimson sea of massacred hearts.
Can’t stop licking the blood, it’s possessing, so sweet—
but like that straight shot of vodka, it scorches, it burns.
I had a heavy, glass bottle-full, but that, too, I lost to the pull
of a fraying heart that just can’t get enough.

You don’t feel your heart until it is dumped in a lost
& found scarred with sweet honey bleach & burned & still not enough.

Margot Hughes’ work has previously been published in Gandy Dancer, Spelk, and is forthcoming in The Magnolia Review. Currently, she is pursuing her MFA in Creative Writing and Literature at Stony Brook University, where she studies under Susan Scarf Merrell, Roger Rosenblatt, and Amy Hempel. She holds a BA in English with a concentration in Creative Writing from SUNY Geneseo, and formerly worked in television production at Comedy Central.