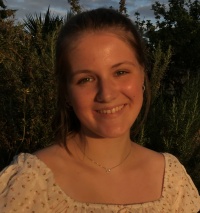 Ever since I was a child, I knew I wanted to be beautiful. The kind of beautiful that merits a second glance when walking down the street, so beautiful like a model or actress with full pink lips, a swan-like neck, little pools along the collarbone, dazzly, glossy eyes and a smile that is as seductive as it is sweet. I was 10 years old when I realized that I would never be that beautiful. The experience of change rooms and family trips to the pool suddenly became something to dread. In grade four, when puberty hits and training bras are the newest topic, and grade five when boys and girlfriends and crushes begin to be the talk of the playground, being pretty starts to be more important. I didn’t actually start wearing a bra until middle school.

I’ve had eczema ever since I was born. Little six pound, fresh out of the womb Grace came onto this Earth with a little patch of rash on her forehead. This wasn’t too surprising, as both my mum and my grandma share the same skin disease. Eczema held my hand through junior school, its constant presence on my legs like ivy growing up an old building. Except I wasn’t a sturdy, well built structure; I was a little 8 year old whose heart broke over Justin Bieber and Troy Bolton and who wore a different headband everyday. When I entered middle school, three years of melodramatic, soul sucking, crushing fun, my eczema moved to my face and established itself onto a patch around my mouth. The thing about eczema is that it’s not just itchy. It blisters and weeps a transparent pus and burns. It’s uncomfortable. Especially at school, it made staying focused a strenuous task, specifically to a 13 year old daydreamer.

Then, in grade seven, the rash around my mouth manifested into something bigger, something much worse, and spread to my whole body. The entirety of my figure was covered in red scales, like a fish that spent too long in the sun. My face grew puffy, and my eyes couldn’t open all the way when I woke up in the morning. I remember crying everyday, grieving over the heartbreak of being so terribly unbeautiful. We tried every cream, potion, pill, tincture and therapy known to the world. Here I have compiled Grace’s Top Five Best Eczema Moments:

Now, there isn’t anything wrong with me, I’m not a mutant with a flesh eating disease. I just have a bad case of eczema, or atopic dermatitis, the fancy medical name. But to middle school Grace, I was contagious, I was weird. Most of all, I wasn’t beautiful. This somehow was the worst of it all. Still, that’s the thing about being a teenage girl. The immense pressure of being perfect, of being exceptionally good and pure, while remaining wildly irresistible. The thin line between trying harder and trying too hard blurring constantly. And no matter how hard I tried, doing my hair differently, painting pretty, glittery colours to my eyelids, or applying black mascara to my lashes to try and make my green eyes pop, it was never enough. I was never enough. I was so heavily influenced by the people around me. Social media didn’t help much either.

A couple of years ago I watched a movie called ‘I Feel Pretty’ starring Amy Schumer. Something about the lovable and funny, yet plain in society’s eyes, main character connected with me. But of course, she lacked the key ingredient to a happy life: confidence. The confidence to find a nice guy and move up in her career, two things 13 year old Grace could definitely relate to! However, I could in the way that I felt the same harsh prickle of disappointment when looking in the mirror as she did in the movie. I felt the same yearning to take life by the collar and demand it look at me. Naturally, in the Hollywood way, she gets the guy in the end, the right guy though, the job, and the life she always wanted. But not having changed a thing about her appearance, just her attitude. Maybe I should’ve tried falling off an exercise bike. One probably has to watch the movie to understand that reference.

The green monster of jealousy overtook me and my blood started to drip with disdain for the people around me. My friends, my sister, and the models in magazines. But jealousy is heart wrenching and exhausting. It is so tiring being angry all the time, especially at those you love. My beautiful friends, with their beautiful clear skin made me feel singled out and alone. What I didn’t understand then was everyone has their thing, their “rash”, so to speak. All my friends, who were perfect in my mind, had their insecurities that probably ran as deep as mine did. I didn’t yet comprehend that we are all constantly battling ourselves. That I wasn’t the first person in the world to feel unworthy or insecure. Though, that was the difficulty of being a middle schooler, we were self absorbed. Not in a vain, I’m so much better than you way, but in a vulnerable, everyone is paying attention to me way.

But nothing really lasts forever, and in March 2016, during spring break, my family went to the Children’s Hospital in Vancouver. Following a few long hours waiting in a typical blindingly white hospital room, I was given a wondrous new cream and moisturizing routine that seemed to finally give my skin life. After Vancouver, we drove to Oregon to go skiing. My sister spent the car ride there peeling my old skin. I was molting like a snake; I had finally outgrown my skin.

Eczema helped me discover the importance of family and support. It has taught me resilience and positivity. It has helped me find the people, my true friends who are there to turn tears into laughter. I’m trying to be my own perfectly unique version of beautiful that is compared to or based on no one else but me. I’m Grace beautiful. Not anyone else’s rendition, understanding, or expectation of what being beautiful looks like. I am beautiful because I am happy and peaceful, and most importantly, loved. By my friends and family, and by me.

Grace Meadows is a high school student from British Columbia, Canada, who always has had a passion for writing.