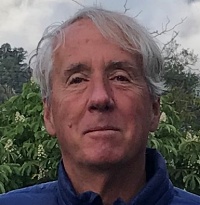 As mother raised her fist to knock on the white door, she paused and glanced back at me.

“Please take your cap off.”

“That’s what little gentlemen do,” she added in a cartoonish sing-song I’d never heard from her. But then, she’d never called me a gentleman before, either. Little or otherwise.

I was on spring vacation. I wanted to be home with my friends, on the green island where we lived a half-hour ferry ride to the west. Instead, we stood beneath a milky gob of April morning sun before a white door in the city.

I was too young for Dickens, as you’ll soon learn, but when the door opened, even in my eleven-year-old brain, I somehow wasn’t surprised at the figure standing there from another time, her parchment-white skin luminous against the background gloom.

“Thomas,” my mother said. I had always been Tom until mother knocked on the white door. She shook my hand. Her hand was soft as a very old, maybe expensive, leather glove.

She led us into “the drawing room.” I saw she was quick on her feet.

And then there I was sitting on a soft sofa beside my mother, staring at a sidewalk maple glittering in the mid-morning sun on the other side of a closed window.

Mabel stood over us and clapped her hands. “Tea will be ready toot sweet.” Of course, I didn’t know what those last two words meant, let alone that she mangled the French phrase in the usual American way.

And yes, her name was Mabel. Rich as Croesus. Or, as my mother put it: “Lots and lots of money.” Inherited wealth from her banker dad Back East where she grew up, so the story went.

Then she was off to the kitchen. Her thin, calico dress seemed fashionable in a simple way. She seemed like someone who had once been attractive, or, at least, radiantly cheerful. Mabel brought out three cups of tea on a tray and white, powdery Russian tea cakes. Before she poured the third cup, Mabel glanced at mother from across the dark, wooden, low table between our couches a dozen or so feet apart.

The gossip resumed and I returned my gaze to the window. An occasional car went by below.

Sometimes a breeze off the harbor moved through the new, green leaves of the maple, making starbursts of sunlight. A thin hum, like a distant lathe, came from the harbor a ten-minute walk down the hill. This was a quiet, leafy part of Seattle, with small restaurants and old mansions.

Mother and I were in one of those mansions.

Conversation in the “drawing room,” between my mother and Mabel proceeded as if I didn’t exist. I sat there, trapped on spring vacation, and gazed out at the green maple. My green Little League cap — we were the Shamrocks — lay in my lap. I supposed that’s where little gentlemen rested their baseball caps.

Mabel, ninety-two, had retained something of a teenage girl: quick, sparrow-like movements; always on the verge of laughter; dramatic pauses. Even old, she was a verb, not a noun.

Mabel never worked. Neither did her sister Florence. Yes, Florence. Mabel and Florence. They read musty books, traveled to the European capitals, visited their beloved Ireland in the early 1930s, and paid homage to their parents’ birthplace in Roscommon. Seattle had been their home since early 1920s. They hosted parties, showed up at exhibit openings at the nearby art museum, and attended Mass at the nearby cathedral at least three times a week.                          Mike Dillon…3

Florence made it to eighty-nine. She’d been dead fifteen months.

“I don’t have to sneak my cigarettes anymore,” Mabel mock-whispered. “But I won’t smoke in front of the boy.” I turned my hat over in my lap.

Mother quickly glanced across the room to the plates and cups on the sideboard. I knew that change-the-subject maneuver.

“Spode from England?” I’d never heard the word “Spode” from my mother’s mouth before.

Art work, mostly family portraits, hung on the butter-colored walls. The paintings were dark in the Munich School mode of the late nineteenth century. I would come to know the style one day because that’s the kind of stuff that still hangs in a nearby museum founded by a rich Seattle couple, long dead, who collected it. Mabel and Florence knew the rich couple well, of course.

The cathedral bells marked the ten o’clock hour. I counted each tenor chime as I watched the maple flicker in the brilliant April morning sunshine.

“Archbishop comes tomorrow,” Mabel confided. “It’s a short walk. He comes once a week, at least, to make sure I haven’t given away my money.”

“Now Mabel,” said mother in mock horror. I looked away from the window to my great-great aunt.

Mabel was getting interesting.

After a few minutes I heard my name.

I looked over. Mother was saying: “No, he hasn’t read Dickens yet. That comes the first year of high school.”

“O what a shame.” With theatrical dismay, Mabel furrowed her brow and lowered her voice. “Now is the time for Dickens. There is no greater beginning in a novel than that of David Copperfield.” She closed her eyes, put both hands upon her breast as if to keep a small bird in, and spoke: Whether I shall turn out to be the hero of my own life, or whether that station will be held by anybody else, these pages must show.

“Isn’t that a lovely thing to tuck into a young boy’s pocket?” she sighed, looking up at the high ceiling. I suddenly remembered I had an open pack of Wrigley’s Spearmint gum in my jeans pocket, which I had been ordered not to chew.

Mother shot a look towards my lap. I was fussing with my Little League cap again.

After a pause Mabel declared: “I was born two years after Mr. Lincoln passed.” Her eyes drifted off.

I looked at her with growing respect.

“Ask Thomas anything you want about the Civil War,” mother said, picking up what might be a winning thread. I sat up at the prospect of being useful in this strange house.

Mabel set her teacup and saucer on the table.

“How hard shall I make it?”

So, she’d thrown me a knuckle ball with spit on it. If it wasn’t Grant, then how was I supposed to know? And if it was Grant, why would she ask? I’d thought about it before. Why wouldn’t it be Grant? On the other hand, sometimes maybe famous dead people get switched around. Dillon..6

“I am,” I said ruefully. My ears were ringing.

“Grant!” Mabel exclaimed, and clapped her hands. I looked over to the window and the flickering maple. I wanted to be high up in that tree.

“Well, here’s something to remember,” Mabel said in a soft, conspiratorial voice. She picked up her cup and saucer and balanced them on a knee.

“My father viewed Mr. Lincoln’s body in New York City. He’d been dead ten days and was somewhat altered, shall we say.”

I wasn’t that interested anymore. I was still smarting from the dirty pitch.

A robin caroled somewhere. Maybe from the maple.

“I lit a candle in the cathedral yesterday morning for Mr. Lincoln at exactly 7:22.”

No one said anything. I guess we were supposed to pause for some kind of moment.

“But I still think we’ve brought the ______ along too fast.” She said this in her girlish, enthusiastic manner . And she used the word my mother told me never to say, ever, even though it showed up in Huckleberry Finn a lot. I won’t write the word, even here.

“What more do they want?” Mabel continued. “We lost almost 400,000 of our brave, blue-coated boys to set them free. Of course, I’m not counting all the dead soldiers dressed in gray. All of whom had mothers, too, I’d like to point out.”

Silence. The robin caroled. I heard another car go by. I fiddled with my cap. There was no mantel clock, but somewhere I seemed to hear something ticking.

“I know,” my mother said, in the confidingly sheepish way I overheard her mention to my father once that a woman at their golf club was “seeing” our oil delivery man. “Besides, you can’t legislate morality.” Those last words landed firmly as a judge’s gavel.

I studied my mother: pretty, athletic, dark haired with red lipstick, dressed in her best, blue town-suit, black hat and white gloves beside her. She never dressed like that except when we took the ferry to the city.

I studied Mabel’s face; sometimes her olive-dark eyes wandered to the wall where a portrait of her parents hung. Their faces, against a dark background, shone like washed-up corpses.

“And now look at who’s in the White House,” Mabel went on. “Richard Nixon was cheated by old Joe Kennedy’s ill-gotten gains.”

“But they’re Irish,” mother offered brightly, as a way out of this.

Mabel cocked a brow. “Shanty Irish.” She drew out a long “a” in shanty

“What do you think, boy?” Her smile was warm.

“There,” she pronounced. We still hadn’t moved. The lilac beside us was jeweled and shining after last night’s rain. “Take a whiff of that,” mother said.

I was staring at her.

“It’s the true smell of spring.”

I was still staring.

“I know,” she said. “Sometimes you just have to go along with things.”

I looked up into the green maple, with its tender new leaves backlit by the sun shining on the city below, where the harbor was a hard, corrugated blue and the ferry, like a white game board piece, drifted towards the dock to take us home.

Mike Dillon lives in Indianola, Washington, a small town on Puget Sound northwest of Seattle. His most recent book is “Departures: Poetry and Prose on the Removal of Bainbridge Island’s Japanese Americans After Pearl Harbor,” from Unsolicited Press (2019).