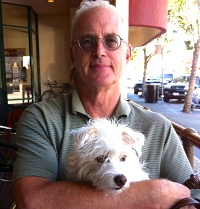 My wife, Mary, and I sit on the front porch of our Florida home. Mary is feeling nostalgic, so she asks me a syrupy question. I never feel very comfortable when Mary asks me such questions. I am not good at providing the sort of answers women like to hear.

I think for several seconds, and then I shake my head. “Am I supposed to have a favorite song?”

“Hey, don’t get defensive,” says Mary. “You aren’t required to have one. But not many people reach their seventies without having a favorite song.”

“What’s your favorite song?” I counter.

“Oh, that’s easy,” says Mary. “It’s ‘Clouds’ by Joni Mitchell. I sang that all through college back in my flower child days.”

Mary quotes a line from the song. ‘So many things I would have done, but clouds got in my way.’”

“Ya gotta watch out for those clouds,” I say.

“Now don’t change the subject,” says Mary. “Remember that two-man band you belonged to thirty years ago? And how you dragged me to those county fairs, so the pair of you could perform? Out of all songs you and Big Al played, you must surely have had a favorite.”

Big Al is the name of a social worker I knew when we lived in the Hoosier State. A bluegrass aficionado, he liked to play the banjo, and we eventually formed a two-person band we called The Sowbelly Trio. Big Al sang and picked his banjo while I accompanied him on the harmonica. We actually taped a few “albums,” and we hawked the tapes at county fairs. People said our sound wasn’t bad, but we needed someone to play bass.

“I like every one of those songs,” I tell Mary. “Bluegrass was like a first love to me. ‘Foggy Mountain Breakdown,’ ‘Fox on the Run.’ They don’t write them like that anymore.”

“Quit stalling,” says Mary. “What I want to know is what’s your favorite song?”

I think a bit longer then shake my head. “It’s going to be hard to pick one. We did make several albums.”

“Yes, I remember the names of those albums. They were really pretty silly.”

“High on the Hog, Second Litter. What’s so silly about those names?”

Mary laughs. “You know, I don’t think you took that band seriously at all. But I’m serious now, and what I want to know is what’s your favorite song?”

“My favorite song?” I mutter. I can feel myself starting to sweat. “Well, if I have to have a favorite, I guess I’d pick ‘Cotton-Eye Joe.’”

“Who was he? A runaway slave?”

“He might have been one to start with. But now he’s a metaphor.”

“You and your metaphors,” says Mary. “A metaphor for what?”

“Out of all the songs you might have selected, you had to choose ‘Cotton-Eye Joe.’”

“It’s a very popular song,” I reply. “There are over a hundred versions of it.”

Mary sighs. “That just makes it worse—metaphor or not. I forbid you to pick ‘Cotton- Eye Joe’ as your favorite song.”

“If we’re going to ask questions,” says Mary, “why did you call yourselves The Sowbelly Trio when there were just two of you?”

“It’s a catchy name. It made folks perk up and listen. Besides, we didn’t think it would be long until we got ourselves a bass player.”

“But you never did get one, did you?”

“Well, you might have helped us out. Didn’t you play the guitar back in college when you sang that song about clouds?”

Mary laughs despite herself. “Yes, I played the guitar, but I also have my pride. I would never, ever have joined a group called The Sowbelly Trio.”

“We may have been struggling,” I answer, “but we were never lost.”

“All right,” Mary says, “Quit stalling around and pick another song.”

I clear my throat and sing the chorus bars. “‘Wellll, I got me a pig back home in a pen and corn to feed him oooooon. All I need is a purty little girl to feed him when I’m goooone.’”

“You’re not helping your cause,” says Mary.

“Those have to be the most sexist phrases I have ever heard.”

“That song has different levels.”

“One level is quite enough. No woman is going to stay home all day just to feed some bumpkin’s pig,”

“Pigs have personality,” I say. “They’re also a lot of fun. That’s why we chose to name our band The Sowbelly Trio.”

“That won’t get you off the hook,” Mary says. “Now pick another song.”

I think for several seconds then decide on a Rascal Flatt number. “How about ‘God Bless the Broken Road that Led Me Straight to You’?”

“Does that apply to my favorite songs too?”

“I’ll leave you to think about that.”

Mary leaves me sitting alone on the porch, and I once again feel myself sweat. Do I really wish to part company with the songs that had won my heart? No, I must keep them alive to me—they are too much a part of my soul—so I slip my cell phone from my pocket and give Big Al a call.

Big Al is glad to hear my voice and to relive our bluegrass days. He says our band spread a whole lot of joy although it never amounted to much. He suggests we get back together soon and do a little jamming. If we can find ourselves a third member, he says, we could go back on the road.

James Hanna is a retired probation officer and a former fiction editor. His stories have appeared in over thirty journals, including Sixfold, The Literary Review, and Crack the Spine. His books, three of which have won awards, are available on Amazon.