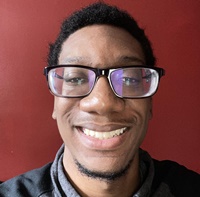 Me and my wife live in a nice cabin in the wild. Not quite in the middle of nowhere, but our nearest neighbors are in a town a couple of miles away. The wife commutes there for work during the week, while I work at home.

“Don’t forget to lock the damn door!” my wife always said before leaving.

She thinks some serial killer will break into our house one day and she’ll come home to a murder scene. Out here? Unlikely. No one comes out here, which is good. I like the quiet.

One day I was reading a book in the living room when I saw the doorknob for the front door start to move. I dreaded the oncoming lecture I was about to get when my wife came in, but it wasn’t her. It took me a second to realize what this hairy black monster was that invited itself into my house, but I figured it out quickly. It was a bear.

We’ve lived here for five years, and I’ve never once seen a bear in this damn forest. Now one is wiping its clawed feet on my welcome mat. I won’t lie, I was scared for my life. But I kept my nerves. I set the book down, slowly stood up, and walked backward toward the rear exit. My creaky floors had other plans for me though, and drew the bear’s attention to me. As I backed up, the bugger followed me until I was cornered in the kitchen.

I read somewhere that making yourself seem bigger can scare bears away. So, I stared into the bear’s cold dark eyes, threw my arms in the air, and screamed like a mad man. Taking it as a challenge, the bear got on its hind legs and now, twice my size, let out a bellowing roar that shook the walls. I couldn’t help it, I squealed like a baby. Worst of all my vain attempt at intimidation only seemed to piss the bear off more.

So there I was, cowering in my kitchen about to be this bear’s afternoon lunch. But then I remembered something; me and the wife splurged on a tomahawk steak, and were going to have it for dinner tonight. I know, it’s a terrible thought and a waste of good meat, but it beats getting mauled by a three hundred pound wild animal. I opened the fridge and dangled the beautifully marbled steak in front of me like it was a dog’s toy. The bear’s eyes tracked the hefty piece of meat, and I spotted a line of drool drip from the corner of its mouth that splattered into a puddle on the floor. I carefully guided the bear back to the living room, then outside the house, and hurled the steak as far as I could. The bear took the bait and gave chase, and I ran inside and locked the damn door. Arms shaking, I grabbed the phone and dialed 911.

“911, what’s your emergency?” asked the dispatcher.

“Hello, there is a bear outside my house and it’s eating my steak,” I said.

It took about 40 minutes for animal control to get here, and of course my new friend left by the time they arrived. Another hour later, they found the beast and told me they were going to relocate him to another place. Just when I thought the danger was over, my wife burst through the door, her long dark hair frazzled and her eyes filled with worry.

“I saw cop cars leaving our house, what happened? Are you okay?” she asked.

She gripped my arms tightly, and inspected me for any grievous wounds.

“I’m fine dear. Just a little incident with a bear. It got in the house.”

“A bear? How did—” In an instant, her face shifted from genuine concern to blind fury. “You forgot to lock the door again, didn’t you?”

“It may have slipped my mind—”

She slapped my arm before I could finish.

“I told you something bad would happen you idiot!”

I shrugged. “It was just a bear. And besides, nothing happened.” I spun around to prove my point. “See? I’m fine!”

She slapped my arm again, much harder this time.

“It could have killed you. Can’t you see that?”

I hate it when she gets mad, mostly because of what comes after. She’s not one to hold a grudge for very long, but after her anger subsides, her expression often shifts to… disappointment. Like the “I taught you better” look your parents would give you when you did something wrong. I don’t know if she does it on purpose or not, but it’s certainly effective. I mean, think about it. All of this because… what? I couldn’t be bothered to lock a damn door? I can do better. I have to. If not for my own sake, then at least for hers.

We stood there for a few moments holding each other’s gaze.

“Good.” She finally said. “Now, I haven’t eaten in hours, want to help me with dinner?”

As she opened the fridge, a look of confusion grew on her face.

Shit. This is going to be one long night.

Malik White lives in Long Island, New York, and is currently an online student at Full Sail University. Enrolled in its Creative Writing program, Malik hopes to hone his craft and create interesting and memorable stories.