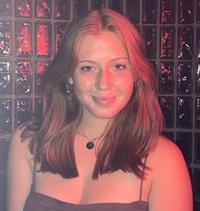 The pasta is curling around her finger like a well-trained snake.

She’s supposed to eat it, but instead she’s teaching it to obey, because she is the master of nature. She wants to be the master of the kitchen, to stick her hand in the oven and watch it come out nice crispy! like good ol fashioned turkey wings. She’s vegetarian but she knows what meat looks like. And it looks like how it tastes. If fridges were just boxes she’d package herself up and mail it off to an island, an island where there’s no spatulas or ladles. If you want it, use your hands.

She remembers that she’s cooking for her mother, so if the cocktail potatoes are ready, she can’t fish them out with her hands.

“The same hands that turned on the tap in the bathroom after you…well…you know…” her mother is going to say.

She knows that her kitchen is a metaphor for the Amazonian rainforest; where the green Anaconda sits beneath the surface and contemplates prey in the murky current. A pot of Anacondas sits abandoned on the stovetop, as she recoils the pasta from her finger and throws it at the wall. If it sticks, it’s done. She watches as it hits the wall with a kind of splat, and then, like a bloodied body being dragged from a crime scene, it makes its way down the tiles, leaving behind debris of all sorts.

She’s starting to have these nightmares, which don’t really happen at night, they’re more like daymares. And they happen when the water is boiling for the pasta or when she’s nuking the sicken schnitzels in the microwave to soften them. It’s her mother, trapped inside a melting pot of vegetable broth and assorted vegetables that have been steamed. She’s…

If you mix human suffering with three tablespoons of cubed vegetable stock, you get a roast mother.

She thinks it’s scary to see her mother in her daymares, but then again, mothers greet us all the time at the dinner table. Whether it be a chicken, or a duck, or a cow. All mothers can be steamed.

She’s standing in front of the sink and attempting to scrub the algae on the bottom of the le cruset pot. But it’s not algae, really, it’s actually the soft mushy inside of zucchini, the part right in the middle with the seeds. But sometimes it looks like algae. Sometimes it doesn’t. Food never looks the same twice. Sometimes chicken nuggets look like teeth, sometimes they aren’t molars, they’re just the only thing left in the freezer that isn’t an ice cube.

Suddenly, the doorbell is ringing.

Her mother is standing on the apartment steps, holding a rabbit’s foot.

“You wanna put this in the sauce?” Her mother asks, absentmindedly.

“You can’t make a sauce lucky,” she replies.

But she knows that isn’t true and so does her mother.

A lucky sauce is a sauce that has been cultivated from very little, a sauce whose seasoning has taken years to pluck and purify, all for the sake of accompanying something else.

No one eats sauce as a main, you drown a piece of chicken or a steak until all you can see is a wet mound and you stab your fork just to feel some substance.

But sauce is lucky because it has the power to drown. To ruin, to rectify.

In the ruins of the living room, seven years back from the day, a young girl sits with her mother as the cheese plate is devoured, everyone forgetting the courtesy of using napkins. If crumbs make it to the floor, then the floor becomes a large plate; get on your hands and knees and lick it up!

Her mother, wearing a creme sweater with a stain by the shoulder, whispers in her ear to remind the guests that “the brie is melting.”

Time melts when you eat, she has learned, because it is when you are closest to your ancestors. The ones who ate similar meals, who cooked rice or chicken or halloumi. It’s the time for remembrance, perhaps the awareness that without this meal, right now, we will die. Maybe not our bodies, not just yet, but our history will melt, faster than the cheese.

“Will you eat what I make you today?”

Her mother is sitting at the kitchen table, transfixed by the remnants of the noodle on the wall.

She can remember what tomato soup tastes like – it’s the air that hits you as soon as you step out of a car, all rush. It’s creamy like the southern butter which glides on toast easier than anything. It’s home, not the place you go back to because you want to, but you know no other tastes, and you’re bound by familiarity, so tightly that you’d rather taste the world in the same way than cook it differently.

Her mother is playing solitaire on the Ipad and stirring the soup, which bubbles and seethes every few seconds or so. A one-sided conversation.

The little girl stands next to her, too short to see the top of the pot, but she knows if she feels the heat, feels the metal on her skin, she will feel the soup tell her its ready. So she presses her hand to the pot and waits.

Folding the pastry upon itself, spitting in between the loose ends to make them stronger together. Heaving this dough onto the baking pan, loosening under the heat of the oven. But then, she thinks, maybe she’ll burn it. It’ll become a crust, sifted down the trashcan like ashes over a mountaintop. How we pay tribute to the deceased. She reduces the heat, slowly, letting her fingers guide the dial to “barely heated”. Then she looks at her small creation in the window, the way it sits, lifeless on the metal, the artificial illumination a decadent form of torture.

Chloe Komesarook is an emerging writer from the USA, who moved to Melbourne to study Creative Writing at RMIT. She has been published in the Bowen Street Press Review and enjoys reading and (at times) writing nonfiction. When she’s not reading David Sedaris on a lawn chair, she’s attempting to complete her nonfiction portfolio.