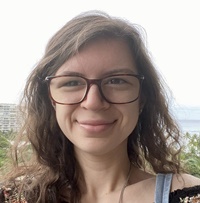 Polly Andrews is dressed up in her Sunday best, finding herself in a luxurious home ready for a get together, unaware of how she got there. However, this did not look like a joyous occasion, with everyone crying at every turn. She takes a look around at the massive house, as a melancholy feeling rises in the back of her throat.

Polly couldn’t figure out why this place felt like it was a part of her life somehow, but yet seemed so distant. She looks around at all the familiar, yet strange faces that pass her by, not paying her any mind. She tries to tap someone on the shoulder, but her fingertips evaporate by the touch of their skin.

She backs away frighten and starts to panic. “Hello? Hello? Can anyone see me?”

“It’s no use. They can’t hear or see you,” a young boy says, from behind a table full of fancy hors d’oeuvre.

“But, why not?” Polly asks, confused, with her body paralyzed of fear for the answer to come.

“I think you know why Polly,” the boy steps out from the table and puts his hand gently on her arm.

“I know everything about you,” the boy said, sensing the worry building in her face and adds, “my name is Andy. Don’t worry, I’ll help you through this process.”

“It’s okay, just follow me. I’ll show you around.”

He takes her hand and guides her into the living room, where people are crying silently and soft mummers roam through the air.

“Why does everyone seem sad? It’s so depressing in here,” Polly said, wandering around the room, staring at people that had no idea she was standing before them.

“They lost someone they love very much,” Andy replied, simply.

“Who?” she asked, curiously.

At that moment two people were embracing each other fiercely, with what seemed like brave faces, but something was obviously broken inside.

“They… look familiar. I have this dying urge to hug them and try to make them feel better, but I don’t know why. Who are they?”

“I know you have a lot of question, but there is no easy answer. Why don’t I show you something?”

She nods her head silently, as he takes her hand and they vanish just as fast as they reappear into a room, filled with stuffed animals and pink fading paint.

“Does this look familiar to you?” Andy asks, as he walks over and sits on the freshly made bed.

“A little… actually yes… yes, this is my room!” Polly said with glee, as the memories flee back to her, playing dress up and testing out make up.

Andy looks at her with a sadden expression and says, “Actually, no its not, Polly.”

She turns around confused, as her face screws up into a twisted mess trying to sort out the pictures flooding her mind.

“But it has to be. This is my room and… those two people down there… they’re my parents! I remember, I… I just know it!” she said, with her mind racing and spiraling into a different realm.

Another thought occurs and her face widens in realization and fear, “They’re crying for me, aren’t they? This ‘get together’, or whatever it’s called, is for me, isn’t it? They have to know I’m still here, I’m not dead, not yet!”

“Polly, wait. I don’t thin—” Andy starts to say, trying to reel her back to reality, but she was too hopped up on her memories, she couldn’t see the truth.

She sees the disappointment rolling over his face and turns towards the door, as she interrupts him by saying, “I’ll prove it to you! I’ll go downstairs and tell them and you’ll s—”

She stops mid-sentence, as she sees a picture hanging on the wall. The picture of Andy and his parents, with him dressed up in a tutu, looking as happy, as can be.

“Do you see now Polly? Those people aren’t grieving for you. They’re grieving for me,” Andy said, as he hops off the bed and walks towards her with his head slightly down.

Polly lifts the picture from the wall, as she leans against the door frame, sliding down, with her knees tucked into her chest, as she says, “So, I’m not the one who is dead… am I?”

Andy gives her a somber smile and shakes his head, as he says in a whisper, “No.”

“So, what happens now?” she asks, not sure how to feel.

“You go live your life. People may be grieving, Polly, but this is not a sad time, it’s a rebirth of the person you always knew you were!”

“How do I know I made the right decision? With mom and dad, they’re…”

“They’re going to love you. Just give them time to process. That’s what this whole thing is for. For you to let go of the boy you never really were and let those people that cared about you, deal with it in their own way,” he smiles and takes the picture from her hands, as he helps her from the ground and says, “Now, it’s time to go be you and don’t be afraid.”

She grins back, holding back tears, for a boy she used to be, but never truly knew. She starts to walk towards the door but turns back to say one last thing.

Before she could open her mouth to speak, she wakes up in a hospital bed, feeling the new lumps planted on her chest. Finally feeling like the person, she always knew was living inside, she smiles with sorrow and joy as she looks up at her parents waiting by the bedside, holding her hand.

Andy Pollock, was no longer here, but will forever be remember, as Polly Andrews makes her mark for the world to see.

Kandyce Hampton is a full-time writer and mom to an adorable four-legged puppy. She is a military brat and got to live on both coast of the country. She still loves to travel and has a desire to write all around the world.